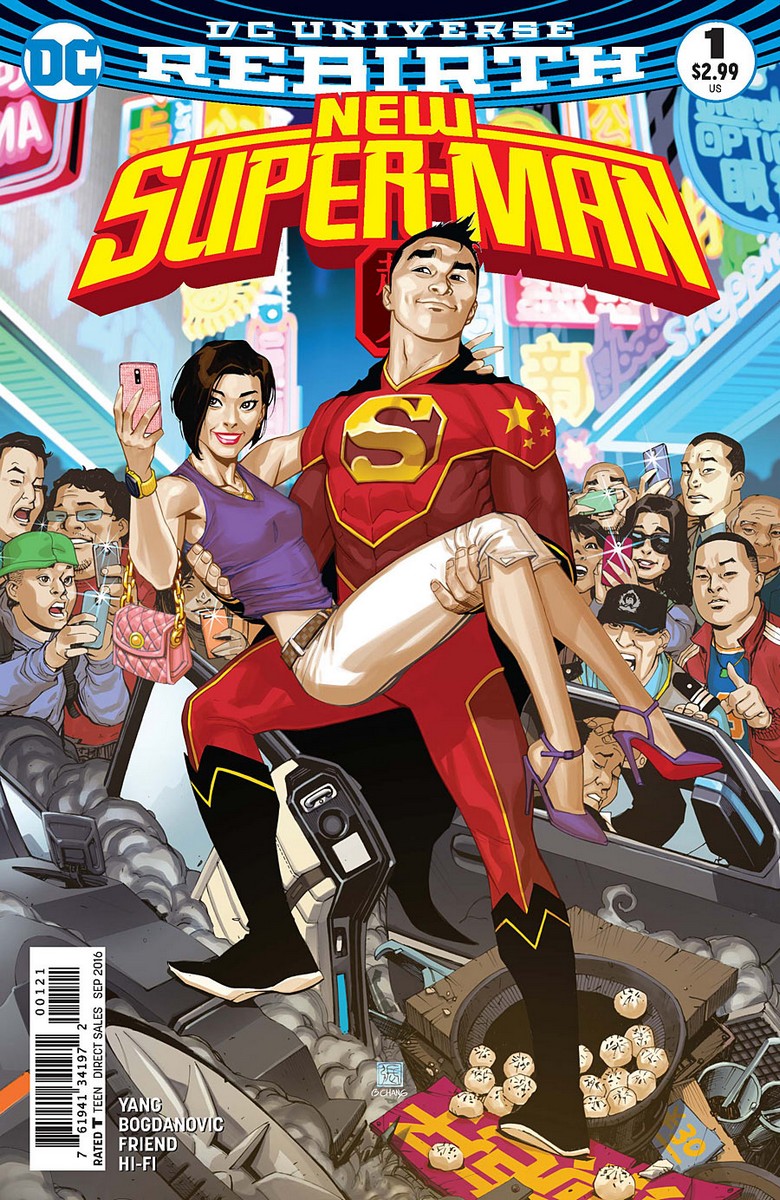 Check out Our Review [WITH SPOILERS] for New Super-Man #1

During the New 52, DC became allergic to fun. Sure, there was some standout series that didn’t take themselves too seriously, but for the most part, DC’s new generation of icons were pretty dire folks. Heck man, even Supergirl and Superboy had sharp edges to them.

The best thing one can say about New Super-Man #1 is that it is fun. Gene Luen Yang infuses his script with an old school sensibility of lightness that has been missing from DC Comics for a long time. New Super-Man #1 is not in any way a frivolous comedy though; it is a classical superhero origin told in a setting that has gone relatively ignored in comics for a long time.

Yes, this is a comic about a Chinese Superman and as a setting, Shanghai comes to life. It is a vivid city that seems modern and bright. It is a perfect stand in for Metropolis but has its own unique feel and the same can be said for the protagonist Kong Kenan. You see, Kenan is a bit of a bully. He is introduced to readers bullying a pudgy kid.

The portly victim in question is the son of an airline billionaire and is kidnapped by an armored super-villain. All of a sudden, Kong goes from bully to hero and risks his life to save the kid. This heroism draws the attention of reporter Laney Lan and a shadowy organization looking for a hero to imbue with amazing powers.

There you go; we have an origin and a complex protagonist who thinks it is okay to steal a kid’s lunch but will still risk life and limb to protect the same kid. The issue goes on to provide a tragic reason that Kong was picking on the portly kid and we are off. To be honest, I did not like Gene Luen Yang’s Superman when he was writing the flagship book, but in fairness, I barley liked anyone’s take on the New 52 Man of Steel. But in New Super-Man, Yang is in his wheelhouse.

The first issue takes a pleasant long time to read and is not in any way decompressed (something a number of DC’s new titles have fallen victim to). Yang manages to present a fresh but classical superhero origin to a very unique new character in a very fun setting. The book sometimes feels like an Elseworlds type thing, but when one remembers that Kong is a new hero in the DCU proper, New Super-Man becomes very exciting. This new title does not feel like forced diversity, it feels like a comic that the creators are passionate about and it feels like New Super-Man can be a very important addition to the DC REBIRTH Universe.

This comic has energy and purpose and I look forward to visiting Kong and friends again very soon.