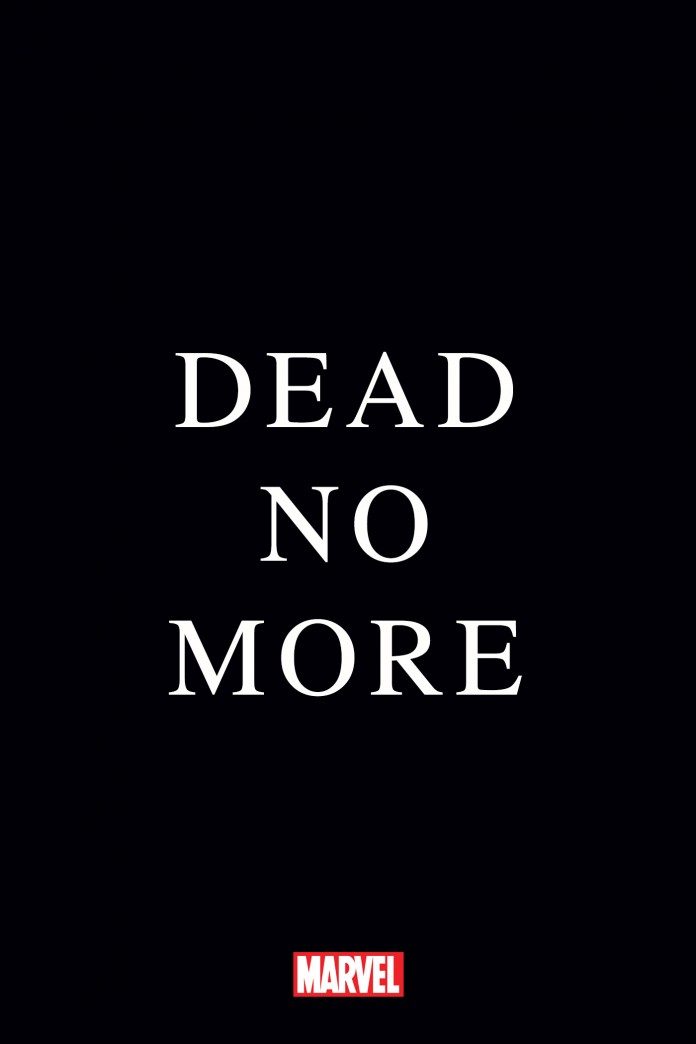 Wait, WHAT?? Recently, we received a very ominous, very laconic, very speculative banner in the guise of our regular, commonplace, official Marvel Press Release. The usual Marvel Press Release comes in the form of cover art, interior page sneak-peeks and a paragraph or 10 detailing a particular Marvel comic hitting stores in the near future, but this particular press release…well, the details here are sparse. Honestly, the word ‘sparse’ doesn’t do it justice; the word ‘nonexistent’ better describes the severe lack of information accompanying this particular promotion. See the image above? That’s all we received. No description, no additional art, just a black rectangle layered with the words, “Dead No More,” in bold, white, cautiously concise text. Hmmmm.

Of course, as was Marvel’s intention, the question of who or what is “Dead No More” is swirling like a swarm of pollen-starved bees, each equipped with an infinite number of stingers and poisoning my already inquisitive neurons with augmented, swollen inquisitiveness! AH! My brain is on FIRE! Anyway, this promotion begs the following question: just who in the F#$k IS COMING BACK TO LIFE???

Well, there’s a small Rolodex filled with Marvel characters who could be making (or re-making) a grand return to the good ol’ Marvel U. A few that come to mind:

1. Professor X. Cyclops killed his tenacious @ss with the Phoenix Force in Avengers Vs X-Men. Now, Charlie-X was always a formidable mutant, but over the last several years his presence in various X-Books was reduced to supporting member. The X-Men are all grown up and Xavier’s dream was found lacking, no longer a realistic template for the world ‘Mutanity’ found itself in. The galvanizing force behind the X-Men’s creation and their mission statement was rendered innocuous, relegating Charles to the ranks of…loser! Will he be returning? Good gravy, I hope not.

2. Jean Grey/The Phoenix. The Phoenix Force kills her, but she comes back. She dies again, but she comes back. Dies again, but this time stays dead. Honestly, I’m okay with this since her…uh…’replacement’, Emma Frost, is far more interesting than Jean Grey ever was. However, Jean Grey/The Phoenix is a Marvel comics’ staple and, due to her appearance in this year’s X-Men: Apocalypse, Marvel may want to to bring her back in the hopes of having a comic continuity marginally reflective of the forthcoming film.

3. Captain Mar-Vell. C’mon, the guy’s name is freaking Mar-Vell; he’s a freaking walking, flying advertisement for the whole of Marvel Comics! Captain Mar-Vell dies from cancer after a brief altercation with walking incendiary device, Nitro. Due to said tussle, Mar-Vell contracts terminal cancer. I hate to glorify his death, but it was a huge deal when Mar-Vell passed, effecting each and every Marvel hero when one of Marvel comic’s flagship characters shuffled off this mortal coil.

Marvel attempted to bring him back a few times, once in the alternate-universe epics Universe X and Paradise X, and again in the proper Marvel Universe after the events of Civil War. However, it turned out he was yet ANOTHER shape-shifting Skrull, so…consider that ball DROPPED! Anyway, maybe they’ll try resurrecting him again. For real, this time.

4. The Multiverse. Yep, the entire Multiverse was destroyed, a joint effort by a gaggle of jerk-face Beyonders and Doctor Doom. All the stories, all the universes telling the tales of infinite possibilities? Gone. Of course, we’re aware Doom and the Molecule Man created Battleworld in order to save a modicum of creation, but before that…EVERYTHING DIED. So, will the Multiverse return? Hmmmmm.

5. The Beyonders. As stated previously, the Beyonders, beings of unlimited power unencumbered by time, space or compassion, took it upon themselves to end the infinite folds of creation in yet another experiment induced by immortal boredom. Doom, with the help of Molecule Man and Doctor Strange, bested them and absorbed their power, BUT…they’re Beyonders. Can they actually die?? I haven’t read the final chapter of Secret Wars just yet, so maybe there’s some data I’m missing, but maybe…just maybe…they return and and entreat Doom for an opportunity to win back their title.

So, any other thoughts regarding who (or what) might be returning to the Marvel Universe? Yes? You have some? Then let us know BELOW!