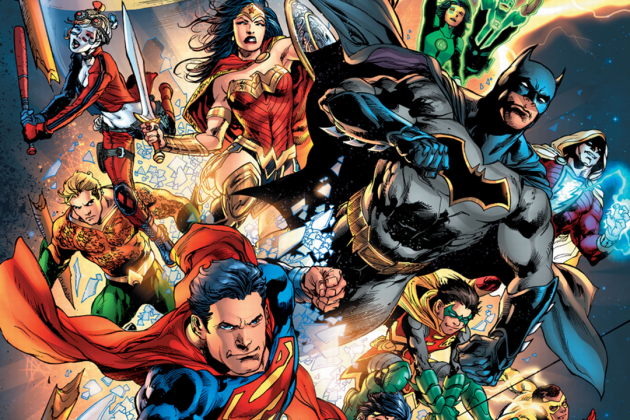 If you’re a life-long comic fan like me, then you know of the struggle when it comes to choosing solo titles or team books. Your favorite hero is front and center in his or her solo title, while in the team book you get practically everyone from that company’s lineup. If you’re on the fence while trying to decide, I’m here to help you out. So, let’s get our Jimmy Fallon on and debate the pros and cons of collecting team titles and solo comic books.

Pros: With team titles, you get all the heavy hitters of a comic company’s library. In Justice League, you get Superman, Batman, Wonder Woman, Aquaman, the Flash, Cyborg and Green Lantern (depends on which one for whatever the story calls for). Can’t go wrong with a book like that. While the current run of the book is good, during the New 52 era, Justice League was DC’s other standout book besides Batman. It seemed to attract the best talent with Geoff Johns, Jim Lee, and Ivan Reis.

Also, if you’re a fan on a budget, team books are great options. You don’t need to collect five or six different books to know what’s going on with your favorite heroes, because you get them all in one book. No need to make cost cuts to maintain your collection.

Cons: Sure, you might like Batman, Superman, or the Flash. However, you might not like EVERYONE in a comic universe. I was excited for the Justice League of America relaunch in 2006 when writer Brad Meltzer took over with artist Ed Benes. However, the first arc focused way too much on B-list character Red Tornado. Holy crap was it a snooze fest. It seemed like all Batman, Wonder Woman and Superman did was sit around a table and talk to each other in first person as they decided the new Justice League lineup. This wasn’t an exciting comic book story, it was a fantasy football draft!

The exciting Justice League of America in 2006, everyone!

Continuity is a little odd, too. Solo and team books contradict each other constantly. I wonder how Spider-Man can be in New York City fighting the latest Goblin to appear in Amazing Spider-Man, but at the same time be in the Savage Land in The Avengers? Which story is actually happening to ol’ webhead?!?!

Pros: Your favorite hero is in the spotlight. Want to know what’s going on in Gotham City and couldn’t care less about the JLA ambushing Captain Boomerang? Then a Batman solo title is for you! Not only do solo titles bring characters to prominence, they sometimes outshine the group book as well. A good example is J. Michael Straczynski’s run on The Amazing Spider-Man in the early to mid-’00s. When he was on the marquee title for Marvel along with artist John Romita Jr., it was one of the best books out on the comic market.

Straczynski’s Amazing Spider-Man was better than any of the X-Men titles, arguably better than Brian Michael Bendis and Alex Maleev’s run on Daredevil, and even better than New Avengers.

Solo titles definitely allow creative teams a lot more creative freedom. You don’t have to include everyone in a story. Some writers or artists’ styles might fit certain characters better than others and it certainly shows in some books.

Plus, some of my favorite stories came from solo titles, like Jim Lee and Jeph Loeb’s run on Batman with “Hush.”

That is an excellent story and will stand the test of time! Every month I’d look forward to the book, just waiting to see what was in store for the caped crusader as he tried to figure out who was the new crime boss in town. Easily the best book on the comic market in 2003. Pick it up, kids!

Cons: If the book stinks, then it kind of ruins the character for you. There is nothing worse than being stuck with a bad book featuring your favorite character. I remember that feeling all too well with the New 52 launch of Action Comics.

The only way to describe the Grant Morrison run on Action Comics is unreadable. The artwork by Rags Morales isn’t bad, but the story makes no sense at all. I still don’t know what Morrison tried to do. The fact that this story took place five years before the rest of the New 52 books (and didn’t tell anyone that, according to New 52 Superman writer, legendary nice guy and artist, George Perez) made it even more confusing.

Also, if you like say, three or four characters from DC or Marvel, you will have to spend more money in order to keep up with their adventures. So, as opposed to dropping $3 or $4 a month, you’ll be dropping $20 a month. And if you’re on a budget, that’s a tough pill to swallow.

So, there are my pros and cons when it comes to collecting team titles and solo series. Do you collect both? One or the other? Think I missed a few pros or cons? Let me know in the comment section below!