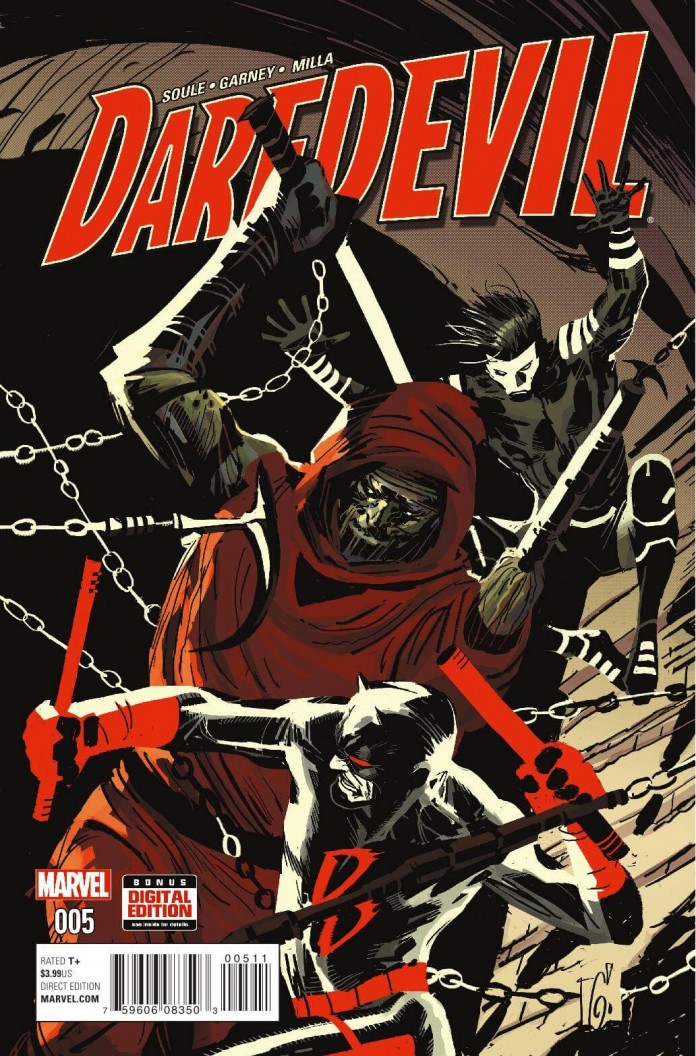 Check out Our Review [WITH SPOILERS] of Daredevil #5!

Well, now is as good a time as any to check in with Marvel’s Daredevil comic. Like Marvel’s entire line, Daredevil was relaunched as part of the All New, All Different Marvel initiative, and now, with the fan-base on a natural high thanks to the brilliance of Netflix’s second season of Daredevil, it’s a good time to be a fan of the Man Without Fear.

So how’s the comic doing? It’s a mixed bag, actually. Issue number five features the culmination of DD’s showdown with the villainous Tenfingers as the Hand comes a calling. You see, Tenfingers stole his powers from the Hand and the undead ninja cult has come to make the freakish crime lord and his family pay. Daredevil and his new apprentice, Blindspot, are caught in the middle. Little does Daredevil know that Blindspot’s mother is one of Tenfinger’s top operatives. So, Matt Murdock must protect Tenfingers from the Hand as all hell breaks loose in Hell’s Kitchen.

While Charles Soule has the tonal energy of a Daredevil comic down, his plot is muddled and the issue focuses on action over characterization. Truth be told, and in many ways, the writer should be commended for this; Soule has added many new characters to the world of Daredevil. Unfortunately, their voices all kind of meld together in a hodge-podge of concepts and ideas as the issue borders on the incoherent at times. The story is a good one but I feel like I’ve read the same comic for five issues as the characters all just kind of run in place. It’s unfair to compare Soule’s run to the previous run by Mark Waid and Chris Samnee because the latter run was so genre-defining and perfect, but the pacing and clarity of Soule ‘srun, so far, at least, has a lot to be desired. Soule’s voice for Matt Murdock is perfect but it’s like the writer is trying to do too much to leave a mark on Murdock’s world.

Ron Garney’s art suffers the same problems as at times. Things become so frenetic and muted, it’s really hard to tell what’s going on. For example, I can’t tell what the heck happened to Tenfingers at the end of the issue.