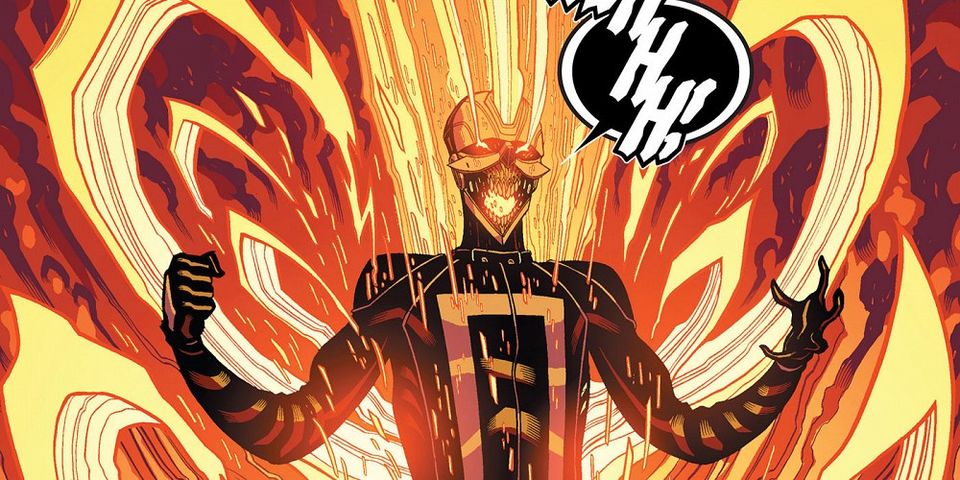 Gang, our Robbie Reyes: Ghost Rider #1 review is a little SPOILER-Y, so…check back with us after you’ve read the issue. Oh? Still here? Thank you!

The Robbie Reyes version of Ghost Rider has had a big-time spotlight shined on him of late thanks to the character’s awesome inclusion on Marvel’s Agents of SHIELD. So, now’s the time to gives Reyes and his ghostly dark passenger his own comic once again. Reyes has been a stand out on Agents of SHIELD, so this type of marketing synergy is pretty welcome and obvious. Sadly, while Reyes has been used to great effect on Marvel TV, Robbie Reyes: Ghost Rider #1 is pretty darn terrible.

Let’s hit the few good points first. The art on the main story of Robbie Reyes: Ghost Rider #1 is really good. Danilo S. Beyruth is a much more traditional artist than the Reyes’ artistic creator Tradd Moore. The more standard art style makes it seem like Reyes has now been integrated into the Marvel Universe proper. A feeling that is supported by the fact that this issue also guest stars the Totally Awesome Hulk and the X-23 version of Wolverine.

Highlight #2 is the way writer Felipe Smith handles Robbie Reyes’ brother, Gabe. For those of you who didn’t read the original Reyes Ghost Rider series, Gabe is a special needs child seemingly on the autism spectrum. The relationship between Robbie and Gabe is heartwarming and really makes the Reyes character stand out from previous incarnations of Ghost Rider. The moments between Robbie and Gabe really draw a reader in and makes Reyes seem like a true hero.

And that’s where the good stuff ends. The rest of the issue is a mish-mash of ideas and guest appearances that don’t hold together – at all. Between sequences of Robbie and Gabe you have the Amadeus Cho Hulk assisting in some kind of experiment where a rat becomes monstrous, and then after a bunch of clumsy exposition explaining Reyes’ origin and connection to Ghost Rider, you have a few pages of Reyes flirting with Wolverine. The dialogue is clunky, the pacing is atrocious, and nothing of substance happens in the entire issue. It’s all very standard superhero fare with no edge whatsoever. I’m not sure why Marvel would think that a Ghost Rider book needs to be standard and contain pretty much no horror elements — but here you go. There is a backup story where Ghost Rider fights a Harley Quinn rip-off skateboarder. It’s all very loud and obvious and the character of Reyes deserves better.

Listen, the Reyes Ghost Rider on Agents of SHIELD is an adult and much different than the youthful comic book Reyes. That’s fine; there’s room for both in the Marvel kingdom. But when the comic version is so redundant and obvious, why bother? Robbie Reyes: Ghost Rider #1 is categorically not a good comic.