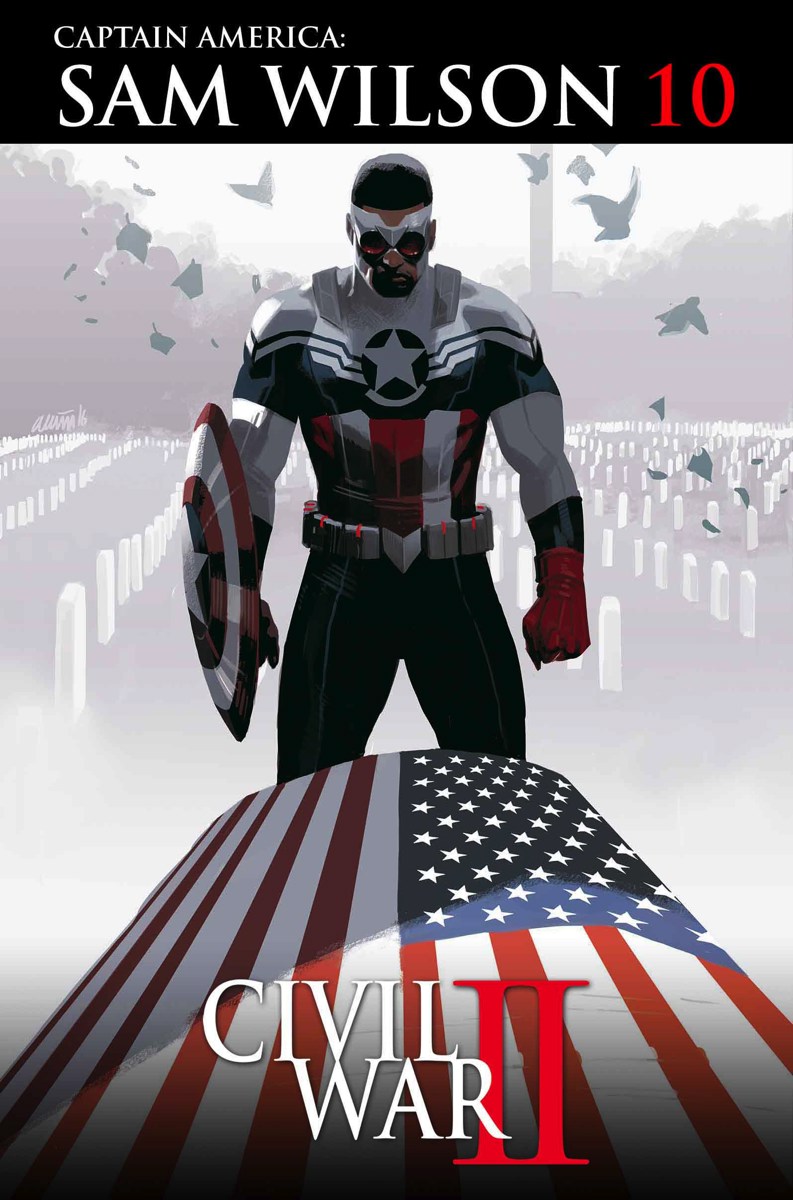 Check out Our Review [WITH SPOILERS] of Sam Wilson: Captain America #10!

Like many issues of writer Nick Spencer’s Captain America, Sam Wilson: Captain America #10 is very, very political. Now, if you’re a left-leaning social democrat like me (annnddd I just lost half of you), you’ll enjoy Spencer’s vilification of the far right. In this issue, Spencer takes a poke at birthers, closet racists, and shines a light on police brutality with a reimagining of an almost forgotten Cap concept– the Americop. It’s all effective political satire through the lens of Captain America history and it’s a load of fun.

If you’re on the left, that is. If you’re comfortably embedded on the right, you’ll just be pissed. While my personal inclination is to agree with Spencer on most of his social critiques, part of me feels bad for the other side. Even if I disagree with your political stance, you have the same right to enjoy superheroes as I do without feeling alienated. I fear Spencer just alienated half his audience (again) and I’m not sure that’s what superhero comics are about.

That being said, if you can enjoy Sam Wilson: Captain America #10 you will enjoy it because it is an action-packed, fully realized bit of business. The issue starts off with the introduction of the Americops and morphs into Marvel’s version of Black Lives Matter and then turns into one of the more effective Civil War II crossovers to date.

In this issue, Sam Wilson earns his uniform by delivering a eulogy to the recently fallen James Rhodes. The main Civil War II book has kind of glossed over War Machine’s passing, but Sam Wilson: Captain America #10 makes a Marvel fan feel the loss more keenly. Even if, like me, you don’t buy for a second that Rhodes is dead permanently, you will still keenly feel the loss of this classic hero.

The book also gives readers a look into the relationship between Marvel’s main heroes of color as Wilson, Photon, Storm, Luke Cage, Black Panther, Doctor Voodoo, Misty Knight, and Nick Fury gather to pay tribute to celebrate the life and process the loss of their brother-in-arms. It is so cool to see this community of heroes together and Spencer gives each one a moment to shine. Heck, Voodoo’s single line made me tear the heck up! When was the last time Doctor Voodoo moved you to tears? The beautifully drawn and somberly colored issue ends with a stirring Cap-worthy speech by Wilson to punctuate a moving and powerful issue of this Cap series.

And now, there is no follow up to the “Hail Hydra” business, but when Steve Rogers does show up at the funeral – it might only be a single panel – it’s really freakin’ ominous so whatever Spencer is doing with the original, it’s working.