WHAT’S SO CIVIL ABOUT WAR ANYWAY?

Squadron Supreme started with the premise that the team, comprised of refugees from destroyed realities, would take extreme action to keep what happened to their homes from happening to anyone else. To that end (SPOILER ALERT), they decapitated Namor.

We had a team of strangers who learned to work together as they took on this difficult mission. Then a funny thing happened – Civil War II.  After eight issues of solid storytelling, Squadron Supreme’s momentum has ground to a snail’s pace as it was shoehorned into Marvel’s latest crossover “event.”

For the first time since I started reading Squadron Supreme, I found myself disappointed with the title. From the cover, which prominently features Spider-Man with the Squadron rendered tiny in the corners, to the final pages which features an appearance from Jim Hammond and his Squadron-Stopper Squad, the Squadron Supreme were like visitors in their own book.

There are simply too many characters doing too many things.

The primary narrative involves the Squadron trying to stop Warrior Woman (evil…remember) from breaking into the Baxter Building to use the time platform to save Namor. That would make for a solid issue of comic storytelling, if it were left on its own. Instead, we get a perfunctory misunderstanding brawl before anyone can reach their objective. The Squadron gets separated – AGAIN – and bad things happen.

I will admit to being curious as to how Robinson and company are going to get our heroes out of the binds they’ve left them in. I’m also curious as to the whereabouts of Nighthawk who has been MIA since he got his butt handed to him by Blue Marvel a couple of issues back.

Squadron Supreme is still a good title, but it needs to be freed from its mandatory Civil War II tie-ins and get back to the business of being its own title. 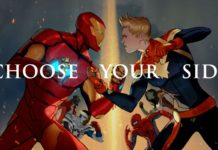