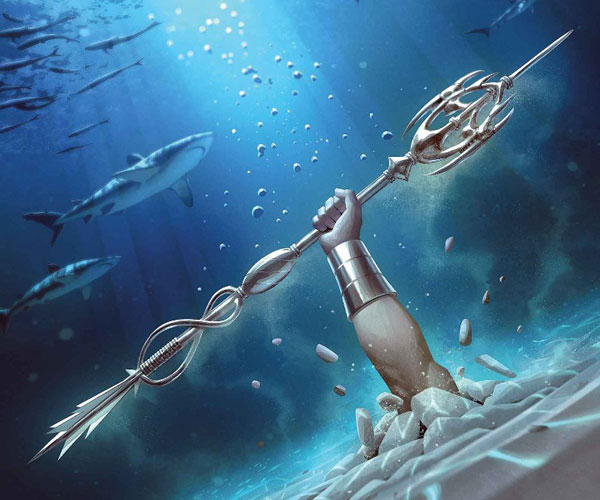 After hitting a series nadir last month, Squadron Supreme returns to form to start its second year. Maybe it’s the fact the storyline isn’t tied to Civil War II this month. Maybe it’s a tightening focus. Either way, the series gets better.

First things first: I didn’t come up with the heading title. No, that is the actual title of the new story arc in Squadron Supreme. Synergy!

Last month I complained about the title’s lack of focus. I’m pleased to say that isn’t a problem this month. In fact, the book focuses on one of its many ongoing plotlines and returns to form.

The storyline in question is the out of phase Hyperion and Doctor Spectrum and their time traveling to the moments leading up to the death of the Sub-Mariner. Now, I don’t think any of us thought that Marvel was going to let one of their oldest characters stay dead for very long. We were right. By issue’s end, Namor is back among the living…sort of.

Spectrum and Hyperion are both struggling with their roles in the destruction of Atlantis and the death of Namor. Watching it play out again before their eyes gives both of them a chance to figure out if the path they took, at Nighthawk’s urging, is one that they are happy with. Some fine writing by James Robinson gives us a deeper look at Hyperion than we’ve had in months. He’s not picking up waitresses at truck stops. No, he’s actually remorseful for his role in the series’ early doings and wants to make amends.

Doctor Spectrum, her powers now more magically attuned, isn’t sure saving Namor is the right thing to do. Neither is she sure its wrong. This moral quandary gives the whole issue a stronger sense of center and a more serious tone. That’s a welcome return to form.

I know Robinson is playing a long game here. I know he got some crossover requirements forced on him. Now, I think, Squadron Supreme is back on firm footing and I’m looking forward to seeing how the new story arc evolves.