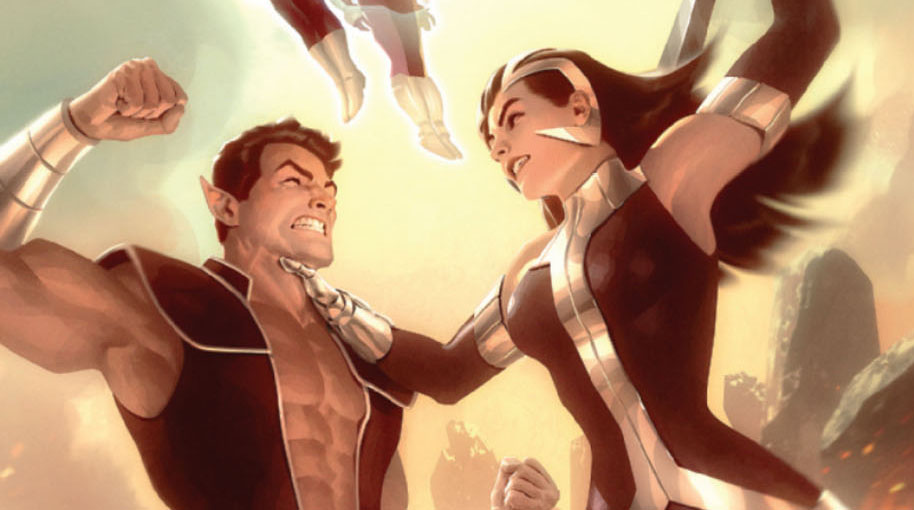 Last month’s issue of Squadron Supreme ended with Hyperion and Doctor Spectrum getting blinked out of existence by Doctor Doom’s time machine. Where does that leave the team? Let’s dive in to Squadron Supreme #12 and find out.

One of the great things about well-crafted team comics is the interaction of the disparate characters as they find their footing on their way to becoming a functional team. There hasn’t been a more disparate team in recent memory than this new iteration of the Squadron Supreme. Five characters brought together from the wreckage of their home worlds with a “by any means necessary attitude” sounds like gold, and it was – at first.

Then, for some reason, the creative team decided to send the team out on multiple missions and the title started to wobble. The mission got muddled and the title wobbled more. Now, twelve issues in and we’ve hit a wall.

NEITHER SQUADRON NOR SUPREME

Squadron Supreme no longer reads like a team book. With so many characters doing so many different things, the most recent issue of the title reminds me, for better or worse, of Marvel Comics Presents. What we’ve got is a series of small stories moving in even smaller steps. It has ground the title’s momentum down to nothing.

Hyperion and Doctor Spectrum are phantoms, observing from outside of time. The Power Princesses continue to battle. Thundra and the Whizzer are facing off with Spider-Man, Jim Hammond and SHIELD. Nighthawk appears in ONE PANEL.

The issue ends with the return (sorta) of Namor. The story seems to be building toward a resurrection of the Sub-Mariner, and Namor is going to be really unhappy with the Squadron if this happens.

Up until now, I’ve really enjoyed Squadron Supreme and I gave it some leeway because of the team they were trying to build and the story they were telling. I’m not giving them that leeway this month. It’s time to focus on the team and their story – together.