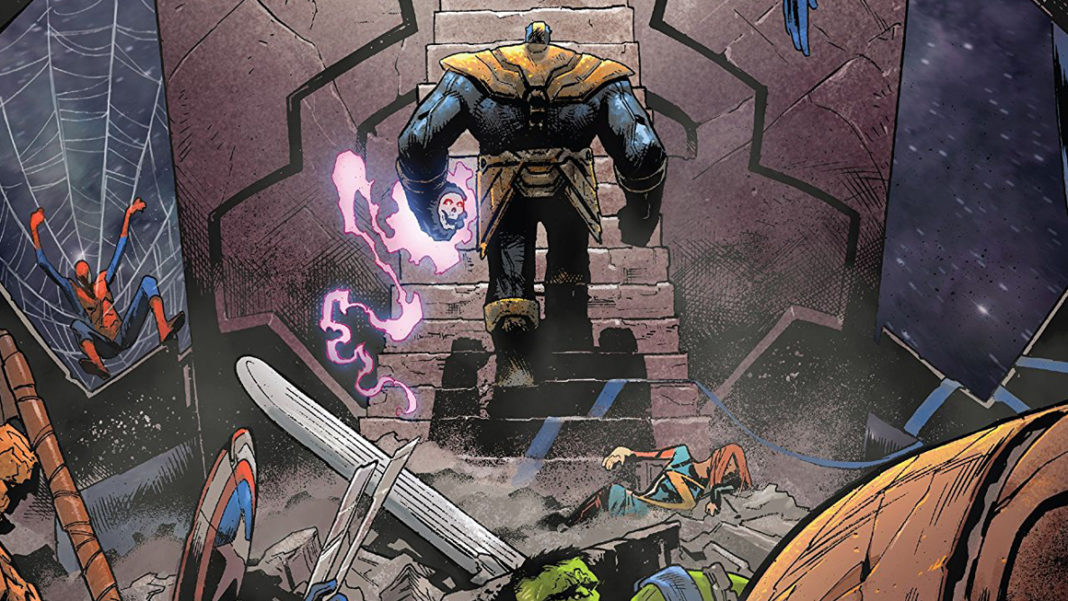 The end has come. The Marvel Universe has been torn asunder and Thanos reigns supreme on top the rubble! Old but still strong, Thanos is so close to finally achieving his goal, but there’s one final challenge. To overcome it, Thanos will have to team up with an unlikely ally: himself!

The Thanos Wins story arc seems pretty straight forward at first, but let me tell you, it’s anything but. Throughout this six-issue story, Donny Cates excels at showing just who Thanos is at his core while crafting this haunting but gloriously dark future for the Marvel Universe. This bleak, desolate world is heightened thanks to the detailed art of Geoff Shaw!

Cates uses Thanos’ history and experiences to show the reader how it influenced his current and future self. And yes, he certainly highlighted the Titan’s legendary brutality.

There were so many awesome moments in this arc that I’m actually not sure which one was my favorite. To name a few, there’s Thanos’ Chitauri conquest, the Silver Surfer wielding Mjölnir, Lady Death’s appearance, and the final confrontation. And all of this was boosted by strong and memorable dialogue throughout.

At his core, Thanos is someone who is willing to do whatever it takes to reach his goals.  Thanos is willing to cut down all who stand in the way of his goals, which is no surprise; however, dear readers, even you will be shocked when it comes to his final kill.

This story is also the first appearance of the new Cosmic Ghost Rider! At first, his character comes off as just simple comic relief, but when you realize who he is, you forigve his earlier behavior.

I was pretty surprised that the Punisher of all people was actually this wise-cracking hellspawn! The story of how he became the rider, then Galactus’ herald, and then Thanos’ right hand man is very interesting. It’s crazy, but it plays off the insanity of the future Thanos created. Fortunately, if you liked this character, there is more to come — fans liked him so much that Marvel’s giving him a five-issue miniseries!

Overall, Thanos Wins is a look into Thanos’ very being, and it doesn’t hold back. It has an appropriate dark tone, great dialogue, great artwork, and twists that you don’t see coming. If you’re looking to scratch that Thanos itch, I recommend giving this a read.