Home COMICS The 8 Winners of the 2016 Superhero Olympics! 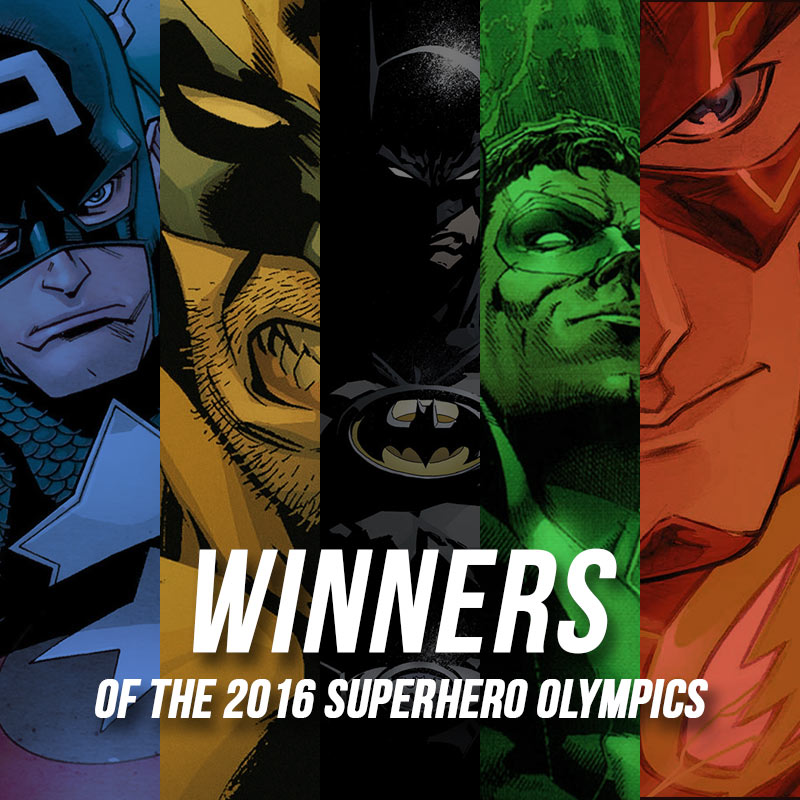 Wait. There was a Superhero Olympics? Yes, there was a Superhero Olympics and you missed it. Why? Because it (sort of) went the route of Marvel’s Secret Wars; a “divine” being upended all the superheroes (and villains) from multiple comic book universes, slapped them onto a formerly inhospitable world and let the super-humans behave like, well, easily agitated super-humans. And when all was said and done, (mostly) everyone returned home, and barely anyone remembered it (save those who returned with a new costume slowly dissolving the soul of said costume wearer).

Anyway, yes, superheroes were involved with Olympic-style games at the behest of 3 drunk Beyonders, 2 Monitors and the freaking Molecule Man who, incidentally, went for the soft pretzels but decided on moose tracks ice cream instead (both of which he created from the ether).

What were the events? Who in the hell actually won? And more importantly, where can you buy the t-shirt?? I have hilarious, pretend answers for the first 2 questions, and helpful links for the third.

Doctor Doom just…dominated; there was no competing with his incessant bragging regarding his abilities, his several hundred master plans and Machiavellian machinations currently in rotation, and his well-deserved position as king of Latveria. The man/wizard/machine just…just…he’s still going, actually. Currently, he’s in the midst of his 24th Reed Richards rant, and according to my watch, he’s just getting started; at 72 hours in, he only used the word “infernal” 623 times.

Wait, what’s Galactic Repositioning? Why, that’s repositioning planets and other heavenly bodies tethered by gravity and stationed in dependable orbits. Yep, you have to move planets to designated points according to a designated star-map. And yes, the galaxy chosen is completely devoid of discernible life.

So….Superman was doing fine, until it became abundantly clear the sun was comparable to egg salad. We…uh…we’re confident he’ll turn up soon.

The Hulk was certainly motivated, but had trouble traversing the space between planets. He’s a formidable leaper, but can’t jump high enough, or hard enough, to achieve escape velocity. He’s out there, somewhere, and we’re quite sure if we leave him alone, he won’t return with an armada of aliens like that best-forgotten “Planet Hulk” ordeal.  Well, we’re pretty sure. Wait. Wormholes.

Yeah, Galactus kind of won by default, even though he took “repositioning” to mean “near-infinite snack tray.”

Yeah, he just kind of….took over.

Wait, how did Batman defeat a highly trained super-solider with the capacity to mash Iron Man’s helmet – which can survive atmospheric reentry, by the way – until it closely resembles a cantaloupe after being trampled underfoot by raging, extraordinarily aggressive (and uncharacteristically speedy) Hippopotamuses? He’s Batman, and ever since the “Amalgam Incident,” he’s been training extensively and specifically to defeat a certain doe-eyed, weaponized patriot.

Basically, he used all that vita-ray-infused power and momentum against the good captain, and…he’s Batman. Honestly, I choose anyone over him in any kind of competition regarding anything, and 50,000 Batman fans will probably torch my car and take one of my nipples as a souvenir. And that’s not an insult; I’m extolling your fervent, somewhat unnerving passion for the character.

Look, The Thing was turned into a monster, and trapped in a body feared and ridiculed by the general populace (especially the Yancy street gang). Later, he lost his girlfriend to the g-darn Human Torch. I mean, let’s face it; the guy really suffered.

Matt Mudrock lost his vision due to that mysterious chemical compound, lost his father because he refused to throw a fight, and never knew his mother until later. Much later. So, who cared for him in the interim? That would be a roving hard-ass by the name of Scott Glenn…er, Stick. Sure, he showed Matt how to rein in his initially torturous abilities, but that was as far as the relationship went. What I’m saying is, Stick wasn’t keen on warmth, and refrained from dispensing the barest modicum of fatherly understanding.

But…Batman. I mean, yes, we’ve seen the Waynes die a hundred times over a hundred forms of media, but we shouldn’t let our collective desensitization blind us to the overwhelming tragedy.  A boy witnessed the brutal murder of his parents, and it was akin to a splendorous, Gothic ballet including tumbling pearls grazed by moonlight, and pools of blood reflecting the flickering cadence of a disaffected cityscape. It was a tragedy for the ages, and it was equal parts horror, and melodramatic, operatic splendor; a bloody, rain-slick birthing ground for the world’s most iconic avatar of unwavering, fastidious justice!

Tasked with leaping across the cityscape to arrive at some arbitrarily chosen, glitter-slathered skyscraper with a dangling banner stating, “FINISHED,” our heroes fared thusly:

So, Batroc can leap, but only so far. We think they’re scooping his body up somewhere between the Baxter Building and Willie Lumpkin’s studio apartment.

Nigtwing is one hell of an acrobat, and he handles that grappling gun very, very well. But, he’s only human, and has to land every now and again in order to…uh…re-grapple something.

Spider-Man moves around the city effortlessly; it’s as close to flying as one can get without technically having that particular super-ability. Yes, he won, and basically back-flipped the last 5 miles off the wings of a surprisingly tolerant murder of crows.

Whose time-traveling escapades truly impressed the judges? That would be the time-hopping shenanigans of Batman. But they weren’t shenanigans at all. No, sir.

When Darkseid projected Batman backwards through time with his trusty, apparently time-displacing Omega Beams, Batman didn’t have the advantage of a handy device to return him to the present, nor was he capable of reaching the correct vibrational frequency through the application of self-generated, post-light speeds.

Nope, all Batman could do…was fight his way back; through the centuries and identities of his ancestors, Batman fought his way “upwards” through time. And when he finally arrived in the present, Batman learned the “Omega Effect,” responsible for his reprehensible displacement, was amassing volatile energies throughout time, becoming more powerful as Batman ascended towards the present. Therefore, when Batman returned, it was as a glorified, bat-eared ‘today-bomb.’ Well, he figured out how to diffuse himself, so….Yeah, Batman.

And then, just like that, the contest was over. The heroes returned to their respective realms, and the cosmic beings who initiated such a strange and arbitrary contest regaled each other with tales of the eight, incredibly entertaining events over soft pretzels and moose tracks ice cream. Why? Why such a gathering through the forced retrieval of beloved (and “be-loathed”) characters from the far corners of a gracefully collaborative Multiverse? Well…why the hell not?