Spider-Man, Spider-Man…does whatever spider can! Spider-Man is one of the most easily recognized characters in the world and is quintessentially the flagship character for Marvel Comics. Unfortunately for them, his film rights currently belong to Sony(as of this writing). Who is this amazing character and who are his friends and enemies? No, put down that can of Raid! I don’t think that would really work anyways.

Forged in 1962, Spider-Man was the brainchild of the famous Stan Lee. After observing a spider and reflecting on the pulp hero (brace yourself for this one) the Spider, Stan Lee pitched his idea to fellow titan of the comic book industry Jack Kirby. Unfortunately for Jack, Stan Lee did not approve of Kirby’s version of the nascent 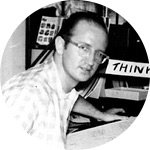 hero and thought it looked like ‘Captain America with Web Shooters’. I suppose it could have been worse/better had he drawn Spider-Man like a New God! Stan then contacted Steve Ditko (on the left!) who created many of the iconic elements of our favored wallcrawler.

One of the major deviations of Spider-Man from the rest of comic book world was he was the first comic book character that people and readers could truly relate to. At that point, people projected their feelings and emotions onto the sidekicks of their favorite characters. Here we had a teenage boy that was suddenly given tremendous power and skill. First appearing in an issue of Amazing Fantasy #15, Spider-Man quickly became a pop-cultural cornerstone.

Orphaned at a young age, Peter Benjamin Parker was socially awkward yet brilliant and living with his Uncle Ben and Aunt May. Bitten by a radioactive arachnid, Peter began to manifest strange and oddly spider-themed powers like the ability to stick to walls, preemptively sense danger, increased strength and speed, and the overwhelming need to catch insects and liquify their insides. Oh wait, that last bit was wrong. You can see how I became confused, right?

However, being a teenager gave Peter Parker a slightly different outlook on his powers then some of his contemporary compatriots. Heroes of that time were larger than life with no flaws what-so-ever. Peter though decided to use his powers to enter a win a wrestling match because who wouldn’t go drunk with power? You may be familiar with this scene staring the late Macho Man. Collecting his earnings, Peter then left to return home and let a passing burglar escape authorities paying it little mind. Unfortunately for him, that very same 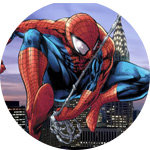 burglar ended up killing his Uncle Ben and instilling in Peter the prolific words that always accompany him…’With Great Power Comes Great Responsibility’. Interesting factoid about that; that phrase was only later attributed to Uncle Ben and appeared much later within the comic book continuity. Learn something everyday!

Now fully engaged in the Spider-Man persona and also having to help support Aunt May, Peter Parker started his superhero career in earnest. Focusing on low level street crime at first, his trademark sarcasm and tendency to be in the wrong place at the right time quickly earned Spider-Man several super-powered villains and long lasting animosity from the likes of Green Goblin, Electro, Vulture, Doctor Octopus, and the Jackel though his bubbling personality and compassion garnered him quite the list of loyal allies such as Iron Man, the Fantastic Four, and Deadpool(sorta).

Gaining a job at the Daily Bugle under the strict anti-Spiderman rhetoric of J.J. Jameson and enrolling at Empire State University, Peter Parker still struggled to balance his personal life with his super heroic career. Constantly interfering with each other, these two aspects of Peter’s life came to a tipping point when the Green Goblin kidnapped Gwen Stacy(his current girlfriend) and caused Peter to accidentally kill her via a botched rescue attempt and the whiplash effect. This caused a rippling effect throughout Spider-Man’s life and his constant guilt effects many of his decisions.

Sometime later Peter began dating/seeing/hanging out with Mary Jane Watson, an aspiring actor and firebrand though Peter’s personal life was still far from simple. Remember the flirtatious Felecia Hardy or the shy Debra Whitman? Exactly! Speaking of complications, what if you had a clone of you running around that didn’t know he was a clone? Only Peter Parker and Arnold Schwarzenegger knows what that is like. Later known as Ben Reilly, the Clone Saga was a highly controversial story arc that polarized many fans.

Luckily for us, the next major story arc involving Spider-Man was ‘Secret Wars’ where Peter’s suit was damaged and was luckily presented with a ‘costume machine’ which gifted Peter a new black and white suit that seemed to augment and enhance his already potent senses. Finding himself more aggressive, Peter learned that the costume machine actually grafted an alien symbiote on him which formed a very strong psychological attachment to Spider-Man and deems itself Venom(which later spawns Carnage).

The next step in Peter’s life was his wedding to Mary Jane, which was actually the second time Peter asked her to marry him. However, in a controversial move, a Lord of Hell Mephisto makes a Faustian bargain with Peter which causes the 30 years of comic lore to become somewhat…spotty. Hey, I said controversial right?

Spider-Man wasn’t always Peter Parker…most recently, Doctor Octopus was able to swap bodies and became ‘the Superior Spider-Man’. At first, Doc Ock was simply going to wreak havoc on Peter’s life but being inside Spider-Man made Doc Ock realize how pointless and empty his own life had been. Rededicating himself to fight crime, Doc Ock upgraded the Spidey costume with a few improvements of his own such as additional limbs and remote controlled drones. Don’t worry though, Peter Parker is back to being Spider-Man!

Green Goblin: Norman/ Harry Osborn have been a constant throne in the side of Peter Parker and play on the duality of Spider-Man’s life. Harry is Peter’s best friend, but Harry hates Spider-Man! Equipped with gliders, explosives, and corrupted super soldier serum, the Green Goblin is one of the most enduring foes of Spider-Man.

Doctor Octopus: Dr. Otto Octavius was a brilliant, yet obsessed scientist before a lab experiment left him crazy and…um…even more obsessed! Augmented with semi-sentient tentacles and an advanced scientific knowledge, Doc Ock even manged to steal Spider-Man’s body recently…though the he developed a heart and felt bad for all of his years of villainy. Isn’t that what happened to the Grinch? 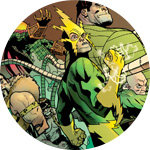 Vulture: The original Vulture was Adrian Toomes, a former electrical engineer that was left penniless after a bad business venture and turned to his anti-gravity flight suit to commit crimes and burglary.

Venom: An alien symbiote that enhances and feeds off the aggression of its host. Originally a bad guy, Venom has moved more or less towards an anti-hero role and tends to stay out of the affairs of Spider-Man.

Carnage: The psychotic alien progeny of Venom, Carnage was bound to Cletus Kassady who embarked in a city wide murder spree.

Kraven the Hunter: An obsessed big-game hunter who decided Spider-Man was the ultimate prey.

Chameleon: The half brother to Kraven, the Chameleon is able to appear as anybody and uses technology to confuse and bewilder foes.

Rhino: Aleksei Sytsevich was a former Eastern Bloc thug and was bombarded with chemicals and gamma radiation granting him increased strength and durability.

Mysterio: A master illusionist and special effects guru, Quentin Beck used his skills to manipulate and steal his way to power.

Electro: Max Dillon was working on a power-line when a freak lightning strike granted him Omega-Level(molecular) control over the element of electricity.

Sandman: Born William Baker, the person who would later became the Sandman led a bitter life of low level crime until he was exposed to irradiated sand which granted him fantastic shape-shifting properties.

Spider-Sense: the ability to sense danger and what direction it is coming from. 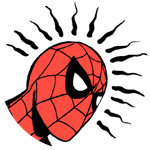 Super Strength: Spider-Man is easily able to lift 10 tons above his head with minimal effort.

Speed, Agility, Reflexes: Relying on his Spider-Sense gives Peter Parker incredible reaction times to danger and is quickly able to analyze situations faster than a normal human being.

Regeneration: Though not nearly the strongest healing factor in Marvel Comics, Spider-Man possess some degree of regeneration in the way that his normal wounds heal immensely fast. He won’t regrow limbs but that broken bone will mend quickly!

Wall-Crawling: Spider-Man possesses the ability to cling to almost any surfaces due to micro-hairs all of his body.

Webbing: Originally a piece of technology and later grown organically, Spider-Man’s webbing is immensely durable and provides a multitude of tools and abilities.

Constitution: Peter Parker’s spider regeneration provides him with an incredible amount of stamina and a greatly enhanced metabolism that quickly processes poisons and lactic acid build-up in the muscles.

Intelligence: Even without the spider-given powers, Peter Parker was one of the smartest people in the Marvel Universe.