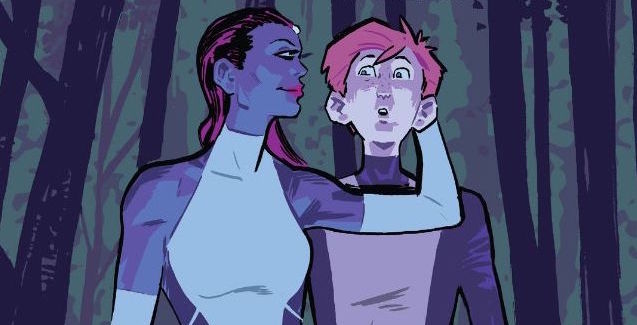 Fortunately for fans of the X-Men and comics in general, this week was graced by many fantastic comics, including the second issue in the mini-series, X-Men: Worst X-Man Ever. The series had a strong start last month with a short but lovable story, capturing the essence of the childhood dream to be a hero. Now, as an almost established member of the X-Men, our hero, Bailey Hoskins, must master his surroundings and find his place in the halls of a mansion filled with legendary mutants and those training to be. With that in mind, we bought the book and sat down to find out what was next for our friend, Bailey, with the purpose of divulging all our thoughts on Max Bemis’ Worst X-Man Ever #2.

The following issue picks up where the first left off with Bailey ignoring Forge’s warning to stay where he will be safe from intruders. His eyes and motivations set to kick some butt, Bailey throws on his new super-suit and sets off to fight among his idols. In his efforts, Bailey casually walks throughout the house and grounds of the school, looking for an invader to bash. Finally, Bailey finds the figure who will kick-start his history of heroism. With a cry for battle, Bailey flies in, but in true Worst X-Man Ever fashion nothing goes as planned. His victim begins to whimper and cry, begging Bailey to leave him alone. Soon after, the reader sees Bailey in a meeting with Jennifer Walters, a lawyer also known as She-Hulk, trying to settle the lawsuit against Bailey for an “unabashed emotional assault.”

Sadly, it’s all downhill from there as the weight of the world falls upon Hoskins’ shoulders. To save him from his funk, Bailey tries to find a mentor willing to give him an inspiring speech either from a sports film or a team of X-Men willing to include him on their adventures. But of course, nothing works; Bailey falls further into the depths of devastating depression. His only saving grace manifests itself in the shape-shifter seen on the cover, the malevolent Mystique, who tempts him into leaving the X-Losers for the Brotherhood of Mutants. Following this meeting, Bailey is perplexed, wondering what he should do and ponders Shakespeare’s word: is it better to be vile or vile esteemed?

As I was reading, I found myself wondering the same thing, completely immersed in Bailey’s story. Max Bemis, the singer of Say Anything, seamlessly weaves together this series of rather unfortunate events in a humorous and intriguing way. At first, Bailey seemed to capture the childhood dream we all had of being a hero. Presently he represents, at least in the second comic, the epitome of a loser – even more so than the early days of Peter Parker – just trying to find his place in the world. In a small way, Bailey is going through typical stages of growing up in a grandiose, comic-book format, and we, the readers, are right there with him; we’re reminded of our own lives, and thankful we are not him. In light of this, I can hardly contain my own excitement for the release of another hilarious installment of Bemis’ mini-series, X-Men: Worst X-Man Ever.