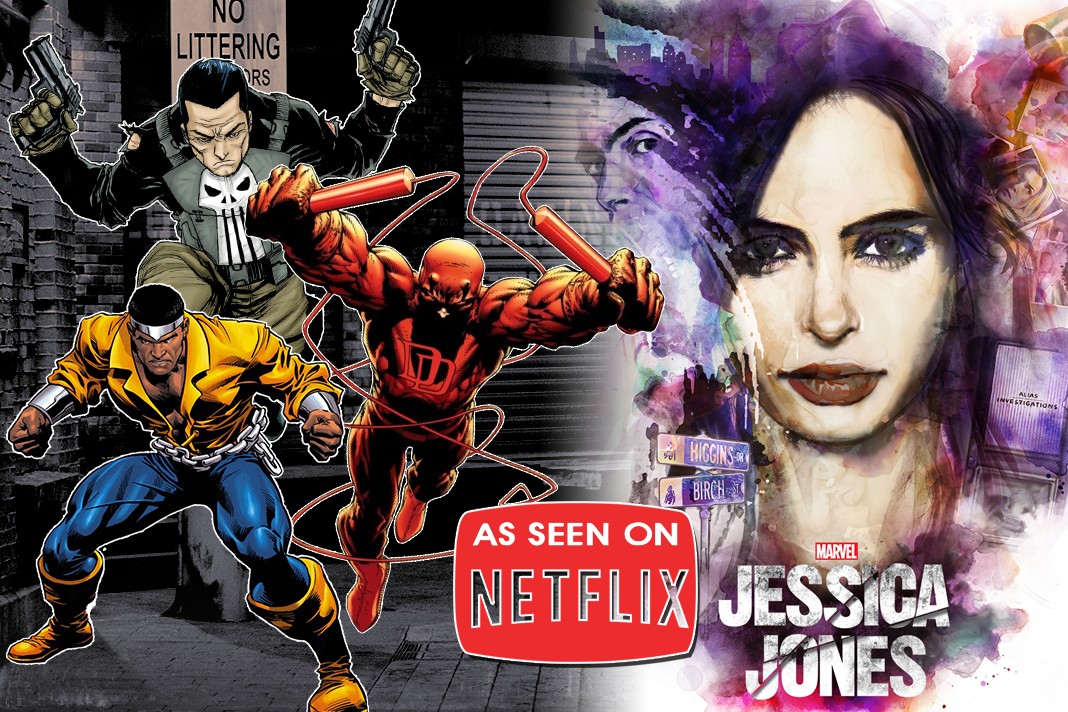 Jessica Jones is here! The newest Marvel series recently debuted on Netflix and we here at The Source are ridiculously excited, elated, thrilled, happy, excited, thrilled and happy! Also, we’re extremely excited and happily thrilled! Why? Because this is a Marvel series created through Netflix original programming, and we know just how well that collaboration translates. I mean, you’ve seen Daredevil, right? It was dark, brilliant, bristling and unbelievably honest. In summation, this was Daredevil brought to life passionately and accurately. But I digress. Anyway, a teeny-tiny caveat: we have no Jessica Jones-specific items to show you….yet. BUT, we do have product for other Marvel characters who are either Netflix alumni, or future Netflix stars! SO…let’s gear up for Jessica Jones with product based on other Marvel characters set to make (or already making) their debut on Netflix!

Luke Cage is a bad mo-fo with his own Netflix series debuting in April 2016. He’s also a prominent character in Marvel’s Jessica Jones. Luke Cage is wrongly accused and exceptionally invulnerable, so those responsible for said wronging will probably be sucking brick wall in the very near future. Luke Cage is a man in chains; he’s restrained by society, the onset of volatile, experimentally derived powers, and by his conscience. However, Luke Cage is a man who will never accept the finality of his bindings.

The Luke Cage Hero for Hire 30 Single T-Shirt is a softer t-shirt colored in a muted yellow, showing the enraged determination of a man set to break free of restraints both external and internal.

The Luke Cage Blue Pint Glass is the perfect novelty when imbibing massive amounts of Red Bull or Monster in order to duplicate the spectacular rage displayed on the glass’ classic illustration. But seriously, stay away from those energy drinks. They remove paint from a jet’s fuselage, or something.

Daredevil Season 1 debuted on April 10th, 2015, and took the world by storm. However, viewers were unsure, uncertain, and a little frightened regarding Daredevil’s premiere. The 2003 movie starring Ben Affleck opened to mixed results – mostly negative – and no one really had any idea if Netflix could properly translate a lesser known character immersed in conflicts ranging from morality, religion, and the pursuit of altruism through means deemed unacceptable by those trained to represent legality. BUT…our fears were proven insubstantial, as Daredevil kicked 36 types of @$$. Honestly, it was a ballet, a ballet of action, plot and thorough, dense character development. It wiped the floor with our uncertainty and we wiped the blood off our faces with a brilliant grin.

Ready for season 2? Good, so are we. Let’s celebrate Daredevil’s return with the Daredevil Target T-Shirt. It’s classic DD, right? Yeah, he’s certainly in the sights of highly trained marksman, but you know he’ll hear the impending direction of each and every round and twist and twirl between each and every one.

Yes, we know…the Daredevil Mr. Potato Head seems a little uncharacteristic. It just doesn’t quite fit the tone of the Netflix television series, and certainly not the comic book. Look, let’s just pretend we remember what joy felt like and prop this smiling, horn-headed, potato-based caricature on our dashboard and sing a happy song. Maybe. It’s an alien feeling, this joy, but with a little practice we may successfully strengthen our severely atrophied happy muscle.

Daredevil returns to Netflix when Season 2 premieres in April of 2016, marking the debut of Punisher…Mark IV? Let’s see, we had Dolph Lundgren, Thomas Jane, Ray Stevenson and now The Walking Dead’s John Bernthal. We here at The Source have a feeling that this particular incarnation may finally be accurate. I mean, it’s not that hard, right? The Punisher, a highly trained veteran, loses his family during a mobster-fueled cross fire and seeks vengeance on those who instigated said crossfire. Oh, I should also mention his quest to avenge his loved ones never seems to end. In fact, it extends to all those who express the same violent, aggressive, murderous behavioral patterns. Translation: The Punisher’s chosen vocation will never face budget constraints, material deficiencies or unexpected downsizing.

Ready for the real Punisher to finally hit the screen? Yes? Good, then let’s celebrate with the Punisher White Skull T-Shirt! This Punisher t-shirt displays the familiar symbol adorned by Marvel’s hard hitting angel of death; this is usually the very last thing an especially violent malcontent sees before a lethal curb-stomping.

The Punisher Symbol Pint Glass is perfect for…uh…catching streams of blood before they pour onto the street? Storing 30-75 shotgun rounds? Hmmm. Maybe it’s just for Frank Castle’s nightly glass of warm milk after an extremely hard day of punishing. Maybe.

The Punisher Symbol Black New Era Beanie is a black, comfortable, head-warming beanie featuring…yes, the highly recognizable Punisher symbol. Frank Castle has fully committed himself to punishing, regardless of the weather’s severity. Think your murderous spree will be overlooked because of the 3 feet of snow effectively debilitating law enforcement response time? Sure, there’s some validity to this thinking, but there are others walking about in the cold, winter night; individuals with sniper rifles, hand grenades and spiked brass knuckles. Yeah, you’re seriously, seriously screwed.

Ready for Jessica Jones? Pleased with the handling of Marvel characters through Netflix’s original programming? YES? Then let’s celebrate!