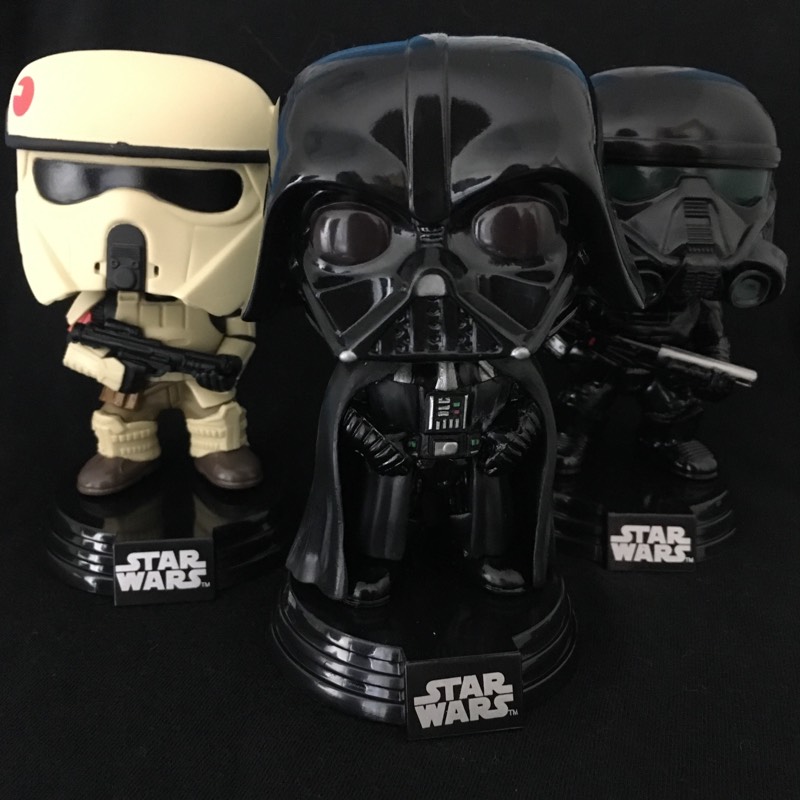 We’re making a play to ascertain complete and total victory over that ineffectually boisterous Rebellion with a giant, almost planet-sized super-weapon sporting a ridiculously extended super-canon! How dare they try to assert control and abscond with the telling schematics of our mighty spheroidal deterrent! The Empire is RIGHT! The Empire is JUST! And the Empire will crush this band of entitled peasants with our invincible weapons and unstoppable Stormtrooper brigades!

And….for a very modest price, you can support the Empire’s forward motion by purchasing one of our Rogue One POP vinyl figures representing the finest soldiers the Empire has to offer. OBSERVE!

At 4″ tall, this compacted caricature celebrates the legendary right hand of the Empire, the Sith Lord with enough Force-control to properly mangle an AT-AT, Darth Vader! Bask in his greatness! Bend to his every whim! Place him on your dashboard and confess your rebellious thoughts to the nearly mythical centurion representing the Empire’s strength, determination, sacrifice, and a reliance on cybernetics to speak with a terrifying, robotic tone.

Look, this 4″ representation of the especially destructive phalanx of Stormtroopers looks, well, adorable in this particular iteration, but don’t let that fool you. One of these life-sized cats will kill you, your pets, your village, your township, your sewage system and any and all comic books you dutifully collect. Verily, a squad of Death Troopers will snuff you out emphatically and completely. Just….just go with them and maybe we’ll see the sun tomorrow.

They’re specifically bred, trained and armored for more tropical climates, which comes in handy when you’re dropping troops off at a tropical planet called Scarif. And yes, there’s never any confusion as to which tropical planet, considering the name of their destination is found in their designation. Clever, and efficient.

Unfortunately, Stormtroopers specifically bred for conflict upon worlds brimming with feces are not fond of their particular branding. The Poop-Trooper just doesn’t invoke any real sense of terror or foreboding.