Home GEAR SHOW YOUR SUPPORT! Wear the T-Shirt and Write in Batman for President! 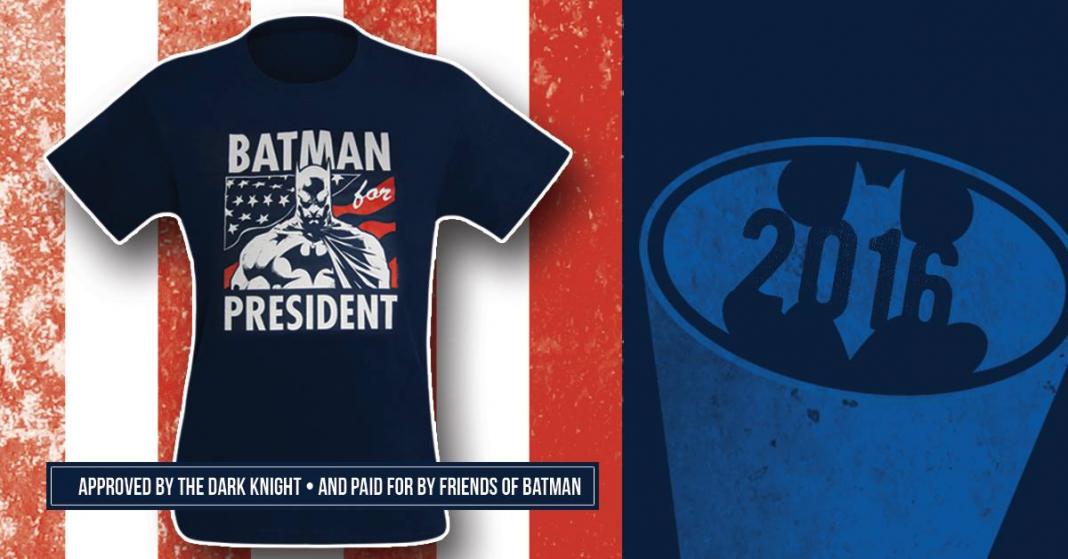 Look, if you haven’t done so already, it’s super-important that you get out there and vote. And no, I’m not beseeching you to “vote your conscience” when the moderately unsettling choices are a highly questionable Hillary Clinton and the brutally inappropriate, egomaniacal Donald Trump. I’m galvanizing you to visit any one of the multitudinous voting shacks currently in operation, and write in the candidate that will drag America — kicking and screaming — back to greatness, or scare the lot of us until we voluntarily make an effort to get our collective sh*t together. That’s right, I’m telling you to write in Batman for President.

Why Should You Vote for Batman?

1. Because signing up with Batman gets you this cool-@$$ Batman for President T-Shirt. OBSERVE!

Wrap yourself in this 100% cotton, navy blue t-shirt and decry the inequities of two-party politics that have done very little to assuage the swelling tax burdens shouldered by a dissipating, financially anemic middle class! GRRR!!

2. Because Batman isn’t beholden to special interest groups or super-pacs funded by multinational corporations who will demand discretion while they extort the American economy!

Batman, for some reason, seems to have an unlimited flow of Bat-cash at his disposal, so he funds his own campaign, and is therefore free of unsavory financial influence. And if he does have to strike some sort of inappropriate deal, it’s probably a ruse and will eventually lead to consecutive life sentences served by carelessly greedy corporate officers dealing in maliciously inflated stock values. Yup.

If any terror cell is foolish enough to achieve a state of full ‘radicalization’ during Batman’s…uh….reign, they’re going to be sent home in canvas sacks sporting 30-45 broken bones, and layered in concentric patterns of bat-shaped burns. Oh, and their success rate will retain a resounding 0% because Batman will methodically divine any and all devastating attacks on American soil at least 30 days before the first dirty bomb is smuggled into a flower shop.

4. Because any foreign powers participating in crimes against humanity will receive a visit from the Justice League.

Within 7 minutes, the responsible government, its economy and military infrastructure will be handily seized, and whenever necessary, reduced to sun-charred gravy as Superman lances enemy tanks battalions with heat vision from just above the Earth’s atmosphere. And yes, during this more aggressive mitigation of dependable military responsiveness, Flash will move endangered citizens to a predetermined safe zone located 1,000 miles from the capital.

5. Because he’s very, very smart, and knows how to turn America back into a producing economy.

Rumor has it he’s experienced in running several successful multinational corporations, most of which deal with the designing, manufacturing, and distributing of cutting-edge technology. Heck, he just approved the construction of 536 Brother Eye communication satellites, so you know he’s business savvy.

6. Because Batman will deliver a crime-free America. No innocents will ever come to harm while residing in the always dark, aesthetically Gothic, United States of Batman!

He’s pretty obsessive about it. Sources close to Batman have apparently overheard him delivering, somewhat neurotically, the following litany: “No one will suffer as I have suffered.” And, these same sources refer to his uncontrollable shaking while tediously repeating said litany. This might be…concerning.