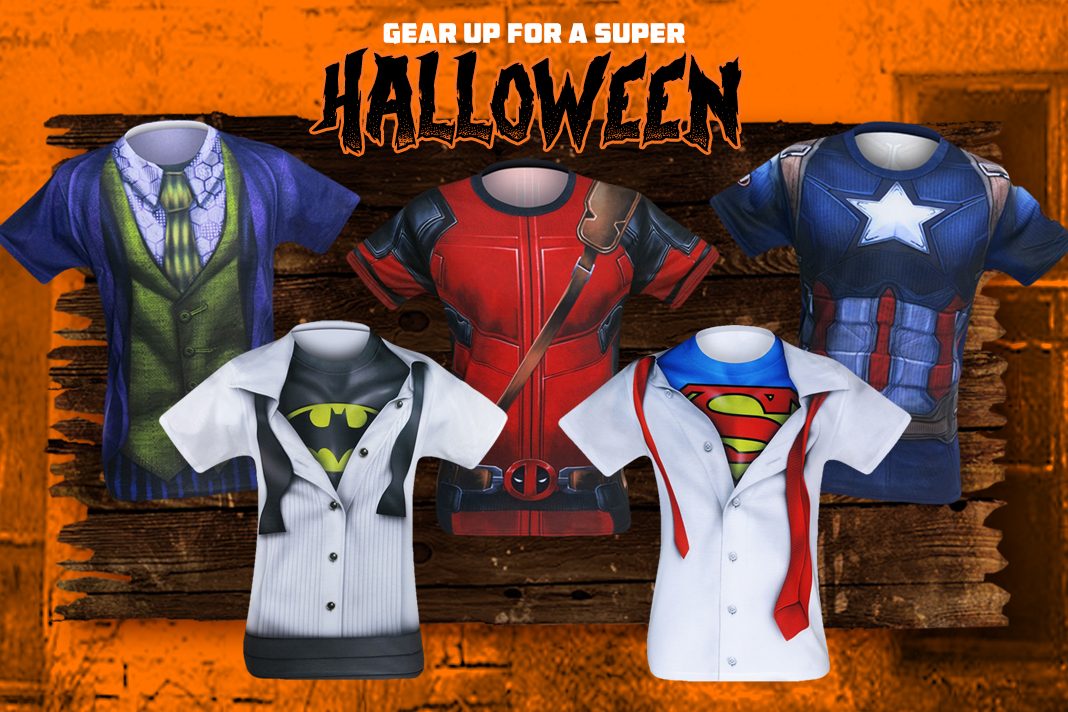 It’s (almost) Halloween! It’s time to dress like your favorite superhero or supervillain–at least from the waist up–with one of our many, elaborately printed and constructed superhero costume t-shirts! Wearing one of these gives you permission to act like an extravagant ass with a heart of gold, or a completely fractured psychopath who adorns himself in masks made from the carefully skinned faces of unsuspecting victims! Okay, we ask that you refrain from expressing the previously mentioned behaviors physically, but we do condone behaving that way IN YOUR MIND while donning any or all of our top 10 superhero costume t-shirts! Yep, here are the best of the best in no particular order. Basically, we’re counting down from “awesome” to “awesome.”

First, I’m going try try them on–each and EVERY ONE–in the video below. Then, scroll down for more elaborate descriptions and clickable images. 1…2…3…GO!

Made from 100% polyester, this sublimated t-shirt properly conveys the printed appearance of Joker’s more formal murder-wear, including a purple coat, green vest and tie, and purple patterned button-down shirt. It’s what one wears while introducing oneself to gangsters and obstructing a henchman’s eyesight with a collection of rusty straight-razors.

Made from 100% polyester and 50,000% good intentions, this t-shirt features a beautiful sublimated print reflective of the Superman costume residing just underneath your button-down shirt. Because when sh*t goes sideways at the office, you’re the guy that jumps in and replaces the paper towels, cleans up the coffee station, and empties out the lunchroom refrigerator after one of the sandwiches grows eyes and demands inalienable rights.

Made from 100% freedom (polyester), this costume t-shirt features the detailed, sublimated print reflective of Captain America’s uniform circa Captain America: Civil War. Yeah, the uniform he wore while body-slamming Tony after a timely distraction enacted by an armless Winter Soldier.

Made from 100% brutal determination (polyester), this costume t-shirt features a fine, sublimated print simulating Batman’s costume just underneath his partially unbuttoned tuxedo. Because when you’re in the midst of a g-darn gala and the Joker drops a headless corpse into the punch bowl, it’s time to lose the delicately threaded veneer of extravagant civility and beat the ACE chemicals out of that pasty son of a b*tch!

Made from 92% polyester and 8% spandex, this sublimated, simulated Spider-Man costume features the classic web pattern, the big, black spider, and….probably a few wet spots due to a persistent gushing of tears. Yep, Spider-Man goes through deep, personal sh*t on an hourly basis.

Made from a dense vibranium weave (100% polyester), this very vibranium-less costume t-shirt features the printed, sublimated appearance of the Black Panther’s sacred and royal, warrior-garb! The King of Wakanda, you see, is also the leader of a timeless warrior-cult empowered by a mystical root and trained since birth to be supremely brilliant and subtly destructive. A Black Panther is an unstoppable warrior blessed by ancient ways and augmented by bleeding edge technology. He’s…formidable.

Made from 92% polyester and 8% spandex, this Daredevil costume t-shirt features a sublimated print cleverly reproducing Daredevil’s signature costume! Yep, this is very similar to what Matt Murdock wears immediately after the courts fail to properly punish a wrongly emancipated perp. When the person wearing THIS appears on the fire escape outside your window, it’s best to accept your guilt before he mashes your skull like a rotting squash.

Made from 92% polyester, 8% spandex and 3,000% Dark Side of the Force, this ornately printed, sublimated t-shirt reproduces the appearance of Darth Vader’s uniform and cybernetic accoutrements. Wear this, breathe heavy, demand the plans, slice off your son’s hand, have a change of heart while the Emperor electrifies said son, and…fade to black, roll credits. You just successfully lived a “Vader Life.”