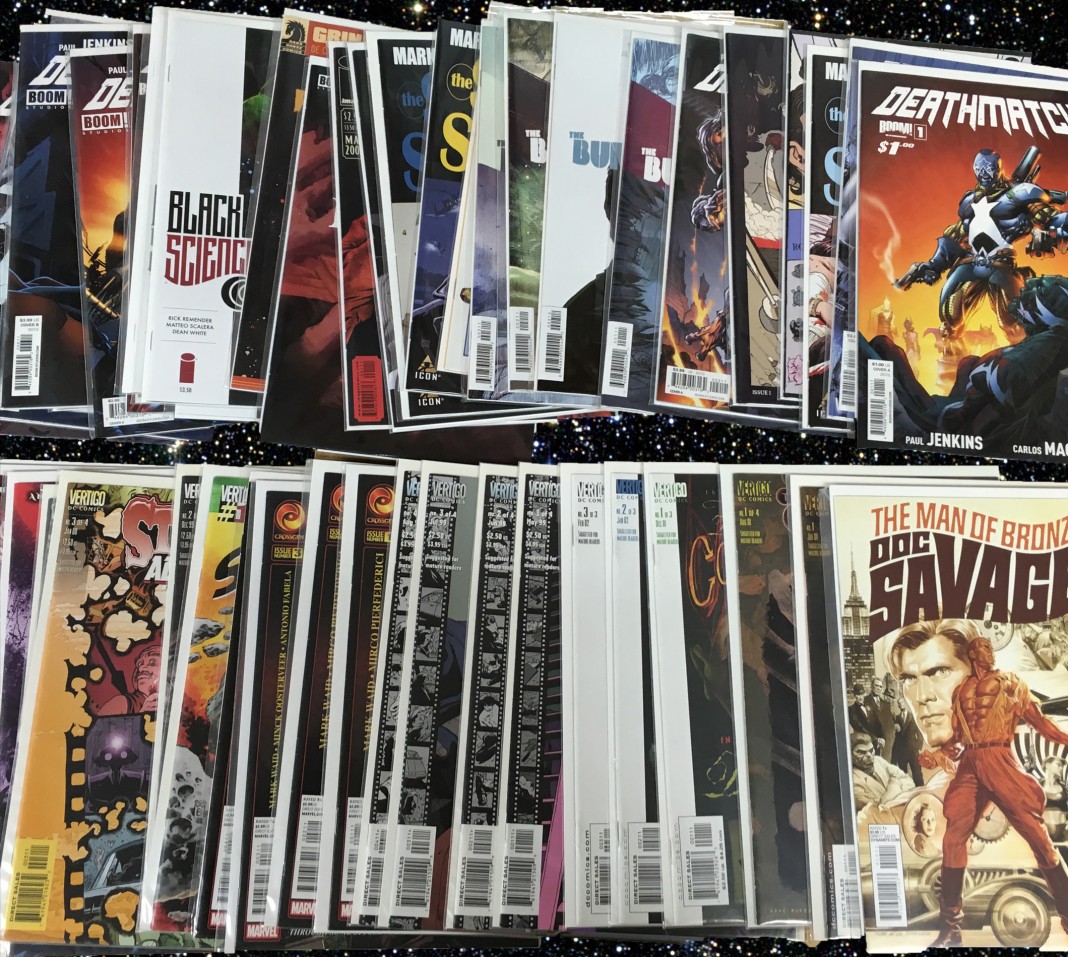 Yes, it’s time for another installment of WIN MY COMICS! Wait…how do you win my comics? Well, the rules haven’t changed; simply tell me why – in the comments section below – you deserve my comics! Be ridiculous, be desperate, and be silly and overly emotional. Heck, you can even be honest. Whatever your angle, just remember; if your reasoning is incontestably logical, or hilariously humorous, you might just find yourself with a batch of free, bagged and boarded, very well cared for comic books!

So, what’s the Indie Comic Assortment (Part One)?

Deathmatch (Boom Studios)- Issues 1-9, 11,12.
Written by Paul Jenkins with Art by Carlos Magno.
What’s it about? Superheroes wake up imprisoned. Adding insult and EXTREME injury to injury, they’re forced to fight each other…to the DEATH!

Secret Service (Marvel Icon)- Issues 1-4.
Written by Mark Millar with Art by Dave Gibbons.
What’s it about? Secret Agent uncle trains misbehaving nephew in the ways of a super-spy.

Bee Vixens from Mars (Dark Horse)- Issue #1.
Written by Alex De Campi with Art by Chris Peterson.
What’s it about? It’s like a grindhouse film in comic book form. Enjoy!

Doc Savage: The Man of Bronze (Dynamite) – Issues 1 and 2.
Written by Chris Roberson with Art by Bilquis Evely.
What’s it about? Pulp super-man Doc Savage outsmarts, and out-punches, evil!

Umbral (Image)- Issues 1 and 2.
Written by Antony Johnston with Art by Christopher Mitten.
What’s it about? Good grief; it’s been a while. I vaguely remember 2 kids dealing with dark magic. Something to that effect.

Sovereign (Image)- Issues 1-3.
Written by Chris Roberson with Art by Paul Mayberry.
What’s it about? This is a world-building, Game of Thrones-type epic. You’ll like it.

Black Science (Image)- Issues 1-3
Written by Rick Remender with Art by Matteo Scalera.
What’s it about? Dimension-hopping team of scientists trying to find their way home.

Bunker (Oni Press)- Issues 1-3
Written by Joshua Hale Fialkov with Art by Joe Infurnari.
What’s it about? Characters’ future-selves try to warn present (or is that past?) selves about impending global destruction.

The Empty Man (Boom Studios)- Issue #1.
Written by Cullen Bunn with Art by Vanesa R. Del Rey.
What’s it about? There’s a virus going around called The Empty Man…and that’s all I can remember.

Strange Embrace (Image)- issue #1
Written by David Hine with Art by Rob Steen
What’s it about? Horror comic. Can’t really remember the details. You’ll like it.

Scion (Image)- Issue #1.
Written by Ron Marz with Art by Jim Cheung.
What’s it about? Remember Crossgen? They had some pretty cool stuff, but sadly, it went under. That’s what happens when your company sends a signed soccer ball to Marvel; it’s a portent of terrible things to come. Oh, and I can’t really remember anything about Scion.

Sandman Presents: Everything You Wanted to Know About Dreams (Vertigo)- One Shot.
Written by Bill Willingham with Art by Various.
What’s it about? A bunch of short stories about The Dreaming.

The Dead Boy Detectives (Vertigo)- Issue #1.
Written by Ed Brubaker with Art by Bryan Talbot.
What’s it about? Two dead detectives; they are boys.

The Sandman Presents: The Corinthian (Vertigo)- Issues 1-4 COMPLETE SERIES
Written by Darko Macan with Art bt Danijel Zezelj.
What’s it about? The Corinthian is a murderous entity from The Dreaming with teeth for eyes. That piques your interest, right?

Scene of the Crime (Vertigo)- Issues 1-4 COMPLETE SERIES
Written by Ed Brubaker with Art by Michael Lark.
What’s it about? In one of Ed Brubaker’s very first, published comic book works, a PI is hired to investigate the disappearance of a young girl…who happens to be involved in a cult. Edgy stuff.

Okay…I just shot the cap-gun, blew the whistle and and elbowed a Garbage Nymph (WHAT?). Now, go ahead and let me know why YOU deserve to….