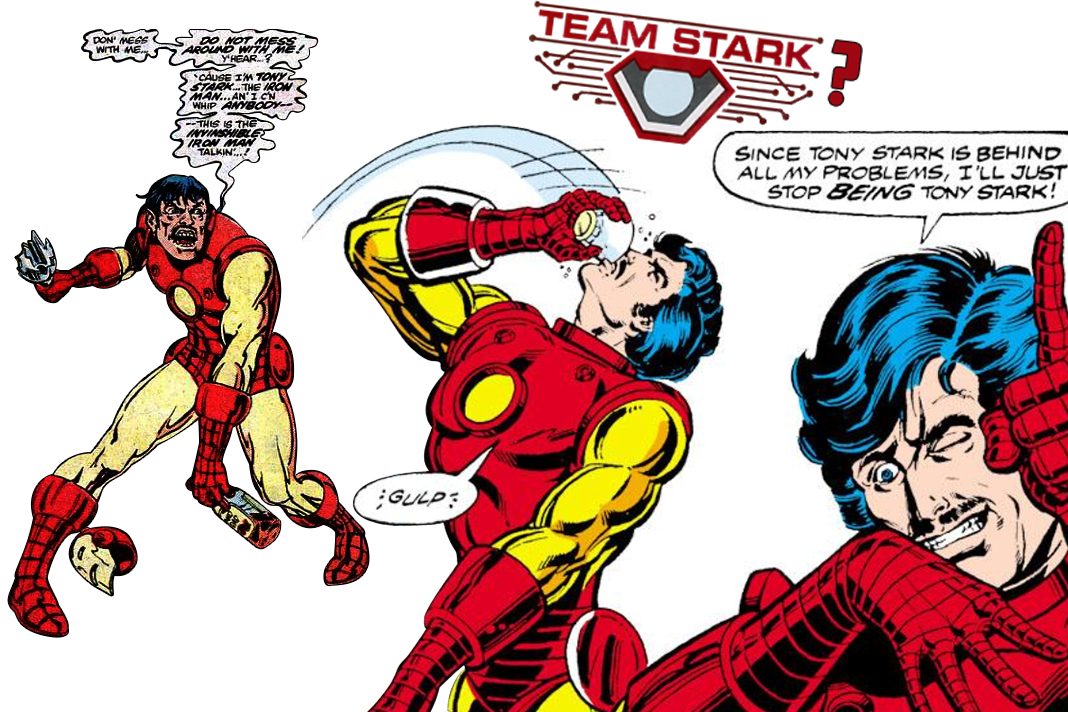 “Whose Side Are You On?”

Earth’s throat rests on a razor’s edge as ideological differences have created an exponentially expanding rift between two influential factions within the superhero community. As this fracture widens to irreparable proportions, heroes assembled from around the world are careening at break-neck speeds toward a full blown superhuman Civil War. With bated breath, Earth’s populace is poised to view the inevitable, no-Repulsor-blasts-barred grudge match between Team Iron Man and Team Captain America. Self-described genius, billionaire, playboy, and philanthropist Tony Stark would lead you to believe that he has the superhero community as well as the world’s best interests at heart. Additionally, the promises splattered across social media by the charismatic Iron Man hope to mask his astonishingly blood-stained ledger. As a result, a majority of the population has fallen for Mr. Stark’s political tactics and have blindly consumed the proverbial Kool-Aid in regards to his restrictive ideals concerning the superhuman community. For all of those individuals who have been inescapably duped by this pseudo-politician’s cheap form of propaganda, here are 5 reasons to secede from Team Iron Man and assemble with Team Captain America.

5) Iron Man is a brilliant inventor and charismatic salesman, not a leader. Captain America has successfully lead The Howling Commandos and The Avengers to victory.

“Actually, he’s the boss. I just pay for everything and design everything, make everyone look cooler.” – Tony Stark, Avengers: Age of Ultron

Tony Stark is, without a doubt, one of the smartest and most charismatic men in the Marvel Universe. However, being one of the smartest men on the face of the planet does not necessarily make one a great leader. In fact, one could argue that Tony Stark is a genius who is merely the face of his company. At the beginning of the first Iron Man film, Stark’s charismatic presentation of his cutting edge missile technology is a selling tactic that ultimately sold his new weapon to soldiers in Afghanistan.

Moreover, it is obvious that Obadiah Stane is in control of the company. This role would eventually be filled by Pepper Potts after Stane completely loses his mind, creates the Iron Monger suit from Iron Man Mark I blueprints, and attempts to dispense poetic justice by murdering Tony Stark with his own technology.

Some could even describe his tenure of leadership at his company as an utter disaster at best and a catastrophic failure at worst. With a nearly non-existent track record of successful leadership of his company, it is not surprising that Tony would truly shy away from being the leader of the Avengers. After their success in retrieving Loki’s scepter, Tony even makes remarks to Maria Hill that Steve Rodgers is the true leader of the Avengers.

Tony has relegated himself to more comfortable roles within the group: financier and inventor. Although it is not entirely surprising when considering his massive ego, it is remarkable – given Stark’s track record regarding leadership – that he seeks out such a role within the United Nations-sanctioned Avengers. If one thing is for certain, Tony’s lack of leadership abilities regarding his own company spells certain doom for an individual on his side throughout Captain America: Civil War. This should serve as a large red flag for anyone who has aligned themselves with the Shell-Head.

At the other end of the spectrum, Captain America has had a great deal of success in leading The Howling Commandos and the Avengers to victory against their enemies. Although this is not the same as running a multi-billion dollar business, Captain Rogers certainly has a great deal of experience with war. When considering the inevitable war that is erupting between each superhuman faction, it makes the most sense to align one’s self with someone with successful leadership experience.

4)  Iron Man’s legacy is dressed in death’s trappings. Captain America’s legacy will always be the preservation of life.

Before his tenure as Iron Man, Tony Stark’s company was founded on the development of cutting-edge weapon technology. Stark Industries’ success as well as Tony’s exorbitant wealth hinged on the effectiveness of his weapons killing enemies. Throughout his career, Stark could be considered a merchant of death, peddling his weapons to any group or individual who could secure this technology through legal as well as illegal means. Although it was never Tony’s intention for the technology to be illegally procured by The Ten Rings, ignorance of the act does not excuse him from the inevitable repercussions.

Additionally, his initial desire to procure wealth from dealing out death is less than noble. In the end, Stark’s encounter with The Ten Rings is what ultimately led to the creation of Iron Man. This personification of the phoenix metaphor is also what galvanized Stark into changing the direction of his company as well as his life. However, this is not the complete 180-degree turn one would suspect from someone in his position. Tony has continued to create weapons through the continual evolution of the Iron Man suits, outfitting the Avengers, as well as his more popular genocidal invention: Ultron. It seems that Iron Man’s legacy will always be shrouded in death.

Killing in the name of one’s country is always a difficult topic to discuss. Some individuals ride either side of this particular fence. Instead of debating this particular topic, I think that it is important to note that Captain America’s desire to preserve lives does not equate to him being apprehensive in regards to taking lives. The Sentinel of Liberty’s service in World War II dictated that the soldiers often performed nightmare-inducing operations. The distinct difference in Captain America’s motives is that he did not strictly profit from the deaths of his enemies. Captain America had to make hard, life-altering decisions to preserve life and liberty throughout the world. What sets Rogers apart from Stark is that he was not seeking profit from dispatching his enemies. Although his actions are haunting, his intentions were initially nobler than that of Iron Man.

3) Iron Man’s fear of failure has led to his desired restriction of freedom. Captain America is the Sentinel of Liberty.

Ad nauseam, Iron Man’s best laid plans for saving the world are turned against him. The Mark I Iron Man armor was reconstructed by Obadiah Stane to create his Iron Monger suit. The Arc Reactor was corrupted by Ivan Vanko to create his Whiplash weapon. Extremis, a project he helped refine for Maya Hansen, was implemented to create homicidal, regenerative super-soldiers led by Aldrich Killian. His suit of armor around the world, Ultron, attempted the genocide of the entire human race. Although Stark has always found a means of solving each of these problems, he has also possessed a small amount of responsibility for their creation. If one was to continually watch his or her plans place the world in jeopardy, it is reasonable to assume that this individual would wish for more restriction on operations.

However, restricting individual freedom out of fear is one contributing factor that led to the rise of the Nazi party in Germany. This is something that Captain America strictly fought against throughout the course of World War II. One can imagine that this is something that he would not want to see happen to his allies. Giving up our freedoms out of fear is a slippery slope. Captain America wishes to preserve the freedom of the Avengers to act when necessary and not when dictated by a committee.

2) Iron Man is an alcoholic who abuses his powers when inebriated. Captain America is incapable of getting drunk.

The events of Iron Man 2 and the Avengers confirm that Tony Stark is an alcoholic who abuses his powers when inebriated. This innate characteristic is highlighted throughout the course of the birthday party at his mansion. Stark becomes increasingly intoxicated and begins shooting bottles out of the air with his Repulsor beams in an incredibly dangerous variation of skeet shooting. This drunken act inevitably endangers several of the individuals enjoying his party. Moreover, his alcoholic tendencies are highlighted during the climax of the Avengers. As Loki invades Stark’s residence, Tony’s initial reaction is to offer the villain a drink. Let that sink in for a moment. With the world on the line, Stark resorts to drinking liquor and offering a drink to his enemy.

Captain America: The First Avenger establishes that Steve Rogers in incapable of becoming intoxicated. Although Rogers does not have a penchant for becoming incredibly intoxicated, it is physically impossible for him to do so because of the super-soldier serum. As a result, it is impossible for him to abuse his powers in a manner similar to Tony Stark. This fact, coupled with Captain America’s successful leadership of two teams make him the ideal leader of the Avengers. Additionally, his moral compass inspires confidence in those trusting his judgment in regards to superhero freedom.

1) Iron Man is a documented super-suit wetter. Captain America has a penchant for standing up to the bad guys without his powers or bladder spasms.

No one wants to be known as that person who wet themselves. Moreover, no one wants the leader of their superhero team to be known as that person who wets their super-suit. Tony Stark urinated in his Iron Man armor willingly while under the influence of alcohol at his birthday party (above). If he urinates in his suit of his own free will, one must also assume that he does so when monsters are demolishing the city. This does not necessarily inspire confidence in those individuals following his lead. Without his special abilities, Steve Rogers was known for standing up to the bad guys without having uncontrollable bladder spasms. Based on this information it is incredibly clear that one should trust Captain America’s leadership.

This message is approved by Captain America and was paid for by the Entities against the Regulation of Enhanced Individuals. Captain America: Civil War will divide movie audiences on Friday May 6, 2016. Be sure to show your support for Team Cap on opening night.