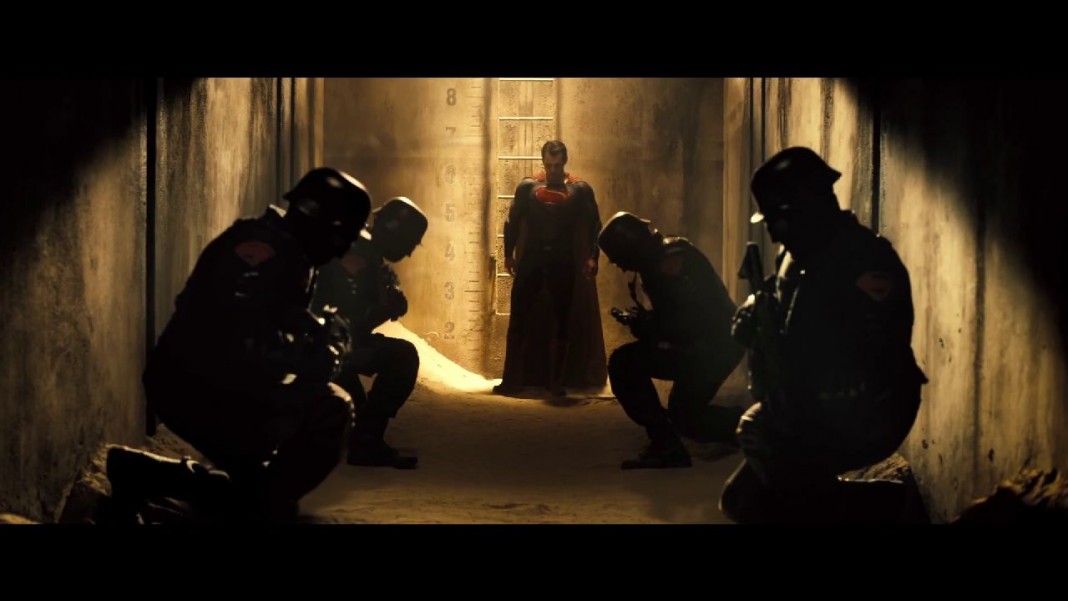 Fans were aching to get any sort of Batman V Superman footage after the trailer aired at this year’s San Diego Comic-Con, and while it took a little bit longer than some hoped, we got a new teaser during the fall finale of Gotham. To get us ready for the new official trailer debuting tonight on Jimmy Kimmel, I thought it would be a good idea to put together a Batman v Superman teaser trailer analysis. So without further ado, let’s get to it!

The teaser opens with Batman in what seems to be an underground prison. He’s chained to the roof and dressed in the same outfit we saw in the Comic-Con trailer; it’s like Mad Max meets Batman. Along with The Caped Crusader we see he’s accompanied by four other men who are dressed similarly to him, minus the cowl and gauntlets. The men in this scene instantly remind me of The Sons of Batman who were members of the mutant gang in Frank Miller’s The Dark Knight Returns. After Batman defeated the Mutant leader, a few of the members were inspired by the actions of The Dark Knight and decided to fight crime with him.

Next, we see Superman crash down into the prison. As he looks forward, men in the hallway wearing the Superman insignia bow before him. He begins to walk past them, looking rather… evil. The Man of Steel approaches Batman, and for the first time, you can see that Batman is actually scared. Superman rips off the cowl to reveal Bruce Wayne, looks at it, and the teaser ends.

Now, what I think is happening here is one of two things:

I’m inclined to think this is the case here. A few months back, El Mayimbe of Heroic Hollywood reported that at some point during the film Bruce will have a dream sequence where *POSSIBLE SPOILER ALERT*  he relives the death of the second Robin Jason Todd, and Joker shooting Barbara Gordon in the spine. Perhaps this is another section of the dream sequence where he lives in a world conquered by Superman? This could possibly be a nod to Injustice, where the Justice League are transported to an alternate timeline where Superman is seen as a dictator and has established a new world order. What adds fuel to this theory is that a toy by Mattel was unveiled at New York Comic-Con called Knightmare Batman. It’s the exact same outfit that Batman was wearing in the 3 minute trailer from Comic-Con, and the most recent teaser.

2: Superman Is Being Controlled by Lex Luthor, or This Is Bizzaro.

This one doesn’t have as much evidence as the previous theory, but it’s definitely worth mentioning. The same scowl that the Man of Steel has in the teaser is the same one he has in the Comic-Con trailer. Lex Luthor waves his hand over him (kind of like a Jedi) and Superman looks up angrily. Now here is where it gets super-interesting. If you remember, Lex Luthor is currently in possession of General Zod’s body. What if, instead of using Zod’s body to synthesize Kryptonite as previously speculated, his body is used to create another Superman, and NOT Doomsday? Think about it, it’s quite possible. Zod and Superman have pretty much the same set of powers, and it would explain why those Superman Regime guys were bowing to him when he entered the room; we know how much Zod loves having people bow to him.

So there we have it. Again, there wasn’t a whole lot to analyze, but there were a few interesting tidbits to take a look at. Don’t forget that tonight, on ABC, we’ll be getting a new FULL trailer for the film during Jimmy Kimmel. What are you hoping to see in the new trailer? Let us know in the comments below!