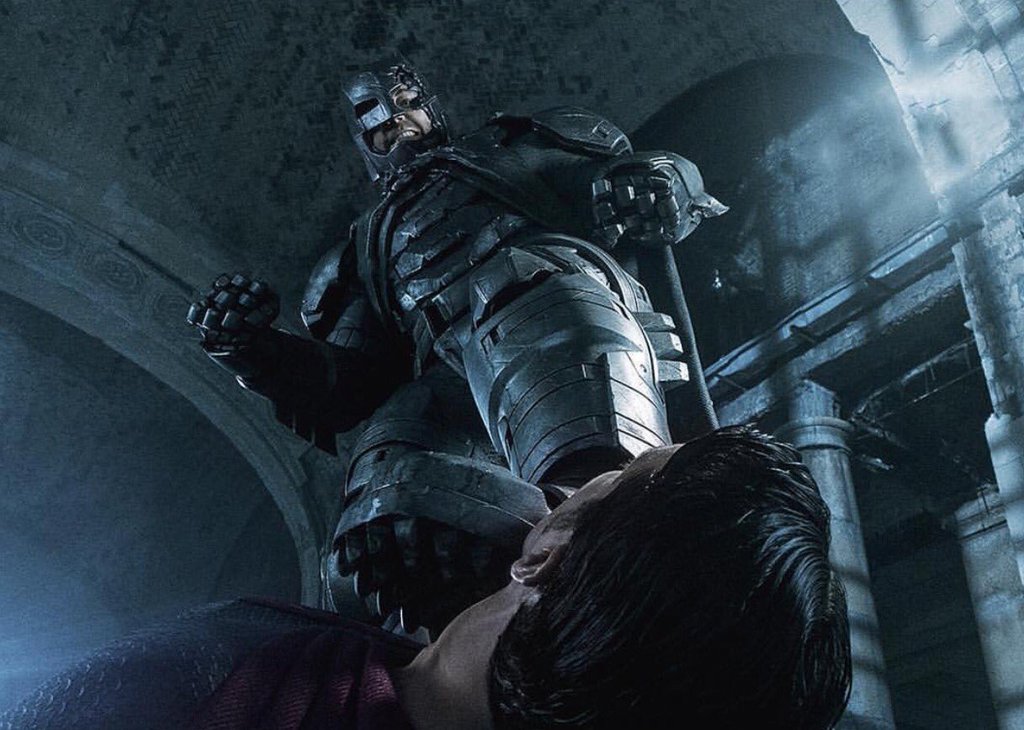 “The greatest gladiator match in the history of the world. Son of Krypton versus Bat of Gotham! God versus man! Day versus night!”

Since the inception of the Golden Age of comics, modern philosophers have analyzed and debated one of the most divisive queries in all of existence. Merely posing such an inquiry to loved ones behind closed doors has ultimately led to marred marriages, ravaged relationships, fractured families, and leveled lives. Simply whispering this question in hushed tones can melt the minds of frothing fanboys within a five hundred mile radius and render them incapacitated as they passionately expound upon their positions for hours on end. On Friday, Zack Snyder unleashed DC Comics’ two most prized possessions from the proverbial toy chest in an attempt to answer the question, “Who would win in a fight: Batman or Superman?” Incorporating heavy doses of action and unique cinematography, the director attempted to settle this debate once and for all as he smashed these icons against one another with childlike fervor for the audience’s viewing pleasure. However, it was already widely acknowledged that Batman would unequivocally decimate Superman when engaged in battle. If you haven’t seen the movie, we’re vindicating this position and offering five reasons why Batman will kick Superman’s @$$ in Batman V Superman.

5) Batman is a Master Escape Artist

For as long as Batman has been an active force for good in Gotham City, his villains have attempted to end his life by trapping him in elaborate, often preposterous, death traps. In every situation, The Caped Crusader has been able to escape death through the use of reasoning and puzzle-solving skills. This is the direct result of his tutelage under the greatest escape artists within the DC Universe.

There is no deadlier trap than a no-holds-barred cage match against Superman. Possessing a plethora of powers, The Man of Steel is a deadly adversary for The Dark Knight. One of the methods that Batman may use to defeat Superman is through the use of ingenuity as well as utilizing the art of deception to level the playing field.

4) Batman is a Master Strategist

“But that’s the thing about Batman. Batman thinks of everything!”

In Batman: R.I.P., Batman’s mind comes under attack by the mysterious Dr. Hurt and his sinister organization, The Black Glove. Beaten, drugged, and mind-wiped, Bruce Wayne is left to spend the rest of his life as a homeless addict roaming the streets of Gotham City. It is only once the brutal Batman of Zur-En-Arrh emerges from Bruce’s damaged psyche that his true plan is revealed. Batman has created a back-up persona in the event that his mind has been tampered with by some outside force.

In JLA: Tower of Babel, it was revealed that Batman had betrayed his superhuman cohorts by compiling a list of their strengths and weaknesses. Additionally, Batman created contingency plans for neutralizing every member of the Justice League under extreme circumstances. Batman’s ultimate mistrust of those with powers in addition to his superior intelligence enable him to be prepared for every inevitable situation.

Batman will most certainly bring this insane level of preparation to a battle against Superman. It is preposterous to consider that Batman would enter this encounter without obscene levels of preparation and training. Ultimately, it is this trait that will provide Batman with an edge over the Man of Steel during combat.

3) Batman is a Master Inventor

The obsessive level of preparation that Batman implements in his crime fighting techniques also leads to the creation of some of his most impressive gadgets. Secretly working with Lucius Fox and a team of scientists at Wayne Enterprises, Batman adapts cutting edge technology for use in his war against crime. Each of these gadgets is designed with the intent to neutralize their target as well as provide Batman with the ultimate edge in battle.

2) Superman Will Be Holding Back/Kryptonite

“Stay down! If I wanted it, you’d be dead already!”

With the utterance of these words, it is apparent that Superman will be holding back in his battle with Batman. Perhaps this is the direct result of his controversial execution of General Zod, and his newfound desire to preserve the life of his enemies. This is not an edge that Batman provides to any of his opponents during combat. Moreover, Batman will exploit this inherent weakness to gain the upper hand against the Man of Steel. Additionally, if merchandise and trailer spoilers are to be believed, Kryptonite will have a presence within the film, and Batman will not hesitate to utilize this deadly substance in defeating his enemy. Merchandise suggests that Batman will use a Kryptonite gun in his duel against Superman. The inclusion of a Kryptonite weapon spells certain doom for The Man of Steel.

Using this evidence, it is possible to conclusively state that Batman will kick Superman’s @$$ in Batman v. Superman: Dawn of Justice. Whose side are you on? Are you Team Batman or Team Superman? Weigh in on the debate using the comment section below, and go experience the epic battle in theaters!