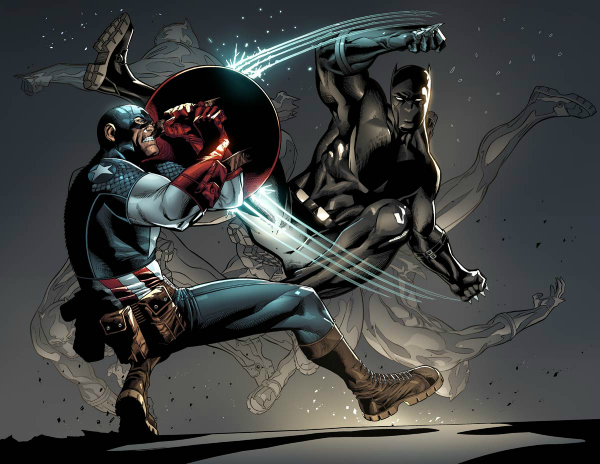 Legendary comic book character Black Panther makes his cinematic debut this May in Marvel’s Captain America: Civil War! What’s he doing butting his cat-shaped head into the contentious business of Captain America and Iron Man? Well, it looks like a certain enhanced individual just blew the hell out of an African embassy populated, in part, by Wakandan officials. And the liberal dispensing of enhanced individuals to deal with enhanced terrorists seems to magnify the destructive potential of any conflict. So, the Black Panther, a representative of Wakanda, is very keen on ceasing the repetition of the previously mentioned explosive occurrence; he’ll do this by becoming intimately involved with catching the aforementioned terrorist, and submitting super-humans to legal accountability. In an in-depth interview with our friends at IGN, actor Chadwick Boseman (Black Panther) granted us a few insights regarding his character, and gave us Black Panther’s perspective on the Civil War conflict spearheaded by Iron Man and Captain America.

When asked how the Black Panther differentiates himself from Iron Man or Captain America, Boseman responded, “I think the difference in him is that he’s a ruler of a country. That’s the difference. I wouldn’t even call him a superhero. In the mythology of the country, he’s not a superhero. He’s a warrior, and it’s part of their tradition.” He noted in Wakanda, no one is asking, ‘Who is that masked guy that’s doing this stuff?’ “Everybody knows it’s him, and they expect that it’s him, and they pray to God, or even him in some cases, that he would do the things that he’s doing. Which is much different than most of the superheroes in which you don’t know their identity and you don’t know when they might show up. There’s an expectation that’s much different. So that’s the main difference.”

Boseman was also asked if Black Panther considers Cap and Iron man his equals, or comparable to his usual, amenable subjects.

“That’s a good question. I would say it’s both. There’s always going to be a sense, like if you’re a monarch, that you — it’s not a superiority, but I could always call rank if I have my own country, you know? [Laughs] There’s a space in which I rule. If I’m not in that space, it’s much different though. We’re not in Wakanda, as I said, and all is fair in love and war. Things become equal in war. If you’re not an officer on one side or the other, you can’t really pull rank.”