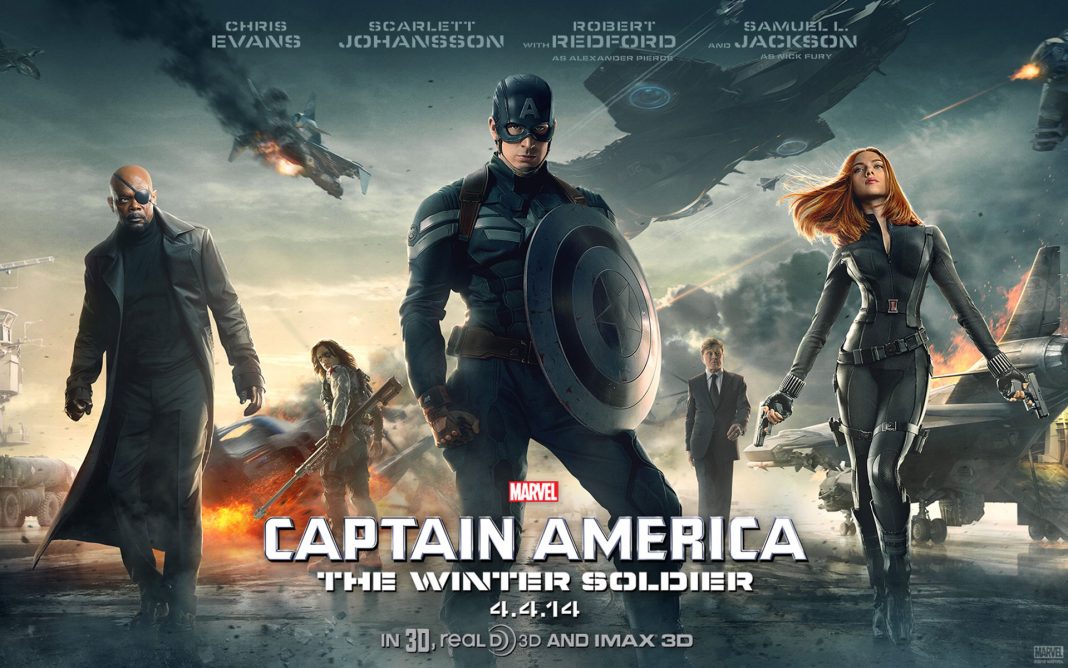 With the impending arrival of Captain America: Civil War, we are taking a look back at the movies that brought the MCU to this point. So take a trip back in time as we break down Marvel’s Phase 2 film-by-film. You can check out the reviews on Iron Man 3 and Thor: The Dark World here. Up next, our Captain America: The Winter Soldier Retro Review.

The Summary: Something’s rotten in the state of S.H.I.E.L.D. and Director Nick Fury doesn’t like it. That leads him to turn to the only man he can trust, Steve Rogers. Captain America is already disgusted by S.H.I.E.L.D.’s newest creation… a fleet of Helicarriers designed to eliminate threats before they happen. So now he doesn’t question taking a quick peek behind the curtain… only to find an old threat, growing from within: HYDRA.  The cherry on top, Rogers learns the evil organization has turned his former bestie Bucky Barnes – now known as The Winter Soldier – into an unstoppable covert killing machine, complete with a vibranium arm. Teamed only with Black Widow and his new BFF Sam Wilson, Captain America looks to stop HYDRA before they assume command of a trio of flying death machines… all while trying to save Bucky.  Plus… Robert Redford!!!

Pros:  There are so many positives in this movie, it’s hard to not ramble on. There’s Chris Evans’ performance as the morally conflicted Captain America. Evans gave much needed depth to the character, who previously was just known as the living embodiment of “Truth, Justice and The American Way.” Evans is a bonafide lead and the supporting players (Sam Jackson, Robert Redford, Scarlett Johansson, Anthony Mackie, Frank Grillo, Sebastian Stan, etc.) play their respected roles to superhero perfection.

However, the biggest stars have to be The Russo Brothers. I will freely admit I was skeptical when Joe and Anthony Russo first joined the MCU. Coming from a comedy background (mainly in television with Arrested Development and Community), I feared the movie would be to too humorous. However, the duo perfectly balanced the serious nature of The Winter Soldier with a mix of light character interactions and some of the best action sequences in the superhero genre. They nailed the incognito HYDRA story without leaving a plethora of plot-holes for the ‘smarks’ to point out. There’s a reason why The Winter Soldier is considered one of the best… if not the best… Marvel movie to date. Now I have come full circle and I cannot be more excited the the Russo Brothers are not only in charge of next month’s Captain America: Civil War, but they’re also taking the reins on The Avengers: Infinity War.

Cons: Listen, I can nitpick on how easy it was for Captain America and Black Widow to get Falcon on board (he needed no convincing). I could also complain about why Sharon Carter (Agent 13) needed a bigger role. But I’m not going to get into that. This was as close to a perfect superhero movie as we’re going to get, so I will not besmirch it with petty complaints.

Impact on The MCU:  No other movie had a bigger impact on the Marvel Cinematic Universe than Captain America: The Winter Soldier. While there were no Infinity Stones or Thanos references, there was the reemergence of HYDRA. Winter Soldier let us know the organization was back and bigger than ever. HYDRA has since turned up in two MCU movies since (Age of Ultron, Ant-Man), plus  Marvel’s Agents of S.H.I.E.L.D., and will soon poke its head up once more in Civil War (hello, Baron Zemo).

Winter Soldier also introduced us to new recurring characters. On the good side, Sharon Carter and new Avenger Sam “Falcon” Wilson. Opposite them, we get Brock Rumlow (soon to be Crossbones) and the Winter Soldier (in the processes of being reformed). What can be bigger than new characters? How about a new perspective for Captain America?

Steve Rogers no longer trusts S.H.I.E.L.D. and is questioning his own Government’s actions. We already saw this cause friction between him and Nick Fury. He also feels freedom shouldn’t come at a price (we already know how other Avengers feel about this… I’m looking at you, Stark). Steve Rogers is no longer just a soldier following orders… he’s willing to stand up against oppression and fight back if needed. The Captain America we see emerge in this movie is the reason we get the ball rolling towards a Civil War.

Ted’s Take:  If you couldn’t tell, I am a massive fan of this movie. It wasn’t just a great Marvel film, it was a fantastic, suspenseful espionage thriller. It not only carried the torch from The First Avenger, but it laid the framework for every Earth-based MCU movie to follow. It was a solid story, perfectly executed by two Directors who now hold the Marvel Cinematic Universe in the palms of their hands.

I already mentioned how much I loved the cast, but again… props for both Robert Redford and Frank Grillo. Redford brought gravitas to Alexander Pierce and his role really made the film seem like it should have been Oscar-worthy. Then there’s Frank Grillo. Despite not being the real bad guy (that was reserved for Bucky Barnes)… Grillo’s Rumlow emerged as Winter Soldier‘s best badass. I am legit scarred of this man, because he went toe-to-toe with Cap in that elevator. Heck, even being submerged within a collapsed building can’t stop him.

One last note; you can’t talk about The Winter Soldier without talking about the intense action sequences. While the final Helicarrier showdown is a perfect ending, I will always tip my cap to Nick Fury’s escape scene. This was the first time we got to see Fury kick a little ass and it didn’t disappoint. The chase scene was high tension and kept you glued to the screen. When it comes to a head with Barnes staring down Fury, before lighting his SUV up… you might need to catch your breath. Being able to deliver action sequences like this is what defines a great blockbuster. Knowing the minds behind The Winter Solder are in control of Civil War puts a smile on my face.

Up Next: Guardians of the Galaxy