The Cold War has been over for almost 3 decades, and in the spirit of glasnost it looks like the Russians have decided to get on the superhero train! The above video highlights their latest endeavor and let’s just say that is indeed a crazy Russian superhero film. If you haven’t seen the other trailers yet, I suggest you go take a look, but this one shows off the assembled team of mighty Russian heroes!

What might you see in the above trailer for Guardians, the crazy Russian superhero movie? You’ll get to see the team proudly display their powers. It looks like one has the ability to manipulate earth, stone and rocks and he probably makes that guy from Heroes feel totally jealous. Another one has lightning fast speed and crescent blades while another has the ability go invisible and utilize martial arts! An invisible ninja-lady? Sounds like Black Widow might have some competition. Of course, I saved the best (and most Russian) for last: a giant Were-Bear complete with chain gun! Look, if you aren’t watching or interested in the aforementioned crazy Russian superhero film then there isn’t anything I can do!

Guardians rolls across the Volga on February 23, 2017 and stars Anton Pampushny, Sanjar Madiev, Sebastian Sisak, Alina Lanina, Stanislav Shirin, Valery Shkirando, Vyacheslav Razbegaev, Alexander Semenov, and Vladimir Butenko. I’m sure you guys know who all of those guys are, right? 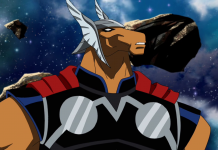