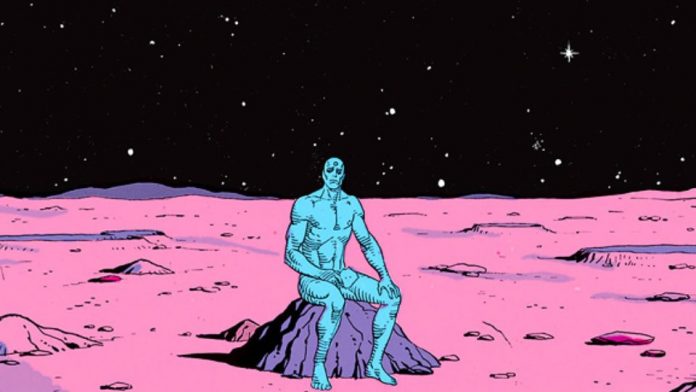 Holy crap; people are STILL bashing Batman V Superman: Dawn of Justice. Yes, it was critically divisive and yes, in some cases, said bashing was well-deserved. Among those planting themselves firmly in the “what the f*** were you thinking, DC (!!)” camp were prominent comic book creators and renowned filmmakers. Well, it’s time to add another name to the list of prominent creators who were immensely disappointed in Batman V Superman AND the overall direction of DC’s aggressively blossoming cinematic universe: Watchmen co-creator Dave Gibbons. In the following interview with our friends at Flicks in the City – during London’s MCM Comic Con – Watchmen co-creator Dave Gibbons bashes Batman V Superman, dislikes the apparent direction of the DC Cinematic Universe, and venerates the creative output of Marvel Studios.

“I feel that what is happening now with the DC characters in film, to my mind, is going in the wrong direction… What Marvel has seemed to have done is take their characters, with a dark side and a light side, and their humor and their pathos, and their human emotion, and they actually have a long vision of what they’re going to do. They put together films that are really entertaining, that are exciting, that do have threat and jeopardy, but have humor and a human quality to it, and a sense of hope. But I feel what DC has done particularly with the Superman vs. Batman movie is they really have taken a misstep on it. I mean, I wrote a comic book called ‘World’s Finest’, which was Superman vs. Batman, and what I homed in, and I am not saying this is the only take, but it might have helped, was you have Batman who is a dark hidden creature who lives in a dark evil city whose antagonist is a brightly colored clown. You got Superman who is a brightly colored figure, the yang if you like to Batman’s yin, he lives in a bright hopeful city, but with a villain, an opponent, who is a dark grey scheming business man. So the whole universes are completely complimentary. When I wrote my story, I got a lot of mileage out of crossing those over, and it turned out Luthor went to Gotham, and the Joker went to Metropolis, and the Joker wanted to black out Metropolis, and Luthor wanted to set Gotham on fire. So to me if you are doing Superman vs. Batman, the first thing, which is implied by the “vs,” is there has to be a difference, and I think where the latest film suffered was because they were both these dark opaque angsty creatures.”

Regardless of his opinion on the film, aligning with a significant amount of the critical media, Gibbons praised Ben Affleck’s Batman. The limited introductions of other Justice League members? Gibbons wasn’t a fan of the forced inclusion.

“I thought, I have to say that Ben Affleck’s Batman was brilliant. I thought if he’d been in a Batman film on his own… I also think DC sort of lost their nerve because Superman Vs. Batman, which is basically Frank Miller’s Dark Knight story, is enough for a movie without putting Doomsday in it, which is another complete Superman movie, without shoehorning The Flash and the Cyborg, and without Wonder Woman, she’s a movie in her own right.”

Gibbons mentioned his dissatisfaction with DC, and his appreciation for the narrative strength of Marvel movies.

“Perhaps at the moment, I’m less than 100% thrilled with DC. I’m certainly not coming down on Zack, but to my taste, they kind of missed the [inaudible] there. I think also Marvel have been really bold. They introduced the characters slowly, so when they put them all in a movie together, it gave me that same thrill as I had when a kid when they put all the characters into the Avengers. ‘Wow! They’re all in one comic!’ And the latest Captain America [Civil War] movie, the bit when the two teams run toward each other with all their powers blazing was just ‘Oh! Yeah! This is what comics are all about!’ I think Marvel have done it with verve and wit. DC kind of missed out on that.”

And then, Gibbons was asked about the inclusion of Watchmen characters in DC’s latest reboot initiative, DC REBIRTH #1. He kept his answer very, very brief, as he appeared very, very annoyed.

“I wouldn’t make the question too long. All I’m going to say is no comment. I have no comment.”