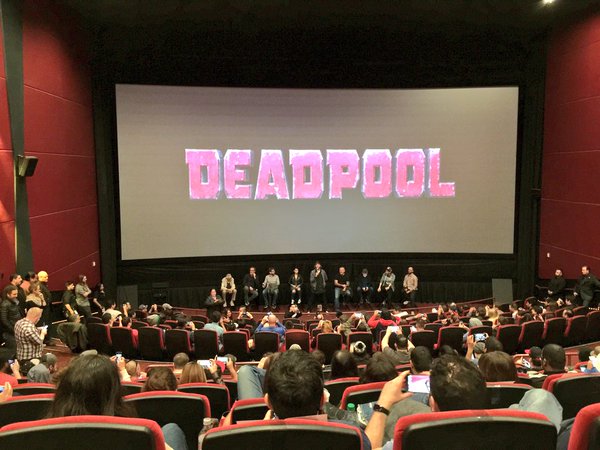 Surprise, Surprise! It looks like there was an early screening of Deadpool yesterday and lo and behold…the fans loved it. Hosted in New York City, Twitter immediately became awash in reactions to the movie and they’ve all been generally positive. No! More than that…they freakin’ loved it. Just look at some of the early reactions below!

Eddy @ItsEddynotEddie #Deadpool is so freaking drop dead awesomeness. Why did I use those words together well cause I just died #Vsauce

Rachel Howard @racheljhoward Just saw early screening of Deadpool. The movie is f**king amazing. Everything I was hoping for from the Merc with a Mouth! #deadpool

Rachel Howard @racheljhoward And like all marvel movies, make sure you wait for the tag at the end of the credits! Self aware and referential, perfect Deadpool.

Nadeshot @Nadeshot This is how I just spent my afternoon! OFFICIALLY ONE OF MY FAVORITE MARVEL MOVIES OF ALL TIME. SO GOOD!

Erick. @ErickGSinatra#Deadpool was freaking amazing!!!!!! So damn hilarious, so dumb & probably one of my favorite movies!!!! @deadpoolmovie

Andre Lee @andre30496@deadpoolmovie #DeadpoolMovie #Deadpool the movie was amazing!!! THANKS FOR THE EVENT AT NYC!

Pretty impressive, right? We wish we would have gotten an invite that’s for sure. Deadpool originally started off as leaked test footage and through the sheer determination of fans became a full-fledged film! It is also one of the few ‘R’ rated superhero films so hopefully it still does well. Starring Ryan Reynolds, Morena Baccarin, T.J. Miller, Ed Skrein, Gina Carano, and Brianna Hildebrand, Deadpool is set to be released on February 12th, 2016.