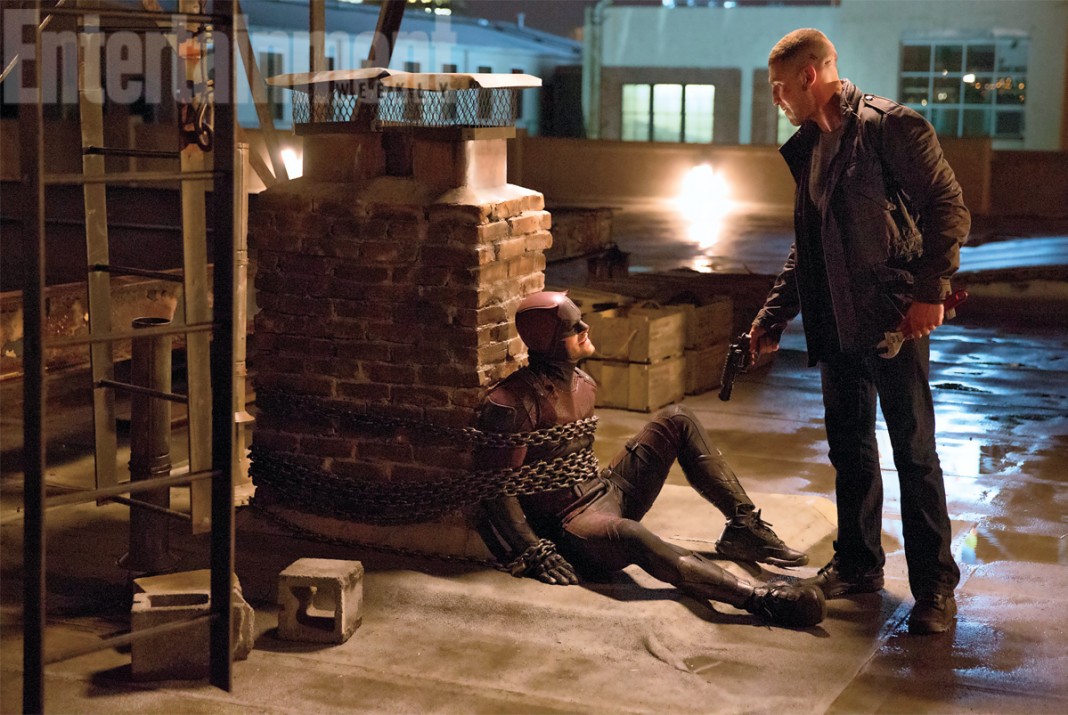 Our friends at Entertainment Weekly recently released not one, but TWO official images from Daredevil Season 2! YAY! The first image (above) shows the Punisher, portrayed by Jon Bernthal, standing over a soundly defeated Daredevil who appears to be chained to a chimney column. How the Punisher managed to maneuver the Man without Fear into this current predicament remains to be seen, but if the forthcoming series takes its cue form the comic, it could be the result of cleverly employed hypersonics. Regardless, this is a very interesting scene instigating a LOT of speculation, and prefaced by a LOT of brutal action. According to new Daredevil showrunners, Doug Petrie and Marco Ramirez, Daredevil Season 2 will be infused with the same brutal, gritty action fans became accustomed to in Season 1, but the dial will be turned up to… 11-ish. Petrie states, “The advantage of any sequel is you can dive right in. We hit the ground running and then we ran as fast as we f—ing could.”

The big draw for Daredevil Season 2 is definitely the Punisher, an ex-Special Forces soldier reeling from a tragic past, and reacting to it in an extremely divisive, controversial manner. You see, the Punisher stops criminals…permanently. Sure, Daredevil’s also a vigilante gifting violent perpetrators with an equally violent beat-down, but he refrains from pursuing more permanent methods. The Punisher, a solider already skilled in the art of killing and suffering from immeasurable loss, has no such qualms, though a modicum of inner conflict regarding his actions might still remain. Doug Petrie elaborates, aware of the conflict expressed by the Punisher, and the attitudes and divisiveness his actions tend to incite. “Viewers watching the show will be rooting for this guy with a gun but we’re also going to force people — the way we force Matt — to second-guess themselves,” Petrie says. “Taking lethal justice into your own hands is in America in 2015 is tricky s—t. We have not shied away from the rich complicated reality of Now. If you’ve got a gun and you’re not the police you’re going to incite strong feelings. We’re stirring the pot and we’re aware of the headlines where we live and we’re trying to get people to think.”

Marco Ramirez chimed in, comparing the Punisher to Taxi Driver‘s chaotic, antagonistic protagonist, Travis Bickle. “He has a different moral code,” he says. “Matt is a devout Catholic — and you rarely see a character who’s a devotee anything on TV. Frank has Hammurabi’s Code. It’s like letting a great white shark into the water.”

Another character making an appearance in Daredevil Season 2 is Elektra, the ultimate, evil ex-girlfriend (who also happens to be a super-ninja, which makes things especially complicated). Doug Petrie offers a little insight into Matt’s historically imbalanced Femme Fatale. “Matt’s a deeply moral complicated guy and she’s just the best bad girlfriend you can possibly have,” Petrie says. “She does everything wrong and attractive, she’s his id, the wild side. Matt is always taming his wild side. Elektra just lets it out. He’s both repulsed and deeply drawn to that.”

Speaking of girlfriends, Petrie and Ramirez also commented on the increased ‘sexiness’ of the forthcoming season. Case in point, the blossoming relationship between Matt Murdock (Charlie Cox) and Karen Page (Deborah Ann Woll). In this second, exclusive image from Daredevil Season 2, we see the two characters getting a little…closer. Hmmm. If the game of pool is considered foreplay, I’d say these two are about 15 seconds away from getting completely naked.

Psyched for Daredevil Season 2? Good, so are we!

When is it coming back? Sometime in 2016. Hurry, Matt! The anticipation is absolutely killing us!