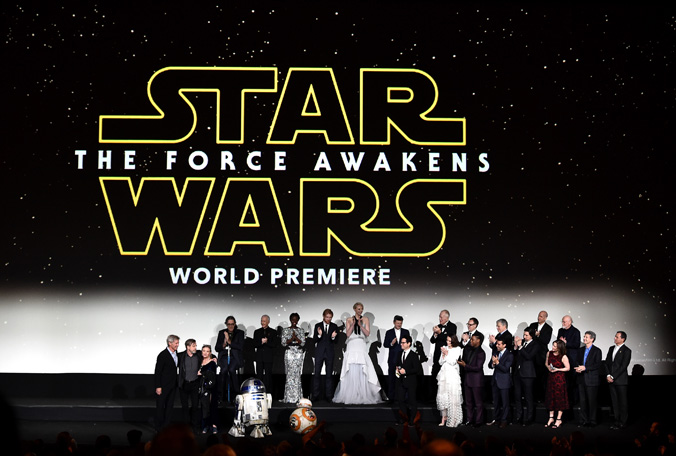 Monday, that being yesterday, was the Hollywood Premiere of J.J. Abrams’ Star Wars: The Force Awakens. Now, the rule passed down from Disney – subject to extreme enforcement by unbiased First Order Troopers – is a strict embargo forbidding the posting/publishing of official movie revues until later in the week. However, quite a few members of the premiere’s audience, including critics and stars of stage and screen, tweeted their reactions after viewing Star Wars: The Force Awakens. What’s the consensus? What did they think? Were they overwhelmed by the putrid stench of mediocrity, or enlivened by the filmic brilliance of an instant, inspiring, contemporary classic? Relax. Exhale. It’s all good. Don’t believe me? Read on!

Rainn Wilson from The Office tweeted:

“1st Star Wars review: it was epic, awesome & perfect. The cast was stellar. JJ killed it!”

“Among its many wonderful qualities, STAR WARS: THE FORCE AWAKENS passes the Bechdel test. Story, characters, design, humor — #StarWars fans, this is the movie you’re looking for.”

“The Force Awakens is soooo Star Wars, and Daisy Ridley is the business, and Star Wars.”

“Star Wars: The Force Awakens spoke to my every emotion. Most of them good, a few not, but overall it was an amazing, overwhelming experience.”

“Need to see THE FORCE AWAKENS again to properly judge the film. Was practically shaking in my seat while it played. Not going to say much till I see it again but rest assured THE FORCE AWAKENS is the best STAR WARS since 1983…maybe 1980.

Steven Zeitchik of the L.A. Times:

Hello, childhood! Remember me? It’s Tiras! That’s right, Tiras, the kid that played Star Wars from morning until the very next morning!  I missed you, childhood. It’s been a while.

Star Wars: The Force Awakens Debuts December 18th. It stars people portraying characters amidst a giant space battle. Look, we know who’s in it, what it’s about and when we can finally see it! Just…just…C’MON, DECEMBER 18th!