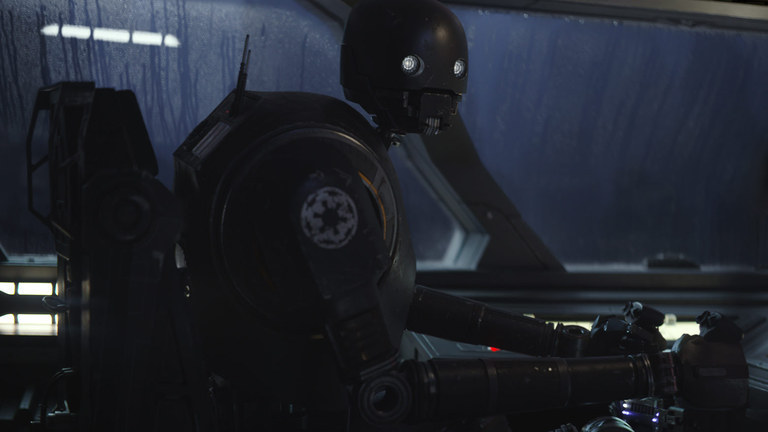 In only four weeks, Rogue One: A Star Wars Story will make its way into theaters, and we’re hoping to have answers for the following questions: Could Jyn Erso be Rey’s mother? How did the Rebels actually steal the Death Star plans? But perhaps the biggest question in need of an immediate solution is this: which character is going to steal the movie?

You could argue Mads Mikkelsen’s Galen Erso is a dark horse. The same with Saw Gerrera (Forest Whitaker) and even Chirrut Imwe (Donnie Yen). However, if you’re going to go with the smart bet, I recommend putting your money down on the newest droid the movie will introduce, K-2S0.

Now, droids have a strong history of stealing scenes in Star Wars movies. Of course, there are the O.G.’s in R2-D2 and C-3P0; they are the gold standard for robots in cinema.

The torch may have been officially passed after BB-8 emerged as a standout star from The Force Awakens. Now, it’s K-2S0’s turn to keep droids atop the fan-favorite list.

It won’t be easy for Kaytoo. He’s not the cute, rolling droid like BB, and he doesn’t have the beeps and bloops like R2. Instead, this droid has a more evil look, which, as Rogue One Executive Producer and Visual Effects Supervisor John Knoll told Entertainment Weekly, is due to Kaytoo’s dark background.

“He’s sort of anthropomorphic, in that he’s got two arms, two legs and a head, you know, et cetera. But then Kaytoo has a little bit more sinister aspect in his original design because he starts off as an Imperial enforcer droid.”

While little is known about Rogue One, one fact that snuck out was K-2S0’s background. He was reprogrammed by Cassian Andor and is now loyal to the rebel commander. Still, his time in the Empire has led to his distinct look, since he’s based on a droid we’ve already encountered in the Star Wars Universe.

“There’s the Imperial probe droid and the sort of interrogation droid that have these black shells and a kind of sinister, evil-looking character to them.”

While a seven-foot android certainly will be intimidating on the big screen, I’m sure by the end of Rogue One K-2S0 will turn into one of the bright spots in the film. With nerd-tastic Alan Trudyk performing the motion capture, there’s sure to be some fun elements incorporated into the character. So, while he might have the look of a savage killing machine, he’s probably got a heart of gold. However, the same probably won’t be said about the anti-R2 unit… that being C2-B5.

The droids are always central to the Star Wars movies and K-2S0 might be the most unique one to date. I’m sure he’ll offer comedic moments, but with his dark, Empire background, we might get to see a droid show a depressing side we’ve yet to experience. It’s those reasons why K-2S0 could be the scene-stealer for Rogue One and why the movie will probably be better because he’s in it. Is it December 16th yet?