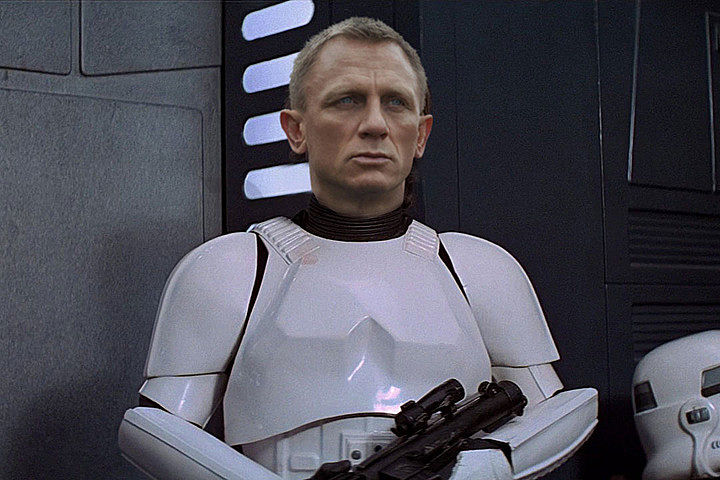 That’s right, James Bond had a role in the record breaking movie: Star Wars: The Force Awakens. What is his Stormtrooper identification according to IMDB?

If you haven’t run out to the nearest theater yet, here is a little incentive!

*Not an actual scene in the movie*

I wonder, does ’00-Stormtrooper’ fly a tricked-out TIE Fighter that launches rockets, disperses land mines or ejects streams of oil? Is he constantly pushing the big red button (on any number of vehicles/weapons) Agent Q demands he never press? Does a scouting mission to an outlying planet cluster – under tenuous Imperial rule – result in the accrual of incredibly beautiful women who, at first, attempt to seduce and assassinate, but end up falling in love? Hmmmm. I really think there’s a story to be told, here. Picture this: a special-agent Stormtrooper sent on super-secret missions that demand copious amounts of discretion. He’s an incredibly capable, highly skilled man of mystery, allure, and questionable integrity. He’s 00-Stormtrooper, and when he’s not busy bluffing through a hand of space-poker in an attempt to win a valuable, Imperial artifact from a less than hospitable Hutt, he’s….making out with random women.