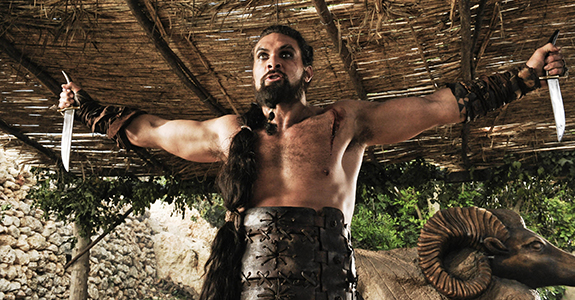 Behold, the mighty Khal Drogo! Wait, Khal Drogo is going to be in the Justice League movie? That’s just crazy! There has never been a Dothraki in the Justice League as far as I know but that does set-up an interesting Elseworlds story. Any-who, Aquaman actor Jason Momoa has teased an appearance of the famous Watchtower. What Watchtower you might ask? How about the headquarters of the Justice League! Yeah, now you know what I’m talking about. The below video highlights the former Game of Thrones working out…with the caption, ‘Getting ready for the castle. Watchtower’. Makes you wonder, doesn’t it?

Coach @wfmft getting ready for the castle. Watchtower.

As you can see, there isn’t much beyond that caption and I doubt those concrete blocks are part of the Watchtower, but could the actor be teasing that we will see the orbital headquarters of the Justice League? They are probably able to afford an orbital space station after all of those Youtube hits from Eisenlex’s channel. Joking aside, it would be impressive to see the home base of some of our favorite characters in Justice League, which will be directed by Zack Snyder of Batman V Superman fame.