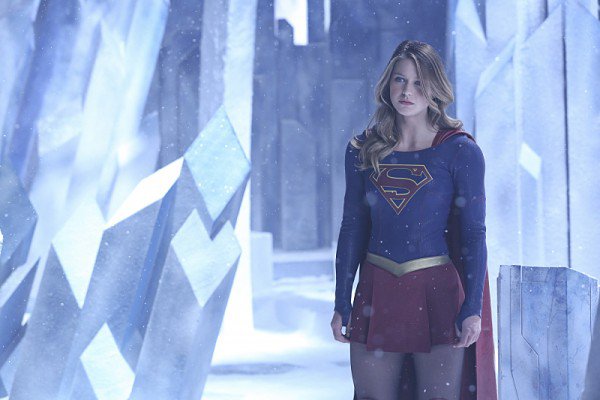 Check out Our Review [WITH SPOILERS] of Supergirl Episode 19: “Myriad.”

You want big? Well, this week’s episode of  Supergirl goes big as the evil Kryptonian Non gains control of every mind in National City.

Almost every mind that is, because Supergirl, Cat Grant, and Maxwell Lord are immune to Non’s mind control scheme. Known as Myriad, Non’s brain virus even controls Superman as Kara’s cousin is rather conveniently removed from the equation – but hey, at least he’s in the episode. And he’s still alive! Take that, Snyder!

Anyway, most of this really intense episode revolves around Kara and Lord debating whether to use a Kryptonite bomb to take down Non and his cronies. Sadly, the bomb will take out a large percentage of National City as well, but it will save the world from the Myriad virus. Alex and J’onn J’onnz try to play cavalry, but they are taken out by Non’s pet assassin, the living computer virus known as Indigo.

The episode is filled with villains as we get a cameo from the White Martian (a being even Non fears), and the debut of classic Superman foe, Maxima. A very comic book-accurate Maxima, I might add. With her flaming red hair and her burning desire to mate with Superman, this is the classic comic Maxima come to life. And let me tell you, former WWE Divas champion Eve Torres wears the red tresses of Maxima with panache. Maxima gets taken down pretty quickly by Supergirl, but hopefully we will have a full Maxima episode next season because Torres kills it. By the by, Maxima was a former member of the Justice League, so she kind of deserves a future spotlight episode, dontcha think?)

A heartfelt pep-talk by Cat Grant (who is immune to Myriad because of special signal-blocking earrings designed by Max Lord) convinces Kara to forget Lord’s murderous plan and take out Non on her own. Sadly, after Indigo takes down Alex and J’onn, Non uses Myriad to control Alex and sends her after her sister. Wearing a very Lex Luthor-like suit of Kryptonite armor and wielding the same Kryptonite sword that killed Astra, Alex charges into battle against her super-powered sibling. So, to stop Myriad and save the city, and to save Superman, Supergirl must go against Kara. The episode also contains the first meeting between Kara and Alex’s mom (played by Helen Slater) and J’onn, and a hilarious throw away lone where Cat Grant must fend off the sexual advances of…Harrison Ford? How hilariously meta.

“Myriad” is a gift to DC Comics fans, a  high-stakes Supergirl adventure that utilizes classic villainy to present the biggest hour of DC TV to hit the air this year.

Luke Cage Might Join the Avengers, But Only If It Pays

What’s Up with Agents of S.H.I.E.L.D’s Grant Ward?