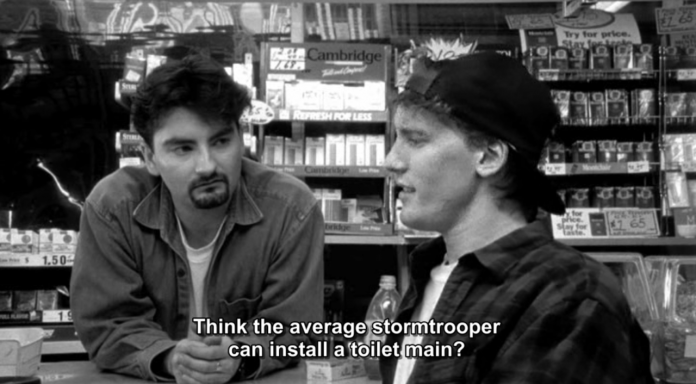 Man, that Kevin Smith…he’s suddenly all over the place! If he’s not talking about Batman or being a cheerleader for DC he is directing his daughter and Johnny Depp’s in movies. Apparently, there was a Kevin Smith cameo in Star Wars: The Force Awakens! Wait, seriously? Not only did we have Daniel Craig in there but Kevin Smith as well? Please tell me that Jay was in there too and that they were hanging outside of a space-gas station. Yeah!

According to ComicBook.com, Kevin Smith played one of the Stormtroopers that attacked Maz Kanata’s castle! He probably thought that Ben Affleck and Matt Damon were there filming Good Will Hunting 2: Hunting Season. His one cameo line? “We have incoming at 28.6! Move!” right after the Resistance and First Order start throwing down. He probably should have hooked up TR-8R with a sock full of quarters. I bet you probably heard that and knew right away…right? I wonder who else Lucasfilm was able to sneak in there? I hope Randall from Clerks managed to pop in there. “Look, okay, there was only one ‘Return of’ and it was ‘Of The Jedi’”. Ah, I just had to work that reference in there. How do you like them apples? (combo).