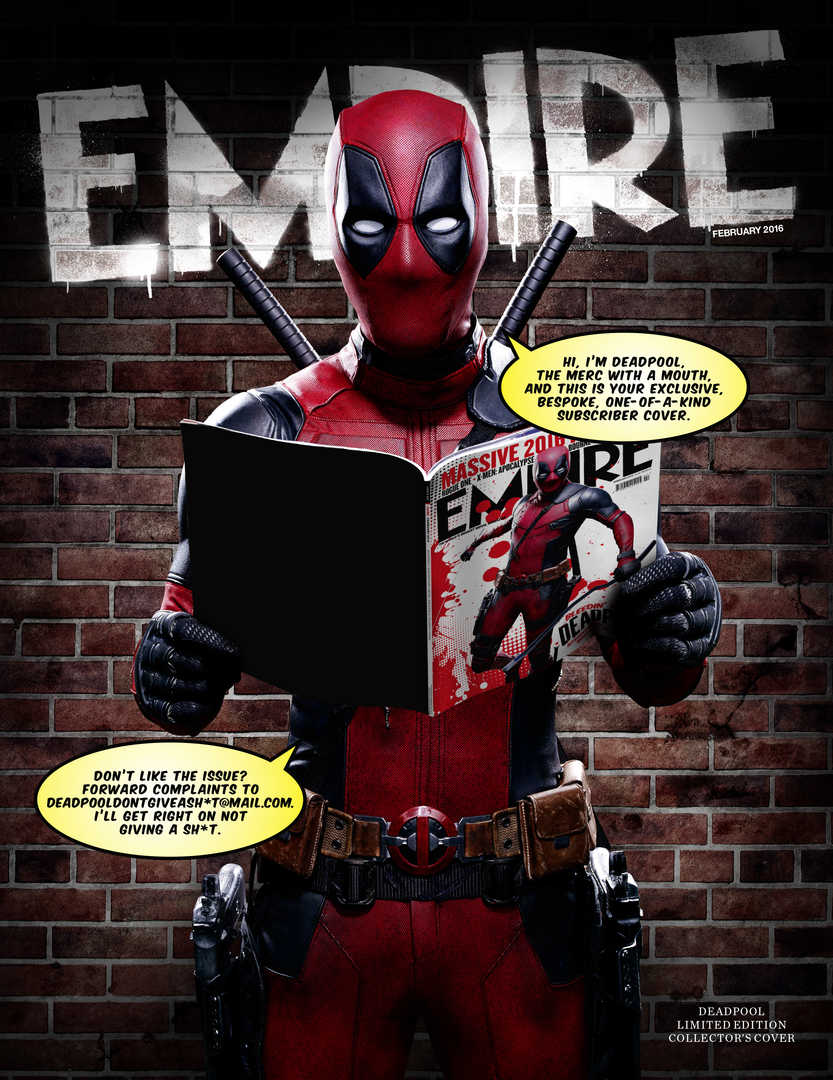 Look! It’s Deadpool! He’s on the cover of Empire Magazine! Again! Yes, this one is a little different, but it’s Deadpool! He’s on the cover of Empire Magazine! What makes it different? Well, it’s an exclusive cover for those who actually subscribe to Empire Magazine. Wait…what? You mean all information disseminated over the internet isn’t free? I’m having a hard time wrapping my head around this, but apparently, Deadpool doesn’t mind promoting information with a price-tag. Creators of original content actually getting paid for, and having some control over how their information is distributed? Perish the thought! Okay, I’m stepping away from this subject like a naked camper slathered in honey, desperately trying to avoid the pack of seventy-five, 300 foot-long honey worms who rend and suckle upon all flesh slathered in…honey. Oh, no.

Anyway, yes, it’s Deadool on the cover of Empire Magazine, and in his usual, unflappable, fearless, fastidious, fourth-wall breaking manner, he’s addressing you, the reader. Firstly, he’s glorifying the beauteous exclusivity of this particular magazine cover. Deadpool wants you to know that his person, taken in this particular picture upon this particular background and on this particular magazine….is a thing of splendorous uniqueness. Secondly, he wants you to know that he’s available to take your comments or complaints if you happen to disapprove of this particular magazine cover. Is he actually serious? Of course! He’s relaying his contact information RIGHT ON THE COVER! Just go to to Deadpooldontgiveash*t@mail.com, and let Deadpool know just how much you dislike his distasteful appearance on yet ANOTHER magazine. Also, this would be a good time to tell him about bagging his grass. That facially mutilated, mutant son of a b*tch mows his f*cking lawn without a bag, blowing his grass clippings all over my giant LEGO Predator diorama sitting on our back porch. It was hard enough finding the figures, and an even bigger pain in the @$$ finding movie-accurate accessories for said figures. Now, there’s f*cking grass all over Dutch’s 6-pack and I can’t brush it off for fear of grass stains. BAG YOUR GRASS, F*CK-HEAD!