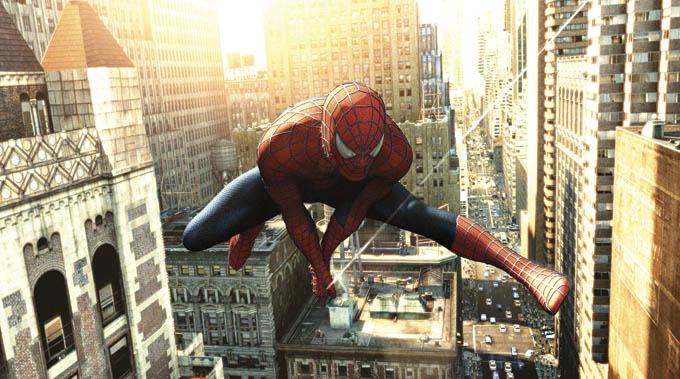 Marvel FINALLY graced us with the first trailers to Spider-Man: Homecoming, so now would be the perfect time to reflect on the franchise as a whole. Think about it. This is now the third iteration of everyone’s favorite web-head. Name another comic book character besides Batman in the past ten years who has been revamped as often as Spider-Man. You can’t.

There’s been some good moments in the franchises as well as some cringe-worthy moments. So, with all that said, here are my rankings of the Spider-Man film franchise from worst to the very best.

Making fun of this movie is like picking low-hanging fruit, but there are some things that need to be said. This movie is the reason why babies cry. When I saw The Amazing Spider-Man 2, for the first time in my life I actually regretted seeing a movie in theaters. At least when I saw Green Lantern, it was so bad I had a good laugh about it. This particular film was just awful. Garbage. The plot about Harry Osborn (Dane DeHaan) needing Spider-Man’s (Andrew Garfield) blood to possibly cure his inherited illness was bizarre. They reduced Harry from a vengeful former friend to a whiny, annoying brat.

Let’s talk about some of the true injustices perpetrated by this film. This movie reduced J. Jonah Jameson, one of the most prominent Spider-Man characters ever, to an e-mail! No appearance, not even a phone call. An e-mail. And, let’ not forget introducing Norman Osbourne (Chris Cooper) just to kill him five minutes later. What was the point? I’m not even going to talk about the ending where they just teased us with a battle with the Rhino (Paul Giamatti).

I was actually envious of Gwen Stacey (Emma Stone) when she was tossed from the top of the clock tower to her death! At least she didn’t have to suffer watching the rest of the movie.

I was skeptical when they announced back in 2010 they were rebooting the franchise. Andrew Garfield was a passable Peter Parker and Emma Stone made a good Gwen Stacey. But to me, the movie just isn’t memorable; it’s just boring. I can’t recall a single, memorable aspect from The Amazing Spider-Man. Chocolate milk was a key mcguffin, I think.

Middle of the Road: Spider-Man 3

Before we as a society were punished with The Amazing Spider-Man 2, Spider-Man 3 was considered the worst Spider-Man film. Well, not anymore in retrospect.

In 2007, this and Transformers were the two most anticipated films not just for the summer, but for the year. I have to say if you watch it now, it’s not nearly as bad as some people make it out to be. Thomas Hayden Church as the Sandman is easily the best part of this movie, and he looked exactly like Flint Marko; it was like the character stepped right out of the comics. The Sandman special effects were great as well.

And yes, I have to mention how they really dropped the ball with Eddie Brock/Venom (Topher Grace). I know they were aiming for a hybrid of the original version and the Ultimate version of Eddie, but it just didn’t work. Instead of being angry for Peter Parker running his career, Eddie came off as annoying.

Also gotta’ mention the unofficial fourth villain of the movie besides New Goblin, Venom and Sandman: dancing Peter Parker. I know they were aiming for the alien symbiote to alter Peter Parker’s behavior as it did in the comics. However, in the source material, it made him more aggressive; it didn’t turn him into a swinging jazz cat. Something got lost in translation.

I’m giving credit where credit is due. Some may argue 2000’s X-Men is what kicked off the superhero craze in Hollywood, but 2002’s Spider-Man is where the comic community really made its presence known. Sure, we get bombarded with comic book-based films all year long now, but back then, maybe one every few years at best. After this movie became the first one to make over $100 million at the box office its opening weekend, the game changed forever.

The job director Sam Raimi did was just astounding. You can tell he LOVES Spider-Man just by watching a few minutes of this movie. The way the action sequences are shot and the perfect design of the Spider-Man costume show his passion for the character.

Also gotta’ shout-out Willem Dafoe as Norman Osborn/Green Goblin. He was off-the-walls crazy as Spider-Man’s arch-nemesis, especially in the scene when he met his own alter-ego.

And let’s not forget JK Simmons stealing the show as the Daily Bugle’s Editor J. Jonah Jameson. Didn’t even know he existed until Spider-Man.

And by process of elimination, the best Spider-Man movie to date….

Not only is Spider-Man 2 one of the best sequels or comic book movies ever made, it is also one of the best films I’ve ever seen, period. Every single minute of this is so entertaining. To me, this film is the standard by which I measure all comic book-based films by. I cannot name a single flaw in this movie.

I didn’t expect Raimi and company to top the job they did in Spider-Man, but they elevated their game to a completely different level. Tobey Maguire was the best as Peter Parker, now a couple of years into his tenure as Spider-Man, really wished to have a normal life.

Alfred Molina did an outstanding job as Doctor Octopus, and Kirsten Dunst was great as Mary Jane Watson. James Franco also shined as Harry Osborn, who began his path of vengeance against Spider-Man, who he thought killed his father in the first movie.

The best parts of the whole movie are the fight sequences. Just watch the bank fight between Doc and Spider-Man…

…as well as the train fight.

Spider-Man 2 perfectly captures the essence of the comic book. There are moments in the film that are right out of the comics.

This was also the first film I ever made a point of seeing more than once in theaters. Saw it opening night, then that Saturday. Also saw it a month later in IMAX and then once more for good measure.

Seriously, I can’t name a single flaw in this movie. Perfect in every way possible.

Agree with my rankings? Disagree? Let me know in the comment section below!