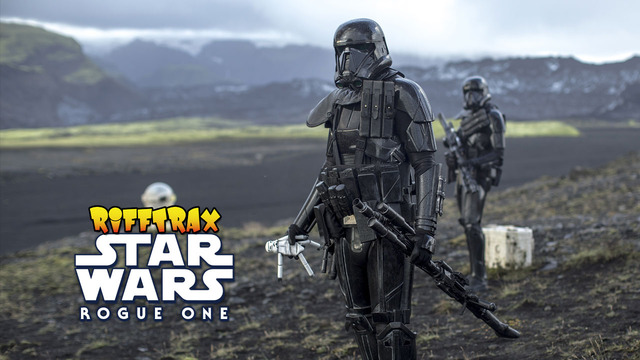 If you think Rogue One: A Star Wars Story is kind of a boring movie, the guys at Rifftrax are sure to enhance your viewing experience with their riff of the first Star Wars spinoff!

Rifftrax is made up of Michael J. Nelson, Bill Corbett and Kevin Murphy. They got their start on Mystery Science Theater 3000 back in the day. The trio have been releasing MP3s of humorous audio commentary for movies since 2006. Some riffs in the Rifftrax library include The Dark Knight, Indiana Jones and the Kingdom of the Crystal Skull, The Hunger Games, The Avengers, Twilight and the other seven Star Wars films.

I think Rogue One is just “OK” and nowhere NEAR as great as The Empire Strikes Back as some claim. Felicity Jones’s Jyn Erso is the only interesting character in my opinion. For some reason, I didn’t see the same movie universally revered by Star Wars fans.

“Is it ’cause your taste in movies stink? I mean, you do like the Transformers series and various Adam Sandler comedies.”

First of all, how dare you! Happy Gilmore, Grown Ups and Just Go With It are solid comedies. Secondly, since when is liking Transformers a crime? And C (or “thirdly”), if you like Rogue One that’s completely fine by me. I feel it’s over the top when people say it’s “the best Star Wars movie since ‘Empire.‘”

The jokes certainly makes the movie more watchable. Nelson, Corbett and Murphy point out all the odd inconsistencies throughout the spinoff. Like how useless are the AT-STs? Why did Orson Krennic and the Deathtroopers park their ship so far away from the Erso moisture farm in the opening scene?

This is one of their better riffs. My personal favorites riffs include Jaws, The Force Awakens and Starship Troopers. They even have riffs for Jurassic Park and Raiders of the Lost Ark, proving no matter how great a movie is, it still has riff-able moments.

Even if you think Rogue One is the best Star Wars film to date, you’ll still enjoy this riff. The jokes aren’t mean spirited. After all, if you can’t laugh at yourself — or Star Wars — then who can you laugh at? It is definitely worth the $3.99!

You can find the riff for Rogue One and other downloadable MP3s at Rifftrax.com