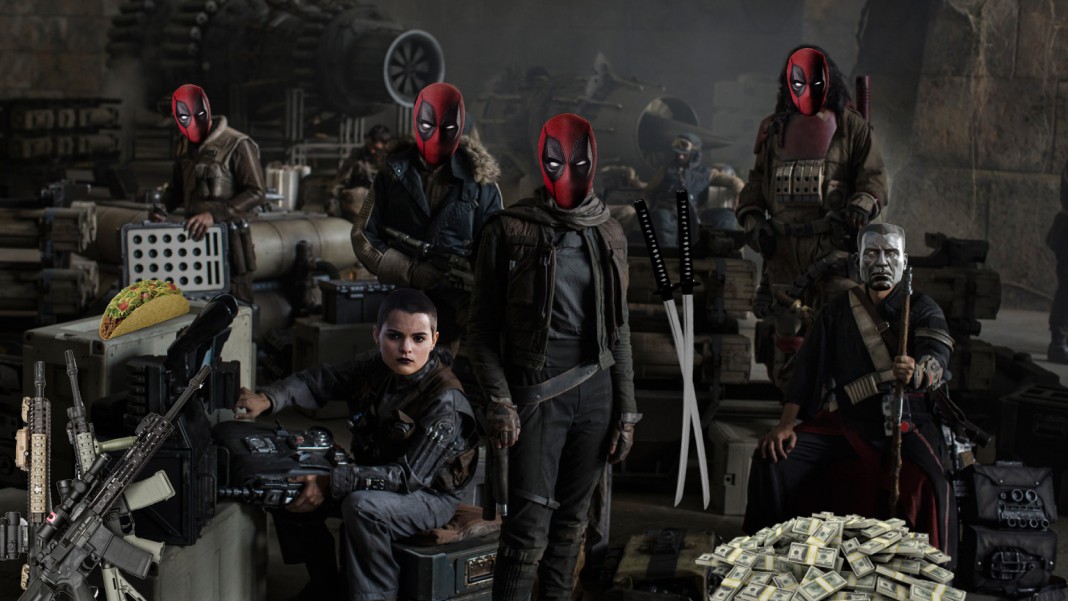 That’s right, gang! I did it! I finally made it into a mother f**king Star Wars movie!!! YES! Why am I so excited?? ARE YOU KIDDING ME?? These movies bring in like, $17,000,000,000 freaking dollars within 48 hours of hitting theaters. I mean, you clasp your mouth to that infinitely spilling teat and you will NEVER HAVE TO WORK AGAIN! EVER!!

Uh…just forget that whole…uh…prologue thing there. I was…I was obviously very excited about being in a Star Wars movie. Yeah, let’s just ignore the first paragraph, shall we?

(Psssst. See that little guy over there peering around the dumpster? That’s a freaking Ewok; a spying, stealthy little Ewok. I speak ill of Star Wars, or reveal any plot details, he reports back to Abrams and the aforementioned teat gets clamped! Deadpool NEEDS that Star Wars teat!!)

So, yes, I’m part of the AMAZING new line of Star Wars films hitting theaters in the next few years and I’m SOOO HAPPPY to be contributing! In which particular Star Wars film will I be making my official Star Wars debut? Why, a little movie called Rogue One: A Deadpool Story! Wait…what?? Look, just hear me out.

You see, I’m a highly decorated officer of the Rebel Alliance, and one hell of an X-Wing Pilot to boot. I once flew my X-Wing through the icy, carving dunes of Coldassh*tia (it’s near Coruscant) with a headless R2-Unit feeding me coordinates and navigational data that looked very similar to several episodes of The Smurfs. Yeah, it was very hard to determine my location when the only geography feeds I received consisted of tiny little mushroom houses blowing smurf-berry smoke from teeny-tiny chimneys. Anyway, it was a drag but I made it out of there, secured the…whatever I had to secure….and became the decorated Rebel hero I am today.

Of course, after this particular heroic act, I was selected to lead one of the most dangerous missions in the history of dangerous Rebel missions: steal Imperial plans to a planet-sized weapon of mass destruction! What did they call this giant orb with a galaxy-killing cannon for an eye? They called it…THE DEATH STAR! AAAAH! So, myself and my trusted, similarly masked Deadpools-in arms, including Colossus and Negasonic Teenage Warhead, are off to infiltrate impregnable, Imperial strongholds in order to successfully abscond with said schematics!! Will we succeed?? Well…kind of. We didn’t actually secure the plans, but don’t worry…I created my own. OBSERVE!