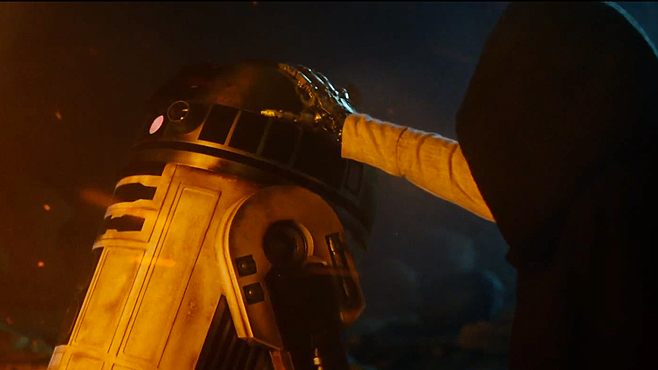 Okay, so if you haven’t seen Star Wars: The Force Awakens I suggest you turn away now. What are you still doing here? I said there be spoilers ahead, matey! Wait, there did a pirate accent come from? OKAY SO YOU’VE BEEN WARNED! One of the gripes directed towards Star Wars: The Force Awakens is that R2D2 was in his ‘low energy state’ when BB-8 found him. Sure, BB-8 had a section of the Starmap while R2D2 had the other part and R2D2 happen to wake up at exactly the right plot point, but hey, that’s Star Wars! I accepted that as is but apparently the internet is all a-flame. JJ Abrams then spoke to Entertainment Weekly to clear things up!

“BB-8 comes up and says something to him, which is basically, ‘I’ve got this piece of a map, do you happen to have the rest?’ The idea was, R2 who has been all over the galaxy, is still in his coma, but he hears this. And it triggers something that would ultimately wake him up. While it may seem, you know, completely lucky and an easy way out, at that point in the movie, when you’ve lost a person, desperately, and somebody you hopefully care about is unconscious, you want someone to return.” So I guess that answers that! JJ Abrams knew it was an ‘easy way out’ but we all loved it anyways. For those wanting a more definitive answer, we’ll have to wait for Episode 8!