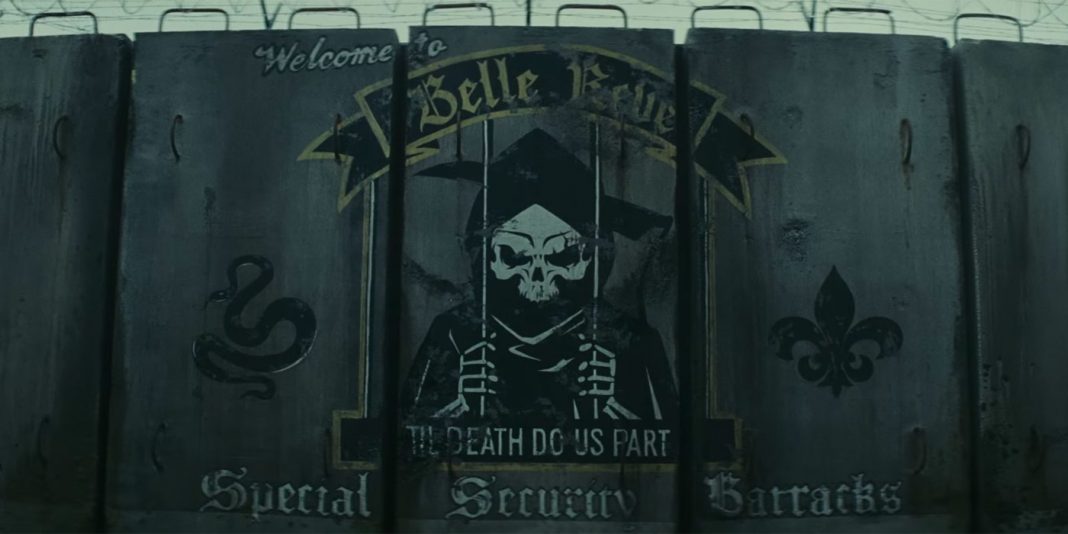 It seems every review of DC’s new Suicide Squad film hitting the nerdosphere is a review of other reviews or a comparison with Marvel or something other than a breakdown of David Ayers film, the third installment in the new DC Cinematic Universe. But we here at The Source like to review the, you know, actual film.

So here we go. Suicide Squad is a fascinating direction for DC Entertainment. It is a fringe comic property that saw its highest level of success in the 90s. It is a high concept that creators John Ostrander and Kim Yale explored to the hilt back in the day and it is a title that gives old school DC fans warm and fuzzy feelings. What Suicide Squad isn’t is instantly recognizable to casual fans, so DC took a gutsy turn for its third shared universe film.

Preamble aside- Suicide Squad is a very fun movie replete with some obvious flaws. It has an A-list cast that squeezes every ounce of charm out of every scene and even turns exposition dumps into entertaining experiences. This film is all about character as Ayer explores some of DC’s classic, villainous heavy hitters. Suicide Squad is a loving tribute to the works of Ostrander and Yale, Bruce Timm and Paul Dini, with a little dash of Silver Age love thrown in for good measure. Most of all, Suicide Squad is an absolute love letter to DC fans- and there ain’t nothing wrong with that.

Make no mistake; this film belongs to two women- Viola Davis as Amanda Waller and Margot Robbie as Harley Quinn. Davis looks and acts like she stepped right of the comic. She is stone cold, immovable, immoral, and just perfect as the matron of the Squad. Waller makes this film; her ambiguous morality is on display in every scene and in a world of superheroes, this unpowered woman is the most intimidating figure to appear on the screen.  Waller is one of the most compelling and unlikely playmakers in the DCU and Davis channels every inch of that Waller legacy.

Meanwhile, Robbie crafts her Harley Quinn into DC’s version of Deadpool, a likable and cosplay darling that steals every moment. Robbie is a scene-chewing delight, a sizzling bad girl with nuance – a mallet-wielding tribute to the good works of Dini and Timm with a little layer of modern day, bad girl wish fulfillment thrown in for good measure. DC fans will love Harley’s arc in this film, from Joker’s moll from Batman: The Animated Series to reluctant hero of the Amanda Conner and Jimmy Palmiotti comics of today. This film has a clear idea of what it needs Harley to be and Robbie nails it so hard it feels like she is about to become the biggest star in Hollywood.

Sadly, Suicide Squad does not have as clear an idea of what it wanted the film’s big bad to be.

The threat in this film is an absolute mish-mash of ideas. The Enchantress takes the roll of the film archvillain, and her scenes are where it looks like the Warners brass took the reins from Ayer and created this disjointed bit of something that was part Ghostbusters and part Maleficent. Ayers and company should have probably gone with a more grounded threat, something like HIVE or Kobra. Most of the Squad members are pretty grounded (well, as grounded as a human crocodile and a magic sword-wielding samurai woman can be), and seeing Deadshot and his guns, Harley and her bat, and Boomerang and his blades go up against Sumerian demons, well, it just doesn’t hold together. There’s a great many characters in this film so it was hard to find the story real estate for the villain, but it would have given the film more resonance if the threat was as engaging as the heroes.

Speaking of the protagonists, the narrative heart and soul of this whole thing is Deadshot (Will Smith). The film really focuses on the daughter angle of the character and downplays the death wish that has made Floyd Lawton such a legendary DC anti-hero. I was reluctant to embrace Will Smith in this role, not because of the race swap – who gives a damn about that sort of thing anymore – but because I didn’t feel Smith would be hard-nosed enough to be worthy of Deadshot. And if he was, I feared a Clint Eastwood riff on the character. Boy was I wrong; Smith played the role with stone faced honor and integrity, and I’ll be damned if I wouldn’t be the first in line to see Smith play the role in a Deadshot solo film.

Everyone else in the film was relegated to supporting players from the stiff-backed but oh-so-very-human Joel Kinnaman as Rick Flag, to Adewale Akinnuoye-Agbaje’s note perfect Killer Croc, to Jai Courtney’s scummy Captain Boomerang, to Jay Hernandez’s shockingly likeable and tragic El Diablo, and to Karen Fukuhara’s silent but deadly Katana. All these roles are lovingly replicated from their DC Comic’s counterparts. DC fans will have a blast with it while Muggle filmgoers will be left scratching their heads at times. There is an awful lot to take in for the uninitiated from magic to mutants to everything in between, and it doesn’t always snap together comfortingly unless one has lived with these characters for decades.

And then there’s the Joker. I’ll say it; I hated some of the Joker’s costumes. The Joker would not tolerate cheap looking bling and pimp coats. Wardrobe hiccups aside, Jared Leto nails the role with a manic energy that was just different enough from Heath Ledger to remain respectful of the late Ledger’s legendary portrayal of the Clown Prince of Crime.

So, if you’re a long time DC fan, you’ll love this movie. If you’re a fan not familiar with the source material, you might be very confused by the incongruous elements of this film. But just about everyone will be charmed by the cast and the chemistry that dilutes the sometimes paper thin plot of this film. Suicide Squad is really the first DC Universe film that isn’t trying to do a Christopher Nolan impression. Suicide Squad is a rollicking addition to the DC Universe that gets to the verge of falling apart at times but manages to pull it together through a series of loyal comic book performances by some of Hollywood’s best.