The Russo Brothers, the guys currently in charge of Marvel’s Civil War and Infinity War, were at several panels over the weekend at Wizard World New Orleans. We are sure that there will be more and more information coming out of that but at the moment it looks like the folks over at ComicBook were able to snag this quote from Joe Russo regarding who will be getting the spotlight in the upcoming Infinity War movies; it looks to be that we shall see more of the supporting Avengers!

“Everything is finite, right? Nothing can last forever. It’s cyclical. Some New Avengers in phase 4 are going to become prominent and then maybe some Avengers might not be around anymore. So, we’ll see how all this plays out but you have to treat every character with respect. I think it’s interesting that if you’ve seen four or five movies with the lead character having an arc, I want to see some story telling from some of the secondary characters. We’re focusing on that right now with Infinity War while we’re breaking into those movies, [asking] which characters can we pull to the forefront who potentially haven’t had their own ‘A’ story arc to this point. I think you’ll see that the supporting Avengers are going to become primary Avengers.”

Ah, so we won’t be seeing too much focus on the ‘established’ characters like Iron Man, Thor, Captain America, Ant-Man, and the likes…which leave us with who, exactly? Well it looks like it would be Scarlet Witch, Vision, Hulk, Black Widow, Hawkeye, Falcon, or War Machine. My guess it will be Scarlet Witch, Hulk, and Vision, but I guess we will have to wait till Infinity War comes out on May 2018. 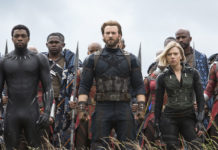