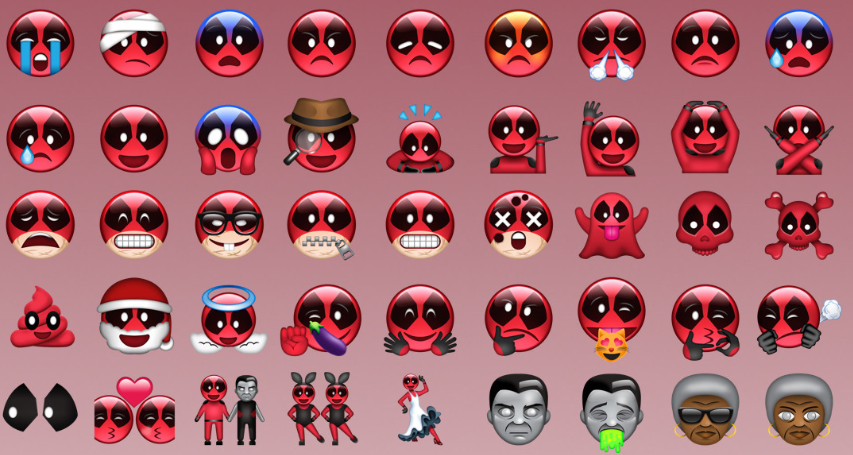 Today, the 12 Days of Deadpool promotion (effectively entertaining us until the new Deapool trailer hits Christmas Day) revealed something especially handy, a sure necessity in a world where ridiculously cute, perfectly circular and perspiring faces deftly encapsulate and convey our most complex emotional states. Yep, that’s right; it’s an incredibly clever and unreasonably robust selection of Deadpool-themed Emoji! CHECK IT OUT!

My personal favorites? Hmmm, it’s tough, but there are a few that pop out as being especially aggravating/entertaining:

1. Pile of Deadpool Poop. I know it’s infantile, but poop never fails to amuse. Deadpool poop = magnified amusement.
2. Vomiting Colossus. Just because Colossuss’ exterior is invulnerable, doesn’t mean his interior is equally resilient. Want to beat Colossus? Tell him you’ll make breakfast, but refrain from cooking the eggs properly. BANG! Salmonella!
3. Deadpool hands in the midst of hand-washing. Assassinating corrupt national dignitaries, corrupt, embolism-inducing mutants, or corrupt car salesman (meaning all car salesman), is dirty, dirty, DIRTY business. Imagine all that assassinating taking place up close and personal with a pair of serrated, cleaving swords. That puts the ‘assassinator’ in the range of a heck of a lot of blood-spray. So, after bathing in a body’s forcefully ejected, life-sustaining liquids, it’s massively apropos to demand and maintain a certain level of acceptable hygiene. Killers, no matter how skilled or how humorous, need to wash their hands after every confirmed kill.

Interested? Want to add these Deadpool Emoji to your current emoji armada? Good.

Go here for Apple Devices.
We ask that you go here for Google Play.