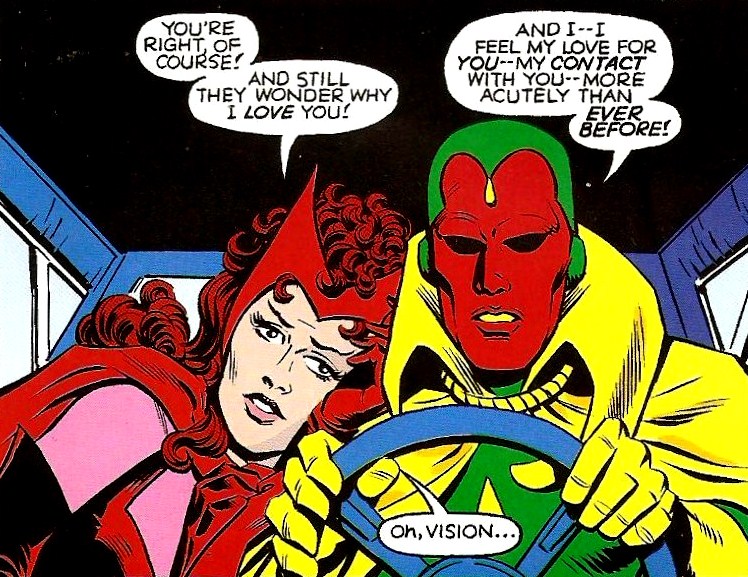 Before we get going, here is your warning that spoilers from Captain America: Civil War will certainly show up below. So let this be your warning and keep reading at your own risk. One of the best parts of Captain America: Civil War was how every Avenger involved got time to see their character grow. No talent was wasted. That’s especially true for Vision who seemed to have a budding relationship with Scarlet Witch, a relationship that might may have hindered his effectiveness, inciting the following, internal struggle we’re calling…the Vision vs. Love

The seeds for Vision’s romantic feelings were hinted at during Age of Ultron, when the android came from nowhere to save Wanda Maximoff from a free-falling Sokovia. It appears that since their European adventures, Vision and Scarlet have become more than co-workers. The man behind Vision, Paul Bettany, talked about the attraction between the two in an interview with Entertainment Weekly.

“They both have these new burgeoning powers that they don’t understand, and they don’t know how powerful they are, and that must be kind of scary. And so I think he’s worried that they’re both dangerous. So he feels this real connection with her. And she’s a bit of a depressive at the moment so he’s just trying to cook for her.”

It was during that dinner sequence when we learned two things about Vision. First, he needs to use seasoning in his dishes (granted he said he’s never eaten food before). Second, he is developing human feelings, especially towards Maximoff. That was evident when he told her he wanted the rest of the world to look at her as he did.

It’s a real 180-degree turn from the Vision that first appeared in AoU. In that outing, Vision was focused only on logic. Sure, he didn’t want to kill Ultron since he was unique, but understood that letting a killer robot live would lead to more deaths. However, as Bettany noted, Vision’s new brand of thinking… is leading to judgement issues.

“You see him in the first movie, he’s born. He’s omnipotent, but he’s incredibly naïve. And in this movie he’s kind of beginning to take a more paternal role in the superhero family, and he’s growing at an exponential rate, and by the end of the movie he has a real emotion and real human reaction and he makes the first mistake that he’s ever made.”

It was a doozy for a first mistake. After the epic airport showdown, we see Vision caring for a beat-up Scarlet Witch. Stark wants him to take down a fleeing Falcon, but Vision fires a beam nonchalantly… which not only misses Sam Wilson, but clips War Machine, sending him crashing back down to Earth (leading to his paralysis).

“What happened there is that his judgment was clouded there by real love and affection,” said Bettany. “And he responded in a quick and thoughtless way.… I really love that the moral compass of the movie is this synthetic person who’s trying to figure out what it means to be human. It’s a neat idea, you know?”

It’s neat unless you’re one of the characters in the MCU. Thor only let Vision keep that mind stone since he was thinking logically and could be trusted with a dangerous weapon on his forehead. Now with Vision thinking with compassion, it opens the door for a renegade android… complete with a weapon of mass destruction. It also seems the only one who can stop him… is his new love, Scarlet.

We probably won’t see Vision or Scarlet Witch again until the next Avengers outing in Infinity War. Should their paths follow their comic counterparts, then the duo would become the ultimate power couple… as in they would literally be a couple with the most power combined. If things go south, the fate of the world could be caught up in, and suffer because of their breakup. Should Vision become even more emotional, he could become an unstoppable force that could unite the fractured Avengers.

While Bettany didn’t give any hints at the future of the “Artist Formally Known as J.A.R.V.I.S.”, it’s clear Vision will be a major player in the future installments of the MCU. I mean he has to be. At some point, Thanos is going to come looking for that nice Infinity stone Vision is using as a hood ornament.