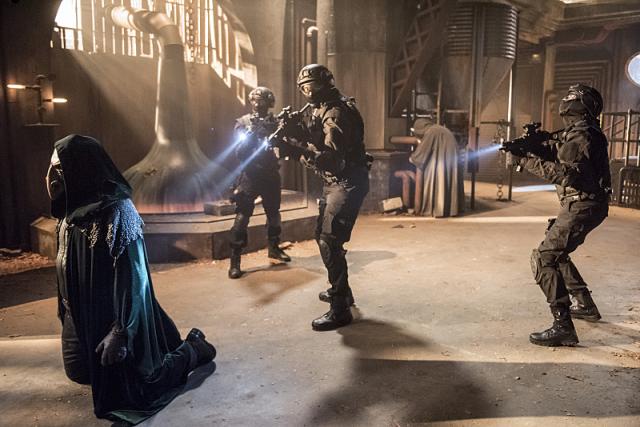 These are the 5 things that kicked us in the gall bladder (and sometimes in a good way) as we watched The Flash Season 3 Episode 6: “Shade. “And, our observations are a little “spoilery,” so…if you’re catching this tonight, I would bookmark this article and join us tomorrow morning. Still with us? Good, we’re always glad to have ya’.

That’s one hell of a cliffhanger, huh? It’s really not clear how Doctor Alchemy and the newly introduced god of speed Savitar fit together, but what is clear is that Savitar is here in a big  bad way and ready to be the season three big bad on The Flash.

For those not in the know, Savitar was created by legendary Flash writer Mark Waid back in the bygone days of 1995. In the comics, Savitar was a self-styled god of speed and took it upon himself to steal velocity powers from other speedsters. He was worshiped by a speed cult (which we saw this week), and really gave Wally West a hard time during Waid’s classic Flash run.

Comic book Savitar had nothing to do with Doctor Alchemy, but I’m curious how the TV series will bring all these disparate elements together. One thing is for sure, TV’s Savitar is one bad ass clucking M-‘effer.

After his appearance in DC Comics’ must-read opus Starman, Shade became one of the most fascinating characters in the DCU. The comic Shade was a benevolent trickster that lived to test heroes and help humanity from the literal shadows. He was a force for order that lived through centuries and was not afraid to get his hands dirty for the greater good. He was a complex entity that was as powerful as he was multi-layered.

The Shade that appeared on this week’s episode of The Flash is none of those things. TV’s Shade is a two scene chump with a semi-cool power that got taken out with handcuffs. Boy, when I heard Shade would be appearing on The Flash, I was psyched. Little did I know that TV’s Shade would be a shadow (ha!) of his comic book self. One consolation is that like Mirror Master, there is a comic accurate Shade living on another Earth (as HR Wells so helpfully informs us), so maybe we can get the real deal Shade sometime in the future. I mean, how do you do the Shade without the top hat?

Kaitlin Snow’s descent into Killer Frost continues. This week, we get to see a sick cool Vibe vision of a fully formed Killer Frost going against a newly costumed Vibe. We’ve been waiting and somewhat dreading Kaitlin’s stone cold heel turn, but the question remains, will the most beloved member of Team Flash really have it in her to go full killer Killer Frost?

Wally West has one of the most unlikely origins in comics. For Flash newbies, West was struck by lightning in a freak duplication of the lightning strike that gave Barry Allen his powers. There has to be some serious suspension of disbelief at work when considering that origin, which is probably the reason that the writers and talent behind The Flash chose to go another route.

Savitar was a Wally West villain so it’s more than appropriate that the god of speed would play a role in Wally’s TV superhero origins. But when will we see the yellow suit for real, because so far the series has made the arrival of Wally’s inevitable powers a reason for anxiety rather than celebration, and that’s an interesting twist.

It is a very Wally/Kaitlin/Cisco-heavy episode this week, but Barry is front and center as well as the guilt of Flashpoint is Flash’s central conflict of the season. It seems that Savitar is the newest consequence of Barry’s meddling with time, so things are going to get worse before they get better as far as Flashpoint fallout is concerned.