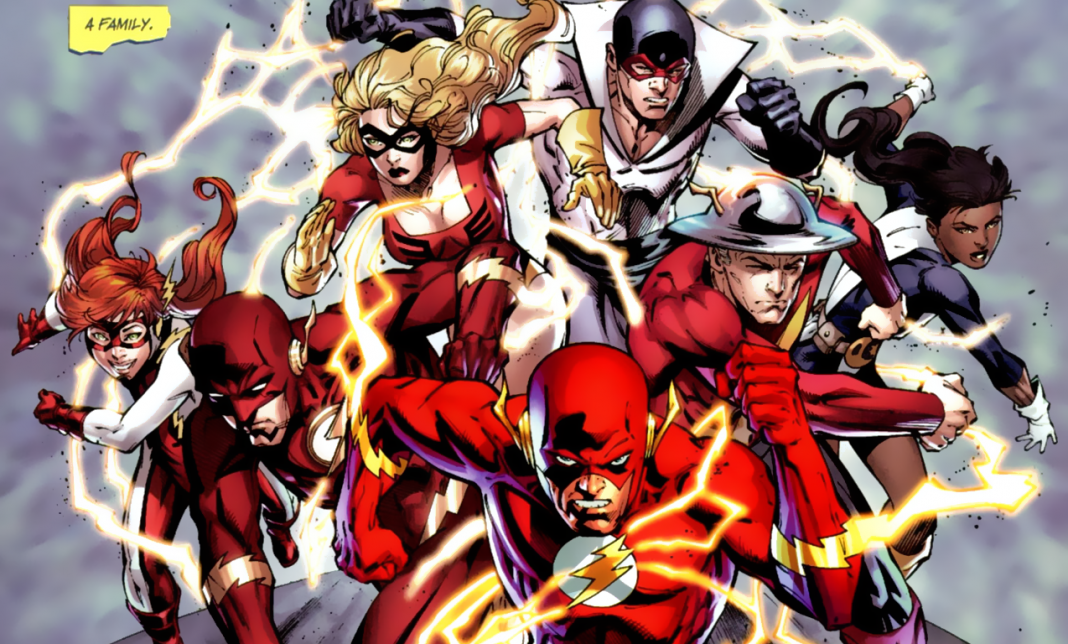 Thanks to the popularity of CW’s The Flash, everyone’s a speedster nowadays. Aside from Barry Allen’s Flash, who are the other important speedsters you should know about? Here’s a handy guide to the ten greatest speedsters in the DC Universe….who will probably show up on The CW series and initiate a love triangle with Iris sometime before the end of 2018. Anyway….HERE WE GO!

By far my favorite Flash (and no, not the one portrayed in CW’s series), Barry’s nephew in the comics used to be Kid Flash, Barry Allen’s sidekick, and one of the original members of the Teen Titans alongside Dick Grayson’s Robin. Wally West is actually the definitive Flash for me, when he took up the mantle after Barry’s death in Crisis on Infinite Earths.

He disappeared for a while and returned during Pre-New 52’s The Lightning Saga, only to be reinvented completely post-New 52. He’s back now as part of DC’s Rebirth initiative, because somebody finally knocked some sense into DC and they realized that Wally is indeed worth reinstating back in the original timeline. Wally was also the primary Flash in the Justice League Unlimited cartoon series, as voiced by the awesomely funny Michael Rosenbaum.

While John Wesley Shipp’s incredible performance as another Earth’s Flash is incredible to behold, Jay Garrick is actually the Golden Age Flash in the 1940’s comics. He became chairman of the Justice Society of America, where he would speed away and dish out his hasty brand of justice with that totally cool plate on his head (fashioned after his father’s World War I helmet).

Jay Garrick, however, doesn’t get his speed from the Speed Force, but rather, from the fact that he inhaled hard water vapors that mutated some of his DNA. While he’s slower than the other Speed Force-powered speedsters, his main advantage is that he can still use his speed without a hitch regardless of any disruptions in the Speed Force.

Forget about Smallville’s incarnation of Bart. In the comics, he is Barry Allen’s grandson born in the future. Because of his hyper-accelerated metabolism, Bart aged faster than he should, and to save his life, his grandmother Iris West-Allen had to send him back in time to the present. Here, he founded the team Young Justice, became the next Kid Flash, and eventually The Flash (even if only for a short period of time).

Talk about a twisted obsession! Debuting in The Flash issue 139 (1963), Eobard Thawne, a resident of the 25th century, idolized Barry Allen so much that he wanted to recreate the lab accident that gave Barry his powers. He then traveled back in time and wanted to become Barry himself, effectively killing Iris West. In the comics’ Flashpoint storyline, Thawne traveled back in time and killed Barry’s mother, which is what the CW’s series based Barry’s history on.

As the second Reverse-Flash, Hunter Zolomon went cray-cray when his mom was murdered by his dad. He truly believed that Wally West needed a degree of tragedy in his life to make him an even better superhero. He then decided to cause Linda, Wally’s wife, to miscarry their twins (who eventually became the Tornado Twins) in an effort to mold him into a better Flash. Yep, it doesn’t get any crazier than that.

The Black Flash has always been sort of a manifestation of death for all speedsters. Like the Grim Reaper, the Black Flash shows up whenever anyone connected to the Speed Force is nearing his or her end. Not much is known about this mysterious incarnation, but in Season 2 of CW’s series, the Time Wraiths kind of act like the Black Flash at by dragging errant speedsters away to their demise. Zoom disintegrated and looked a lot like the Black Flash during that split second, so could it be…?

During the Golden Age, superheroes Johnny Quick and Liberty Belle had a daughter named Jesse Chambers, who inherited superpowers from her mother and a speed formula from her father. As Jesse Quick, she fights crime alongside other heroes in the Teen Titans and the Justice League.

Violett Beane recently manifested supers-peed in the CW series as Jesse Quick as well, so we’re definitely staying tuned for what happens next!

Despite the risk of having a Marvel legal showdown, Max Mercury was originally named Quicksilver. He’s a time-traveling speedster whose mystical connection to the Speed Force makes him a kind of mentor to the younger and newer speedsters. The New 52 reboot hasn’t really revamped Max Mercury just yet, but with Rebirth, anything’s possible. And with the multiverse expanding more and more in the CW series, who knows, right?

I’m not a big fan of the Speed Force storm that granted a whole bunch of people super-speed in the new Rebirth storyline, but the speed storm did produce a rather cool-looking villain named Godspeed. When August Heart, Barry’s colleague at the CCPD, gets infused with the Speed Force’s power, he becomes a crazy serial killer who can siphon off the speed of other speedsters in addition to his own.

Savitar got his powers when the experimental plane he was on was struck by lightning (of course), granting him super-speed instead of roasting him alive (because why not). A little like Godspeed, Savitar can also suck out others’ speed, and he steadily gained a cult of loyal followers who basically worshiped him. He’s pretty much absent in the current comic storylines, but he’s been confirmed to appear in this season of CW’s The Flash.

Who’s YOUR favorite speedster? Do you wish you could see them sprinting about in live-action iterations, or do you honestly think there are too many speedsters crowding the small screen? Sound off in the comments below!