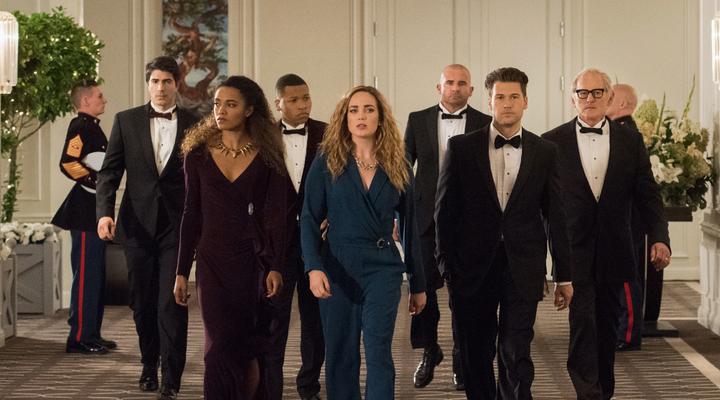 These are the 5 things that kicked us in the gall bladder (and sometimes in a good way) as we watched Legends of Tomorrow Season 2 Episode 5: “Compromised.” And, our observations are a little “spoilery,” so…if you’re catching this tonight, I would bookmark this article and join us tomorrow morning. Still with us? Good, we’re always glad to have ya’.

It’s funny, so far this season, DC’s Legends of Tomorrow has done a better job making Damien Darhk a potent villain than Arrow did during most of its last season. Don’t get me wrong, it’s always a pleasure to see Neal McDonough chew scenery as Darhk, but there’s just something dangerous and vicious about Darhk in Legends. Maybe it’s the anachronistic nature of his appearances or maybe it’s the fact that someone so vile is now futzing with the timestream, but I’m totally buying Darhk more as a chronal threat than I did as a threat to Star City.

With that in mind, I think Sara really screwed up revealing Darhk’s future defeat, especially since he is teaming with Eobard Thawne now. Expect Darhk to undo his final defeat by Oliver Queen thanks to Sara’s unadvised information dump.

I think we’ve seen a 1980s young man named Marty try to traverse the timestream before, haven’t we? But this week, we met another 80s time-hopper named Marty, but this one was a brilliant old man named Marty Stein that arrived not in a DeLorean but in a time ship.

Martin Stein is the heart of Legends of Tomorrow. Victor Garber is the glue and the class that holds this series together and it is an absolute delight to see Garber’s Stein interact with his callous younger self this week. It’s these kind of time tossed moment that make Legends a pleasure to watch, and it’s these types of moments that made me happy that Legends had its episode order increased.

Mick Rory and Ray Palmer. Have Heat Wave and the Atom ever even met in the comics? They must have at some point, but they certainly never teamed up. Heat Wave and Atom — not exactly Batman and Superman or Green Lantern Green Arrow — have been the most compelling pair of TV buddy heroes that we’ve seen in a long time (sorry, Lethal Weapon).

They’re just fun to watch as Atom is the brains and Heat Wave the brawn, as Atom is the strategy and Heat Wave is the donut-chomping impulsive hammer. Somehow this unlikely pair just make each other better. It’s also nice to not to have to sit through another mopey, futile, Ray Palmer love storyline.

When the JSA made their stirring debut on Legends, Obsidian was a standout member. The shadow-wielding hero certainly had the coolest costume of the bunch and his powers just popped off the screen. The producers of Legends must have felt that way as well because they went and got Lance freakin’ Henriksen to play the elder Obsidian.

In the comics, Obsidian, real name Todd Rice, was the son of Alan Scott, the Golden Age Green Lantern. Obsidian has long been an out, gay superhero and bravo to Legends for adding that aspect to the character. This week, it is revealed that Obsidian survived the JSA’s final mission because the government did not trust a gay man to go on such an important operation during the Cold War. Henriksen brought a class and an honorable sadness to this role and I hope we get to see the classic genre actor and his Obsidian join the Legends on more adventures.

Seeing Darhk and Reverse Flash on screen together certainly foreshadows a dire future for our Legends. And the Legion of Doom is only going to grow. I really like how this season is panning out. Instead of the Legends chasing one threat, the series has become sort of Quantum Leap meets Justice League with the impending threat of Darhk and Thawne ever present. It’s a good story engine for a series, and so far, it’s working.