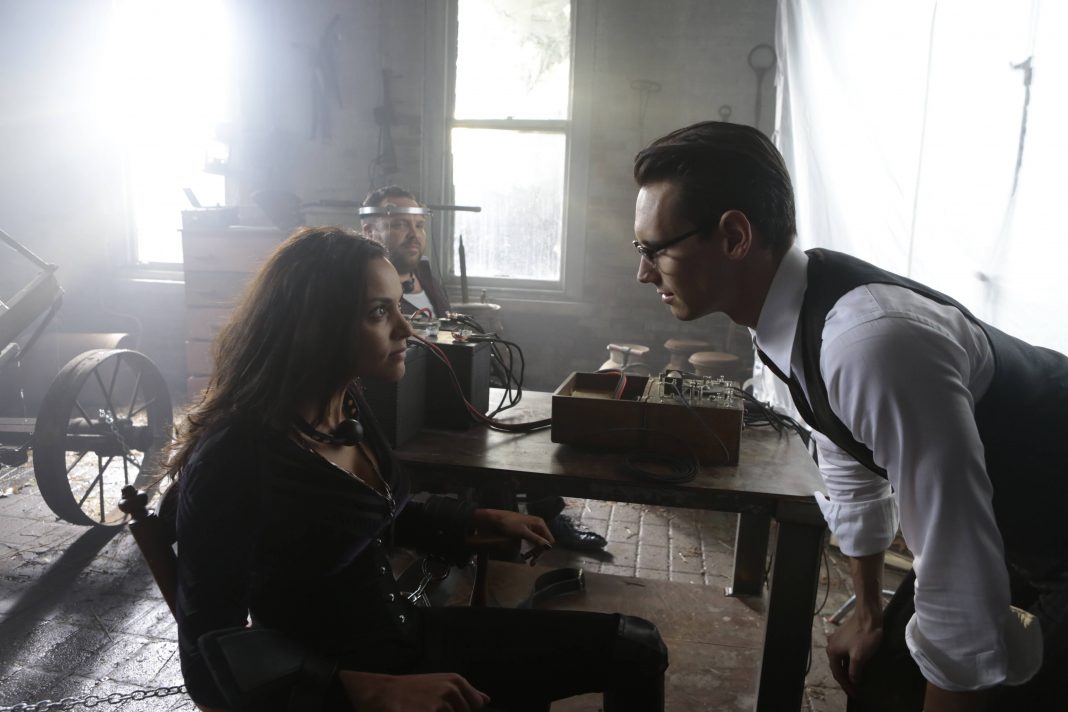 These are the 5 things that kicked us in the gall bladder (and sometimes in a good way) as we watched Gotham Season 3 Episode 10: “Time Bomb.” And, our observations are a little “spoilery,” so…if you’re catching this tomorrow, I would bookmark this article and join us afterwards. Still with us? Good, we’re always glad to have ya’.

Another hand removal? What is this- Star Wars? Yes, this week, Tabitha Galavan, the fatale beloved by both Butch and Barbara Kean, has her hand sliced off by a grief and vengeance-fueled Edward Nygma. Nygma thinks Butch and Tabitha are responsible for the death of his beloved Isabella, and tortures the pair until he forces Tabitha to choose between Butch’s life and her own hand. Tabitha chooses her big lug’s life over her appendage and we have another Gotham character with a lost hand.

To be honest, the Nygma sequences are the episode’s highlight as Cory Michael Smith continues to just nail the mad man descending into madness shtick. By the end of it all, Nygma realizes that Butch is not responsible for the death of his lady love and is off to find the responsible party. Now, Barbara Kean realizes that the Penguin is responsible for all of it, so we could have quite the interesting gang war in store as Riddler takes out Penguin — and Barbara, Butch, and Tabitha are left to pick up the pieces.

Things will get even more brutal as it has also been revealed that Mario is infected with Alice Tetch’s monster-making blood. So I guess the never-ending Nathaniel Barnes plot line was just to make the viewer aware of how dangerous the blood could be? That could have been accomplished in a single episode instead of devoting a third of the season to it. Oh well, the infected Mario is more interesting anyway because it pulls Gordon and Lee Thompkins into the mess in a very personal way. Ain’t nothing wrong with super-powered monsters versus a super-powered bird cult.

3. A Bullet for Bullock

Harvey Bullock is back as captain of the GCPD and finally, everyone’s favorite and slovenly gum shoe has something to do this season. Seeing Bullock and Gordon work a case together is a breath of fresh air as the two have become the best buddy cops on TV. And it is a relief to not have the constantly conflicted and one-note Nathaniel Barnes serving as the prerequisite angry authority figure. Let’s keep Bullock in charge for quite a while, and make Gotham great again!

I once hated the character of Barbara Kean. She was like a snotty society brat that added nothing to Gotham. Now, Kean is a major player that can pull the strings of any of Gotham’s power brokers. I love how she has taken on the Cersei Lannister role of a manipulative, immoral and brilliant woman who sits back in the wings and strikes when the right moment arrives. Now that Penguin has murdered Isabella and framed Butch, that moment is now.

I also dig how Bruce, Alfred, Selena, and Ivy have kind of become a de facto Scooby Gang, ing to solve the Mystery of the Owl Key. Of course, Bruce promised the Court he would not interfere in its business, but now that he is involved in an intrigue within the deepest recesses of the Court’s power structure, it looks like baby Bats is going to have to man up and go Owl hunting with his crew of mystery solvers. Jinkies!