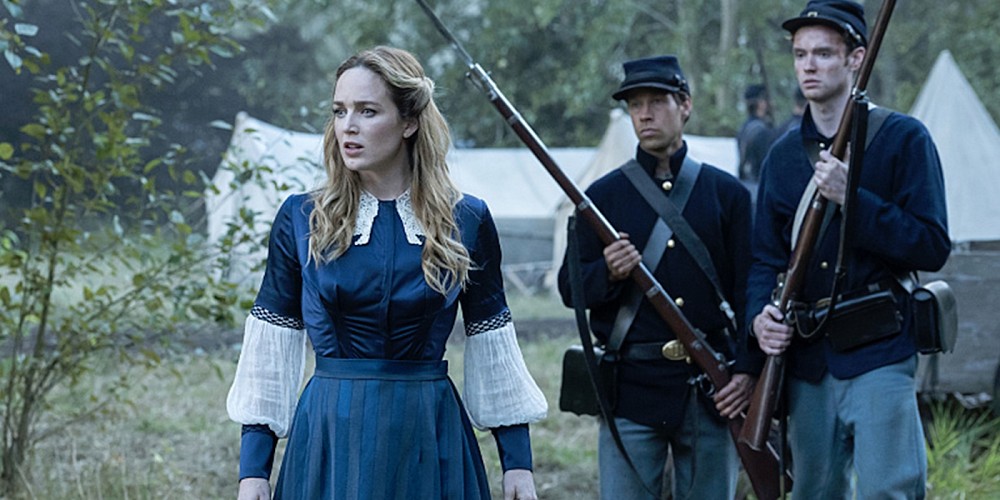 These are the 5 things that elbowed us in the basal ganglia (and sometimes in a good way) as we watched Legends of Tomorrow Season 2 Episode 4: “Abominations.” And, our observations are a little “spoilery,” so… if you’re catching this later, I would bookmark this article and join us tomorrow morning. Still with us? Good, we’re always glad to have ya’.

Between this week’s Civil War (the real one, not the Iron Man one) drama and last week’s visit to Feudal Japan, DC’s Legends of Tomorrow has hit a stride between historically relevant and wonderfully absurd. I mean, how do you mash up a modern day black man’s reaction to the brutality of slavery with freakin’ Confederate zombies? It’s one of those things that shouldn’t work but does within the unique parameters of the show. The dehumanization of slavery is honest and unflinching as Legends does not flinch away from some of history’s ugliness. And then there’s zombies. So, bravo for not being afraid to be honest while not being afraid to be very, very silly.

Speaking of Jax, the young half of Firestorm has indeed become the heart of the show. This week, Jax confronts the horrors of slavery during the Civil War and proves himself every inch the hero even when he’s not joined with Martin Stein as Firestorm. This week, Jax continues a mission for a black Northern spy and delivers vital information to the Union — while fighting zombies. There is such an earnestness to this incongruous tale that it never collapses under the weight of the very unlikely concept of the episode — all because Jax and his heroism keeps everything grounded.

Last week, Ray Palmer lost his Atom suit and it seemed like this would bring the Legend one step closer to his more traditional, unarmored Atom look. But this week, Palmer’s tale takes an unexpected turn. You see, Mick Rory is infected by the zombie plague (the plague arrives from the future via time pirate — timey wimey). Palmer risks life and limb (without the Atom suit) to deliver a cure to Rory. To thank Palmer, Rory gives the former Atom Len Snart’s cold gun. Now, the team of heat and cold is back as Palmer will wield the fallen Captain Cold’s weapon. It seems like the passing of Excalibur when Rory gifts Snart’s weapon and this should open some serious story potential for the two former adversaries. And it will be very interesting if and when Snart returns.

Sara Lance is also going through some growing pains this week as she gets used to being the team’s leader now that Rip Hunter is MIA. It is pretty trippy and cool to see Sara get leadership advice from Ulysses S. Grant of all people as he instructs her on how to deal with the potential loss of her crew. For those of us that have been following Sara since her Arrow days, this is some fun character progression as she goes from lone wolf to skilled leader.

Last season, Hawkman and Hawkgirl never quite gelled with the Legends. I mean, it was a DC fan’s dream come true to see live-action Hawks kicking ass, but the series focused more on obvious and tedious love triangles rather than the ‘epicness’ of the Hawk concept. This season, the team is rounded out very nicely by the JSA’s Vixen and the newly created Steel.

Steel has this great ‘awe shucks’ sincerity as he learns to be a hero and Vixen has this regal bearing that makes her stand out as a Legend. The series has really found a way to visually represent Vixen’s powers, but darn it, Steel needs his classic costume so he doesn’t look like a poor man’s Colossus.