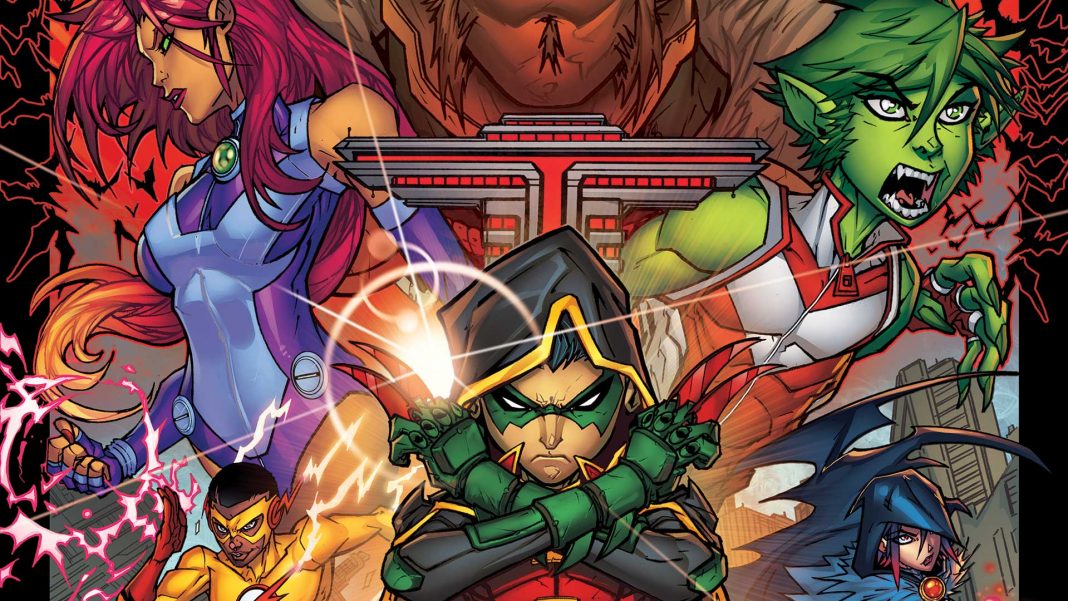 Check out Our Review [WITH SPOILERS] of Teen Titans #1!

It’s Damian Wayne’s thirteenth birthday and he may need a miracle to make it to the next one! While most kids would be considering his future at this age, Robin is more mindful of his past! Ra’s Al Ghul is coming and he’s bent on making sure his grandson becomes a true assassin. If Damian wants to take control of his destiny, he’ll need a team to help him out. Can these new Teen Titans win the day or will they be lambs led to the slaughter?

I’ll be honest; I’ve been hyped for this issue since Teen Titans: Rebirth. I wanted to see just what threat the Titans were going to face and why Robin would even bother bringing them together. Thankfully, this comic did not disappoint!

Jonboy Meyers’s artwork continues to knock it out of the park. It’s uniquely expressive and also dynamic during the action scenes.

I particularly liked the use of color in this issue. There was a nice contrast between the dark ominous shadows of Wayne Manor and Infinity Island, to the brighter colors of Robin’s base and the other Titans’ costumes. I think this gives the comic personality and I hope we get to see more of it as the series goes on.

Benjamin Percy also continues with great writing and dialogue. Seems like he made up for lost time with Damian, because Robin was the certainly the centerpiece this issue.

I really liked Damian’s reflection on his age and how it mixed in with his inner-loneliness. Damian has very few people he cares about (some are even dead now), least of all of his own age. So, when we see him admit to the others that he doesn’t have friends, it’s actually pretty sad; this is probably because Damian always seems so sure of himself.

It also tied into the theme of “running away from something” from last issue. In Robin’s case, he’s running from having his future decided for him. Damian has lived in the shadows of both Batman and Ra’s Al Ghul his whole life, so this makes sense. He’s tired of being pulled in two directions and just wants control of his own future, which actually makes Damian relatable. And heck, he even givess a great speech to the others about this, too! I think Percy really set up this team to grow stronger together and I can’t wait to see what comes from that!

If I had to make one complaint, it’s that this comic spent most of its time focused on Robin. Maybe that’s me nitpicking, but there were times it felt more like an issue of Robin than Teen Titans. Still, that’s a minor cloud in a whole sky of awesomeness!

Overall Teen Titans #1 was a great follow-up to its Rebirth issue and I can’t wait for issue #2! It’s a bright new beginning in Teen Titans history and I highly recommend this comic and Teen Titans: Rebirth. With amazing art, great writing, and the promise of Titans versus Assassins, what more could you want?