Home COMICS 6 Awesome Facts About the Justice Society of America! 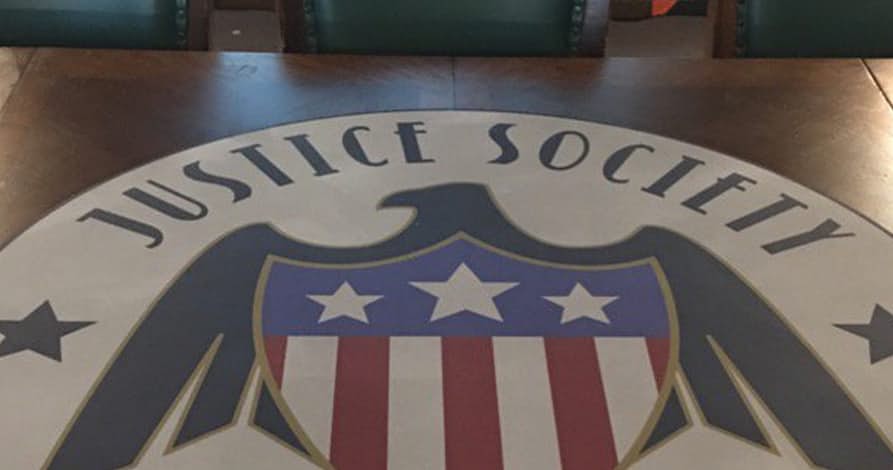 Legends of Tomorrow returns to television October 13th and this time they’re bringing the Justice Society of America along for the ride! Perhaps not as well-known as the Justice League, the JSA are a cool little corner of DC Comics with tons of unique members. There are a lot of awesome things about the JSA and knowing all of them makes us even more excited to see them in Legends of Tomorrow season two! So grab your capes and maybe a couple of super-friends as we take a look at 6 awesome facts about the Justice Society of America!

The Justice Society of America stands out above the rest as being the first superhero team ever created! Debuting back in 1940’s All-Star Comics #3, the team consisted of many Golden Age heroes (such as The Flash, Green Lantern, Hawkman, and Doctor Fate), and most would be mainstays of the team for years to come.

You could say that the JSA were precursors to the Justice League, inspiring certain aspects that the League would take on in later years. Now, consider this: without the JSA there’s a good chance many things we’re familiar with in today’s DC Universe may not have existed! Speaking of which…

Some of you might be surprised to hear that the Justice Society helped bring us the greatest superheroine of all-time! All-Star Comics #8 was the first appearance of Wonder Woman, who had a backup story alongside the JSA’s adventures. The story tells the classic origin we’ve come to know, where Diana meets Steve Trevor after he crash lands on Paradise Island.

She would even go on to join the JSA at one point…as their secretary (well…it was the 40’s after all), but she eventually did join the team as an active member! While her legendary story would continue in Sensational Comics, Wonder Woman owes her existence to All-Star Comics and the Justice Society for introducing her to the world!

The Spectre is a ghostly spirit of the DC Universe who punishes the wicked with cruel, supernaturally conjured torture! He was also a founding member of the JSA! Yeah, this was one of the rare occasions where the usually violent Spectre was a team player! While it didn’t last forever, the JSA will forever be a part of the Spectre’s history, and that in itself is pretty cool. Hey, I’m just glad he’s on our side!

Speaking of violent JSA members, here’s Black Adam! Some of you know him as Shazam’s archenemy and ruler of the fictional country, Kahndaq. But aside from his long career in villainy, Black Adam also tried to be on the side of good and once became a member of the JSA.

While he wasn’t exactly a shining example of heroism, he did give it the old college try and even became good friends with fellow JSA member, Atom Smasher! Eventually, Black Adam went back to his old ways and quit the Justice Society, who would occasionally butt heads with him every now and again. While it wouldn’t be the last time Adam tried to be a hero, the JSA left a mark on him from that point on. So, will we see Back Adam in Legends of Tomorrow? Probably not, but hey…you never know.

The Justice Society are not only famous for saving the world a number of times, but for helping young heroes reach their full potential! The original Flash, Green Lantern and Wildcat make for pretty good teachers, since they’ve been wearing the capes and costumes longer than anyone else in the DC Universe. Their star students range from lesser known heroes Jesse Quick, Cyclone, and Citizen Steel, to more famous heroes like Black Canary, Star Girl, and even Batman! They also helped continue many legacies of classic heroes, becoming father figures for heroes of the DC Universe! Honestly, there’d be a lot less good guys running around without the help of the JSA!

While Barry Allen meeting Jay Garrick was really the spark the lit the fuse, the Justice Society did play a key role in the creation of the DC multiverse! One of the most famous examples of this was in Justice League of America #21, where the JLA teams up with the JSA to stop villains threatening both worlds! The comic would introduce aspects that would become essential parts of DC lore, such as Earth-3 (where heroes are villains and villains are heroes)!

From there this opened up the door for many stories that involved alternate Earths, such as Kingdom Come, Red Son, and Crisis on Infinite Earths! So many things that made the beginnings of DC feel so exciting and expansive can be traced all the way back to the JSA! While they may not be the most famous team from DC, they did leave a mark that’s still important to this day!

Are you excited for Legends of Tomorrow season 2? Why do you think the JSA is awesome? Let me know below!