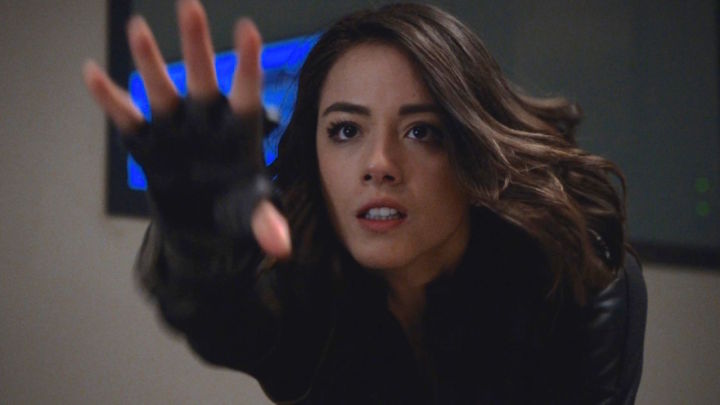 Check out Our Review [WITH SPOILERS] of Agents of SHIELD Season 3 Episode 15: “Spacetime”

Director Phil Coulson put it best last night: “Things got weirder.” Yep, Agents of SHIELD took both friend and foe… to the future!!! Well, kind of.

“Spacetime” gave us a new mutant… err… Inhuman (one day I’ll get it right) complete with precognition powers. Charles was a seemingly harmless homeless man, living in an alley. So what small-time power does Charles possess? How about the ability to give people a glimpse into their future? Right before his eventual HYDRA capturing, he delivered an impromptu fortune-telling to Daisy, which kicks her gears in motion.

-Daisy Is Taking Care of Business-

The episode’s primary focus was Daisy “don’t call me Skye” Johnson’s quest to rewrite her foreseen future. Her glimpses included a sweet fight sequence, Agent Coulson shooting at her, a bloodied Lincoln, and a dead Charles murmuring, “You were supposed to save me, before Daisy herself died. Not the kind of future she was probably hoping for.

So when Daisy looks to take action and change the future, Coulson stands in her way, not wanting to lose his top Inhuman. The SHIELD Task Force decides to prep Agent May for the mission instead, in an effort to deviate from the current timeline. But after a dragged-out training sequence, May is off the mission when her ex, Andrew Garner, reemerges… to let everyone know, his alter ego Lash is taking over his body (which eventually does happen). With May now dealing with that issue, it was Daisy’s time to shine.

So guess what? Everything begins to play out exactly how her premonitions said it would. There was a sweet fight sequence. I mean really sweet. A one-take shot that showed Daisy take down a plethora of HYDRA agents while only using her Quake powers once. Well done Agents of SHIELD for delivering yet another top notch fight sequence.

We also get Agent Coulson pointing his gun at her – well, at her reflection – in a two-way mirror. In a separate location, we saw Lincoln in the field… getting whooped and bloodied by Giyera, who then just leaves Lincoln alone for some reason. I guess there’s to be no Inhuman-on-Inhuman violence. We finally get to the last part of Daisy’s vision: standing on a rooftop, looking to save Charles. And then Gideon Malick shows up.

If there was a Co-MVP for this episode, it would be handed out to HYDRA’s current head, Gideon Malick. However, a question remains: how long will he be at the head of the evil organization?

We first see Malick in “Spacetime” waiting on Hive (who is now wearing clothes from The Matrix collection) when the artist formally known as Grant Ward asks him what he wants. It’s simple: power. Malick (and his family before him) waited generations to work with Hive, hoping the alien will assist him in conquering the world. Instead of obliging on the world-power angle, Hive has another idea: letting Malick know what true power is.

That takes us to Transix, the company behind Coulson’s mechanical hand. When Hive assists Malick in a buyout of the company (and by buyout, I mean sucks the juice out of the board of directors), we see what Hive really wanted: an exo-suit for Gideon. Once inside, Malick understands what true power it is, and literally uses that power to squish the head of Transix’s former president’s head. That brings us back to the rooftop.

It was short lived, but seeing a machine-powered Gideon Malick in action was pretty nice. Not so nice? When he was beating poor Daisy to death. When all seemed lost, here comes Charles who rewrites history by touching Malick (letting him see his future) and distracting the HYDRA head long enough for Daisy to quake-punch him and disable the exoskeleton. Sure, Malick escapes, but Daisy is alive. As for Charles, he dies, but not before offering Daisy one last look into the future.

-A Future Filled With Death-

Daisy’s new vision takes us back to the midseason premier. A Quinjet hovering over space, and as the camera pans… we see a crucifix, a SHIELD Agent in gear, and then an explosion. We still don’t know why there’s a Quinjet in space, or who is inside… but it doesn’t bode well for whomever was on board. However, we now know the future isn’t set in stone, so anything can happen.

Daisy wasn’t the only one getting a futuristic vision. Malick was also touched by Charles and his vision seemed to shake him. Riding in a helicopter during his escape, Malick’s hand is shaking while he tries to down a glass of wine. He tries to get his head of security, Giyera, back on his side, but his former number one was “right where he needed to be,” next to Hive.

Clearly, Malick’s vision had something to do with Hive. What it was, who knows. Will it impact the soon-to-be-released Captain America: Civil War? Let’s hope so. All we know now is that a super-powers registration act will soon befall the MCU, with Agents of SHIELD‘s Inhumans possibly getting caught in the crossfire.

The Coolest Easter Eggs From Stargirl So Far